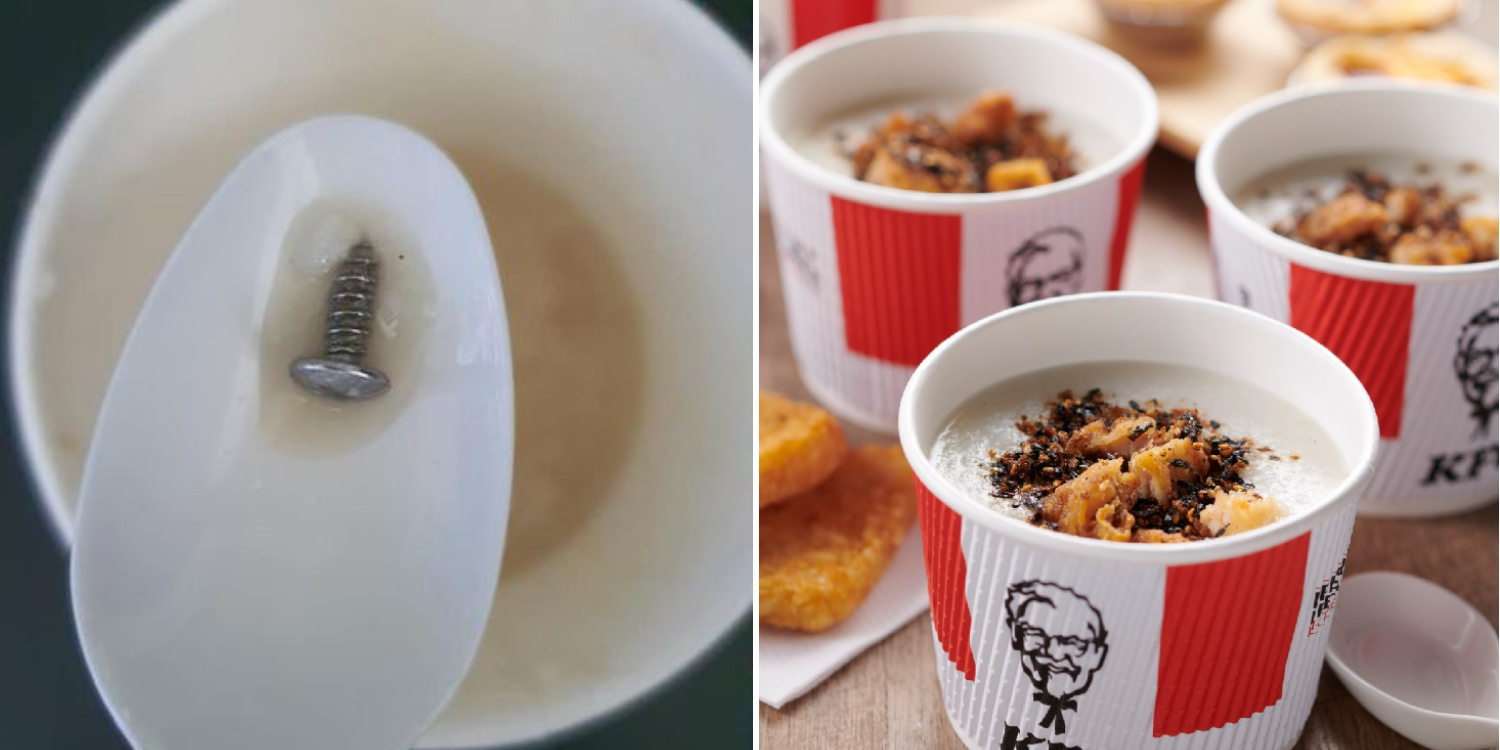 Woman Finds Screw In Porridge, Asks KFC To Look Into Their Hygiene Practices

UPDATE (2 Nov): KFC has responded to the woman’s post, saying that they are currently following up with her on the matter. Internal investigations are currently underway. You can read their statement in full below.

One of the best things about the weekend is waking up late and tucking into a hearty breakfast after that.

Unfortunately for one woman, her weekend breakfast quickly turned unpleasant when she found a screw in her porridge, which was ordered from KFC’s Punggol Oasis outlet. 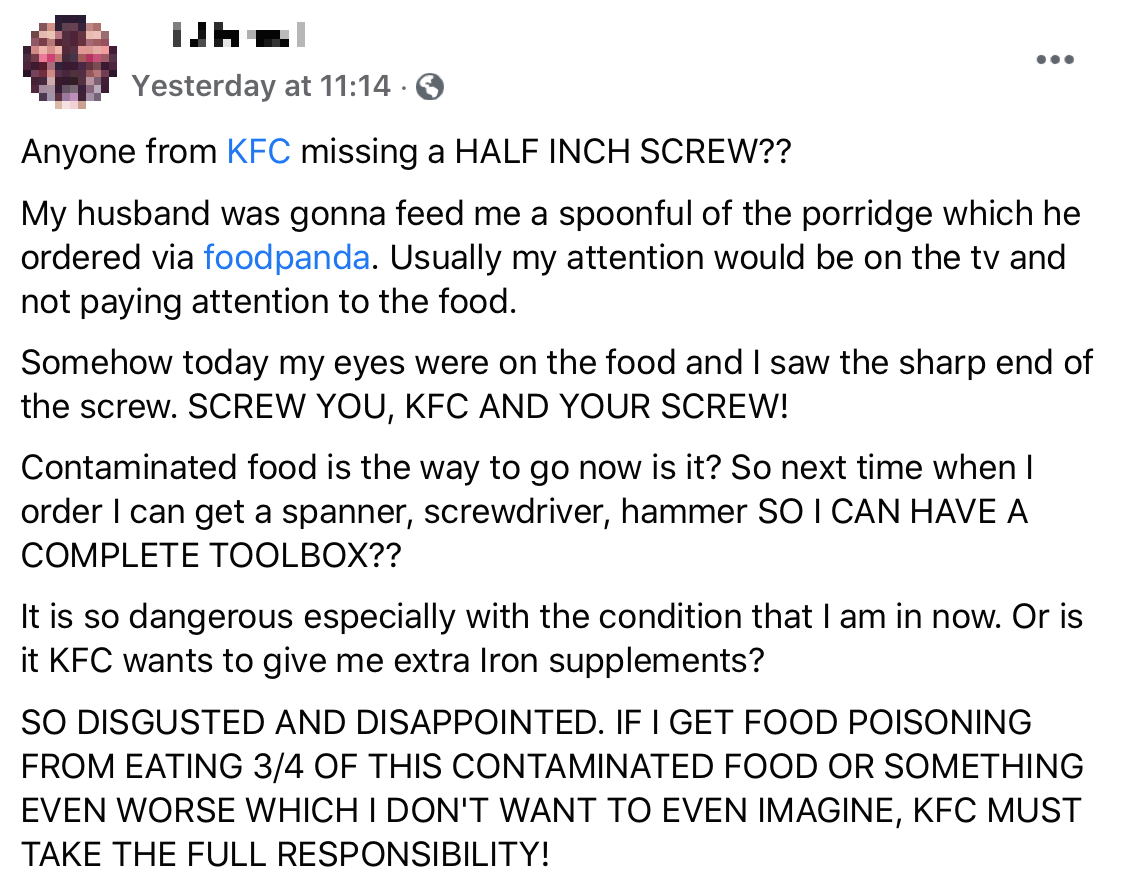 She also called on KFC to take responsibility for the contaminated food and implored them to look into this issue.

On Sat (31 Oct), a woman took to Facebook to share her shocking find when savouring a bowl of KFC porridge she ordered online. 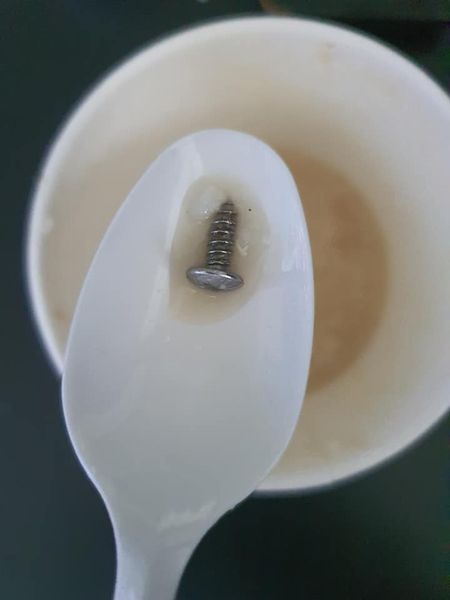 While her husband was feeding her a spoonful, she turned her eyes onto the contents of the porridge and saw a screw.

Apparently she has already eaten 3 quarters of the porridge and worries she might get food poisoning after eating most of the contaminated food. 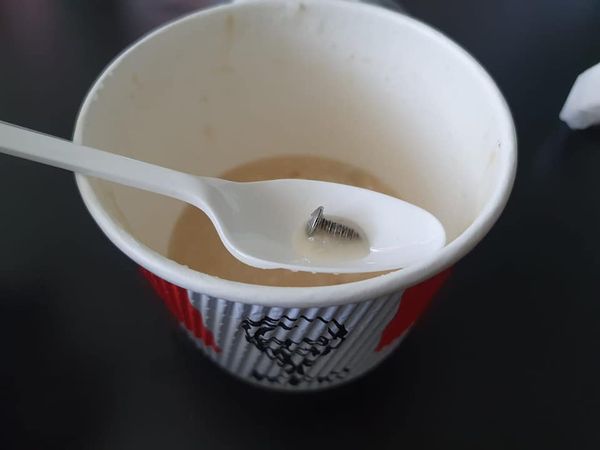 She went on to express disgust and disappointment and wondered if the food company had wanted to feed her ‘supplement’ for iron.

She urges KFC to take full responsibility for the incident.

KFC has responded to the incident. Here is their statement in full:

We deeply apologise for this unfortunate incident and would like to assure the public that food safety and hygiene is, and always will be, our top priority. We would also like to update that we have conducted a thorough investigation and have been working closely with the Singapore Food Agency (SFA) since the incident on 31 October 2020.

Upon receiving the feedback in the late morning of that day, KFC cross functional team immediately took action and went to the restaurant in question to conduct a thorough check on all kitchen equipment for any missing screws. This preliminary investigation carried out did not show anything unusual. However, we were determined to investigate further and conducted a full review of the outlet’s CCTV footage alongside repeated questioning of the staff. It was then discovered that the Assistant Manager was negligent in her actions by failing to report the matter of a faulty pot lid, which ultimately led to the regrettable incident.

KFC Singapore adopts a no tolerance policy for food safety and hygiene lapses as well as dishonest behaviour. Strict disciplinary action has been taken against the two kitchen staff and the Assistant Manager, who is currently under review for her employment.

We have reinforced our guidelines on equipment inspections and emphasis on integrity to prevent such unacceptable incidents from happening again.

We are deeply sorry for the distress caused towards [the woman] and her family, and have reached out to offer our apologies, and are regularly checking on her well-being.

Hygiene is arguably the most important requirement when it comes to preparing food. When food is not prepared with care, it can be contaminated with bacteria that can cause serious harm to customers.

We hope the lady remains in the pink of health, despite finding something shocking that doesn’t belong in her food.