The release of the Electoral Boundaries Review Committee report last Friday (13 Mar) has increased speculation that the general election is right around the corner. If this is true, residents might see their neighbourhood politicians ramping up on community activities. 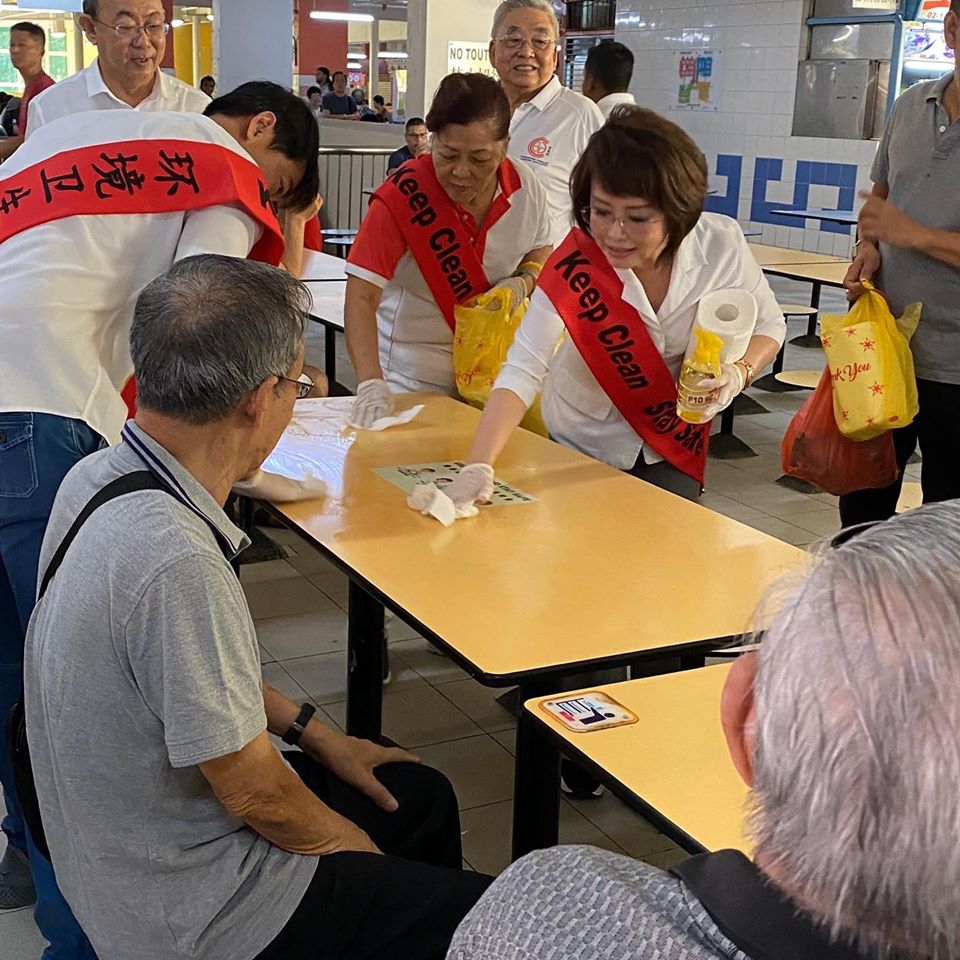 If the eye-catching red sashes with bold words are anything to go by, the stunt could well be the first hints of an upcoming election campaign.

Went from table to table to clean, talk to residents & stallholders

It seems like the continuing outbreak of Covid-19 and resulting SG Clean drive have given local MPs an opportunity to showcase their cleaning skills.

In a Facebook post on Sunday (15 Mar), Dr Neo said she took the opportunity to promote good public hygiene during a visit to Beo Crescent Market and Chinatown — not just by cleaning tables, but by encouraging diners to return their trays. 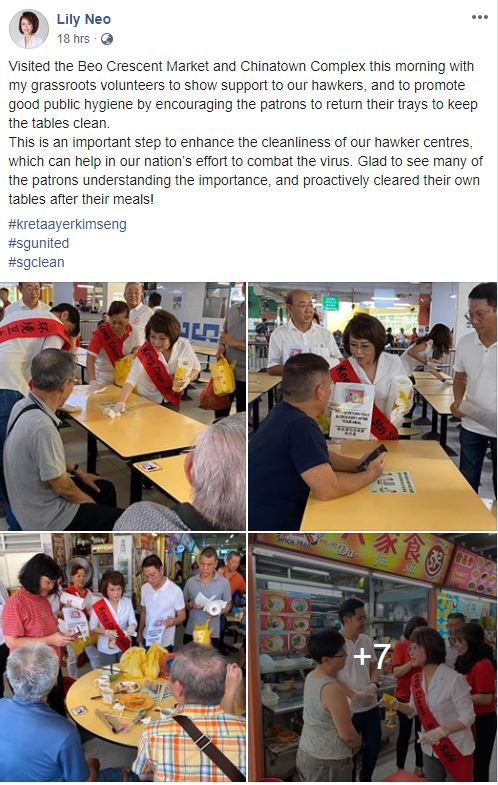 Donning a red sash with the slogan “Keep Clean, Stay Safe”, the MP for Jalan Besar Group Representation Constituency (GRC) flashed a flyer while explaining the need to return cutlery after eating. 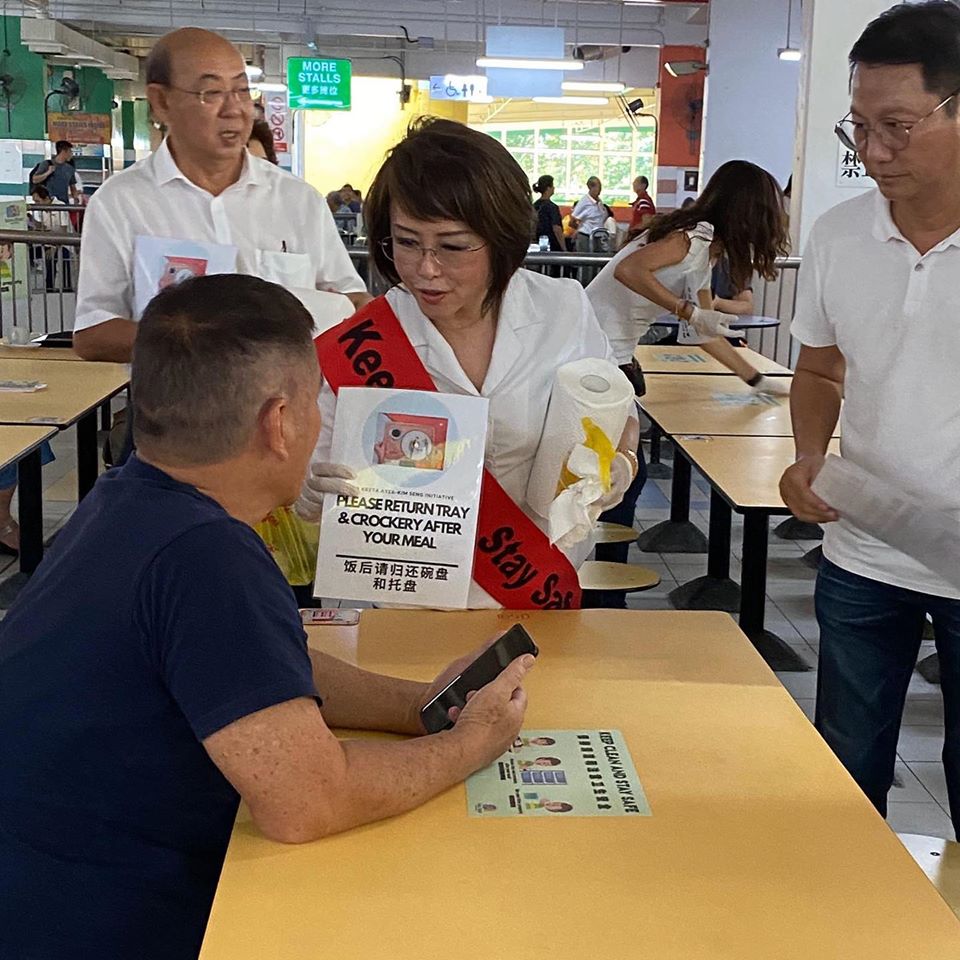 As other residents looked on, Dr Neo also chatted with stallholders like this porridge stall owner. 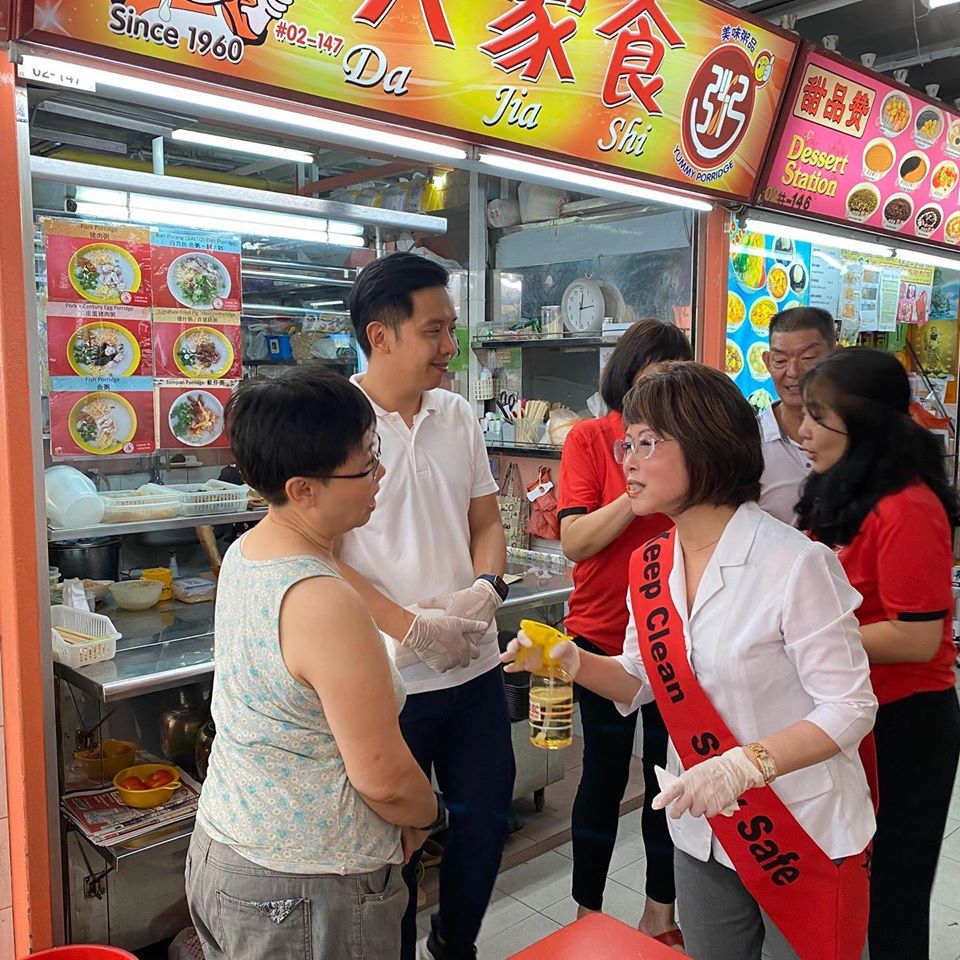 Dr Lily Neo in action could be because elections are near

A Facebook video of the visit by All Singapore Stuff showed a bit more of what Dr Neo did that day.

From the video, we see that a few other volunteers accompanied Dr Neo while appearing to be supply her with rolls of paper towelettes.

A view from the back shows her sash carrying the slogan saying “public hygiene starts with me” in Mandarin.

In the video, she also approached a group of women sitting around a table, and audibly told them, “Thank you all, I’m happy that your table is clean!”. 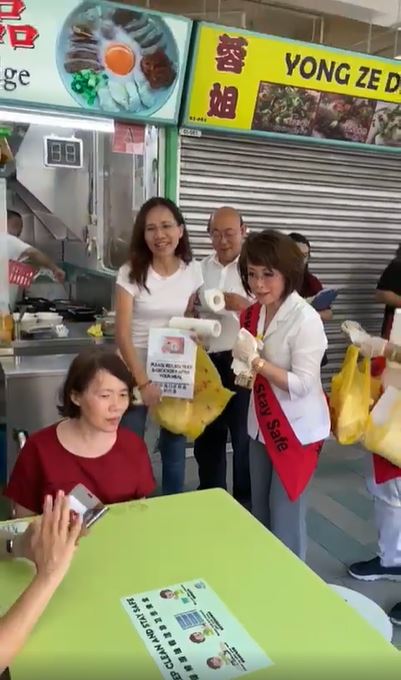 Sadly, they declined her offer to clean their table, sporting expressions that ranged from confusion to bemusement.

Mixed responses to her actions

The comments on the Facebook video were generally cynical, calling Dr Neo’s actions “wayang“, and obviously a stunt with an eye on the upcoming elections.

Others saw it as a sign that the elections are going to arrive very soon.

There were more thankful comments, however, on Dr Neo’s Facebook post, thanking her for her kind initiative. 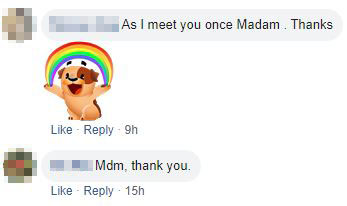 The General Elections amid the Covid-19 debacle

While some may interpret Dr Neo’s efforts to promote public hygiene as a way to score points amid the Covid-19 outbreak, it also highlights a large point of contention — should we even be holding elections amid the virus threat?

Many Singaporeans seem to feel that health should take priority over most things, elections being one of them.

Dr Tan, a former Presidential nominee, wants elections to only happen when Covid-19 is no longer a crisis.

TODAY Online quoted him as saying:

In the interest of the people, the Progress Singapore Party strongly urges the Government not to hold a general election while the Covid-19 pandemic is still with us.

Dr Chee, speaking to reporters at a blood donation drive in Dhoby Ghaut said on Saturday (14 Mar) that it would be “completely outrageous to even think of the elections right now”.

According to Channel NewsAsia (CNA), he explained that:

It is the worst of possible times for us to call for elections at this stage … (the People’s Action Party) cannot be more irresponsible to do something like this when we should be focusing our state resources, that the minds of Singaporeans at least on overcoming, conquering this virus.

However, Minister for Trade and Industry Chan Chun Sing responded to these statements by saying that opposition parties may be “getting ahead of themselves”. Explaining that Singaporeans’ welfare is still of utmost importance even with elections happening, TODAY Online quoted that:

Now we are entirely focused on the lives and livelihood of fellow Singaporeans. We are all in this together. We will spare no effort to make sure that Singapore comes through this (outbreak) much better than before.

At the time of writing, the video of Dr Neo’s deed has garnered over 1,700 shares on Facebook.

While her motives may be questionable to some, it still needs to be noted that it is a good effort by the MP in encouraging people to keep our environment sanitary.

The bottom line is, any effort helps, whether or not there are political motives involved.

While we can’t be certain whether this is a sign that the general election is near, we should still be appreciative that her efforts will help keep the neighborhood clean.