Lost Autistic Teen Helped By Couple Whose Son Has Autism Too, Both Families End Up Becoming Friends 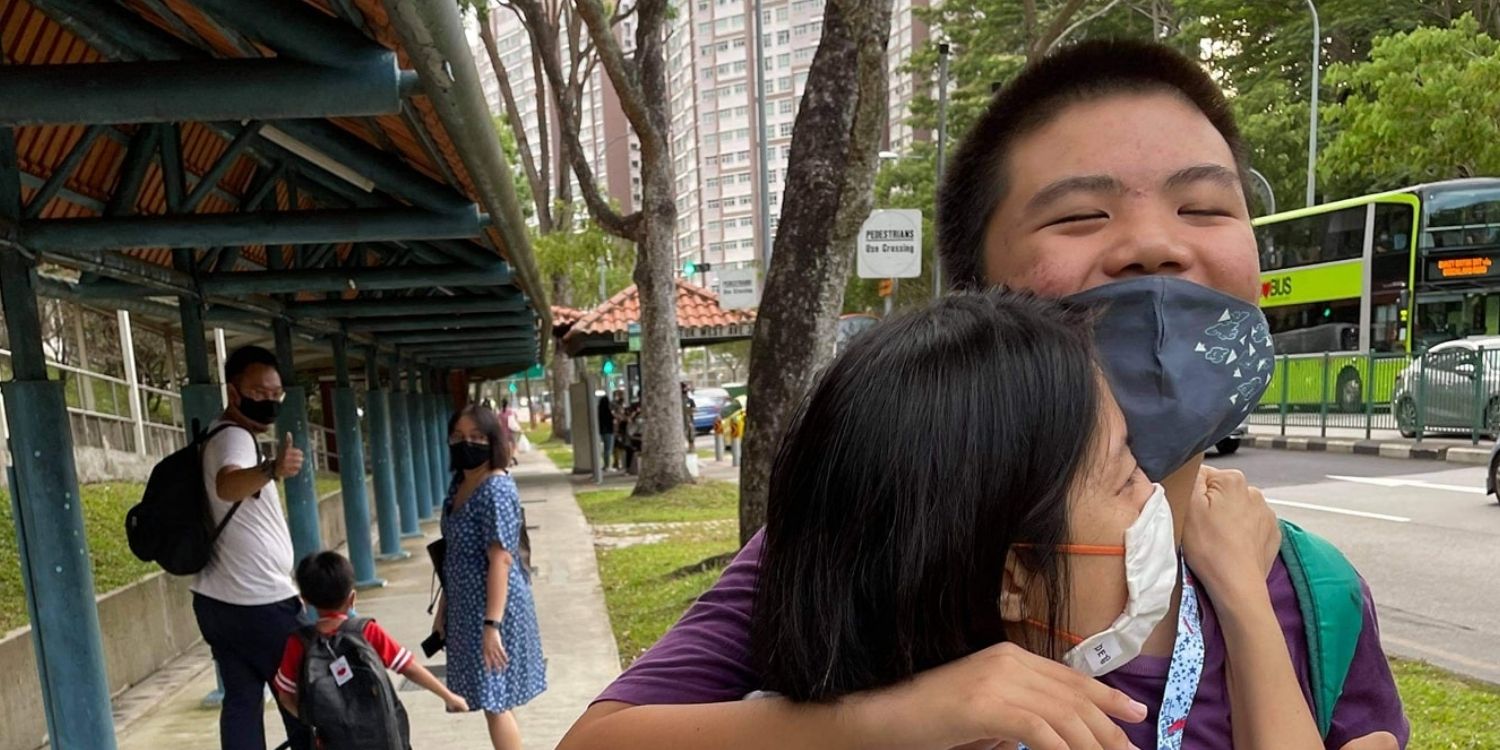 Bonding over a shared experience.

Those who’ve had the pleasure to interact with an autistic person will know that they see the world differently from most people.

So the parents of autistic children may be worried when they get lost in public, as strangers may not understand their unique behaviour.

When autistic teenager Junle got on the wrong bus, his parents were frantic.

Thankfully, he met a kind couple and they helped the family reunite. 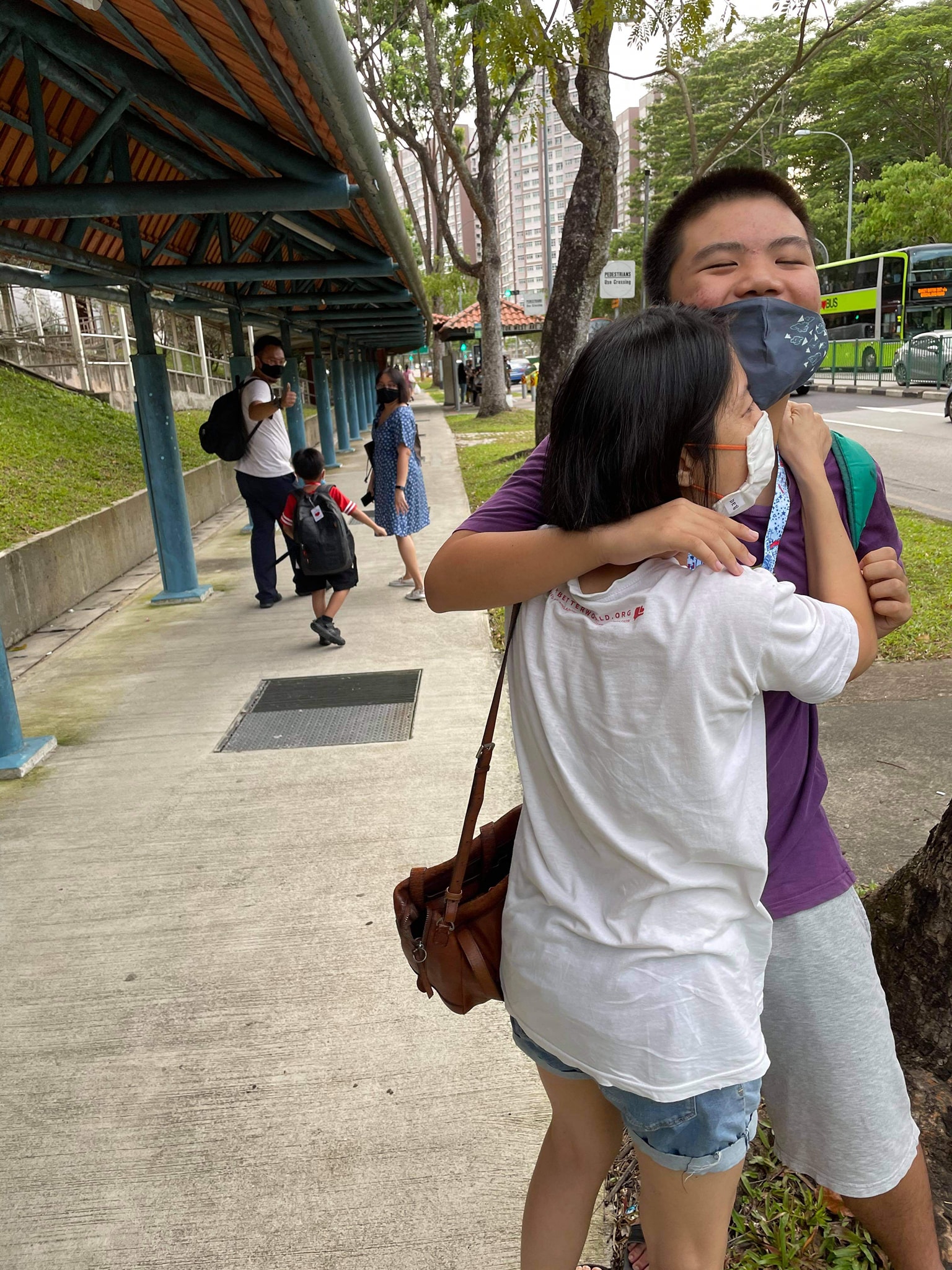 And in a movie-like twist, the couple who helped them also had an autistic son, so the families became friends.

Teen’s father was teaching him to take bus himself 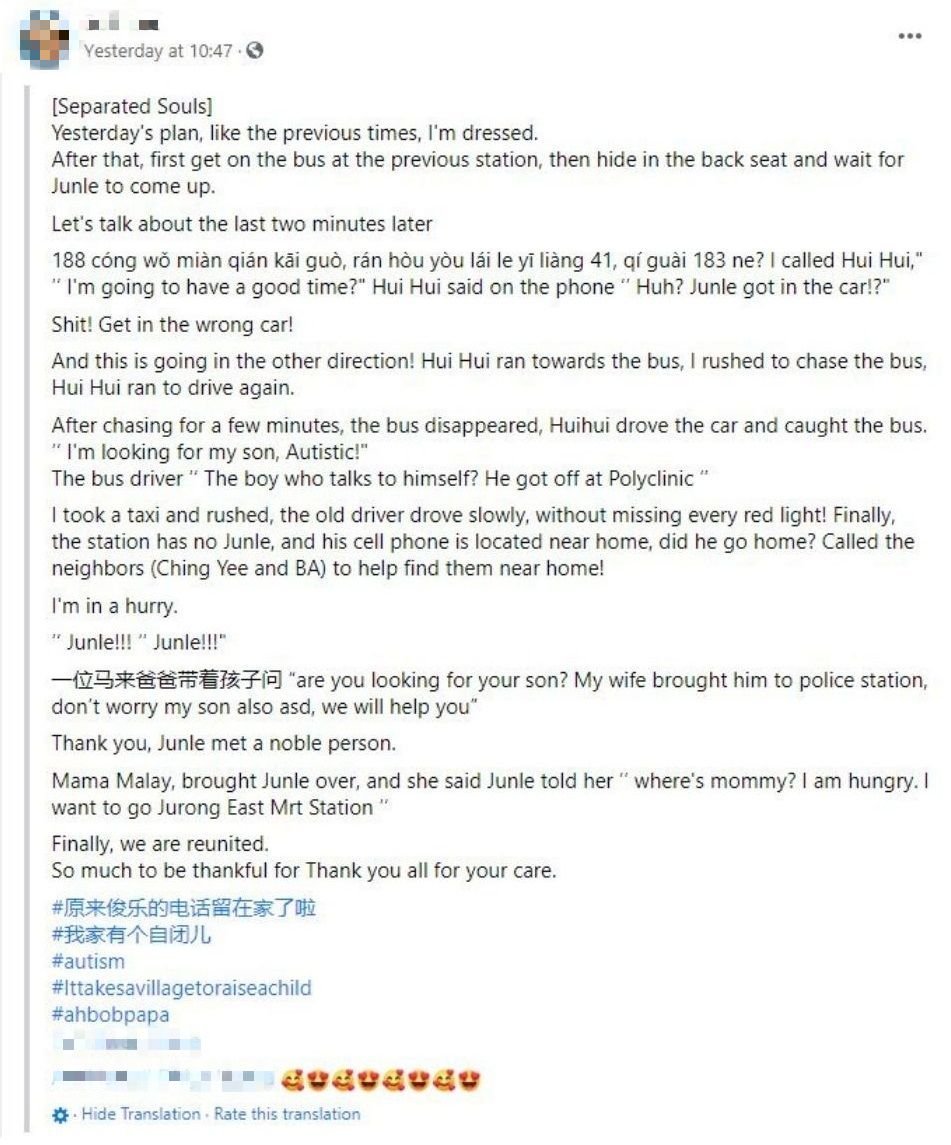 As a parent of an autistic child, Mr Lee would want his son to achieve some independence one day.

Thus, by way of teaching him to take the bus on his own, he would board the bus a stop earlier, then hide in the back and ask Junle to board the same bus.

However, on Thursday (1 Apr), this plan went wrong.

However, Junle boarded bus 188 instead, which went in a totally different direction. 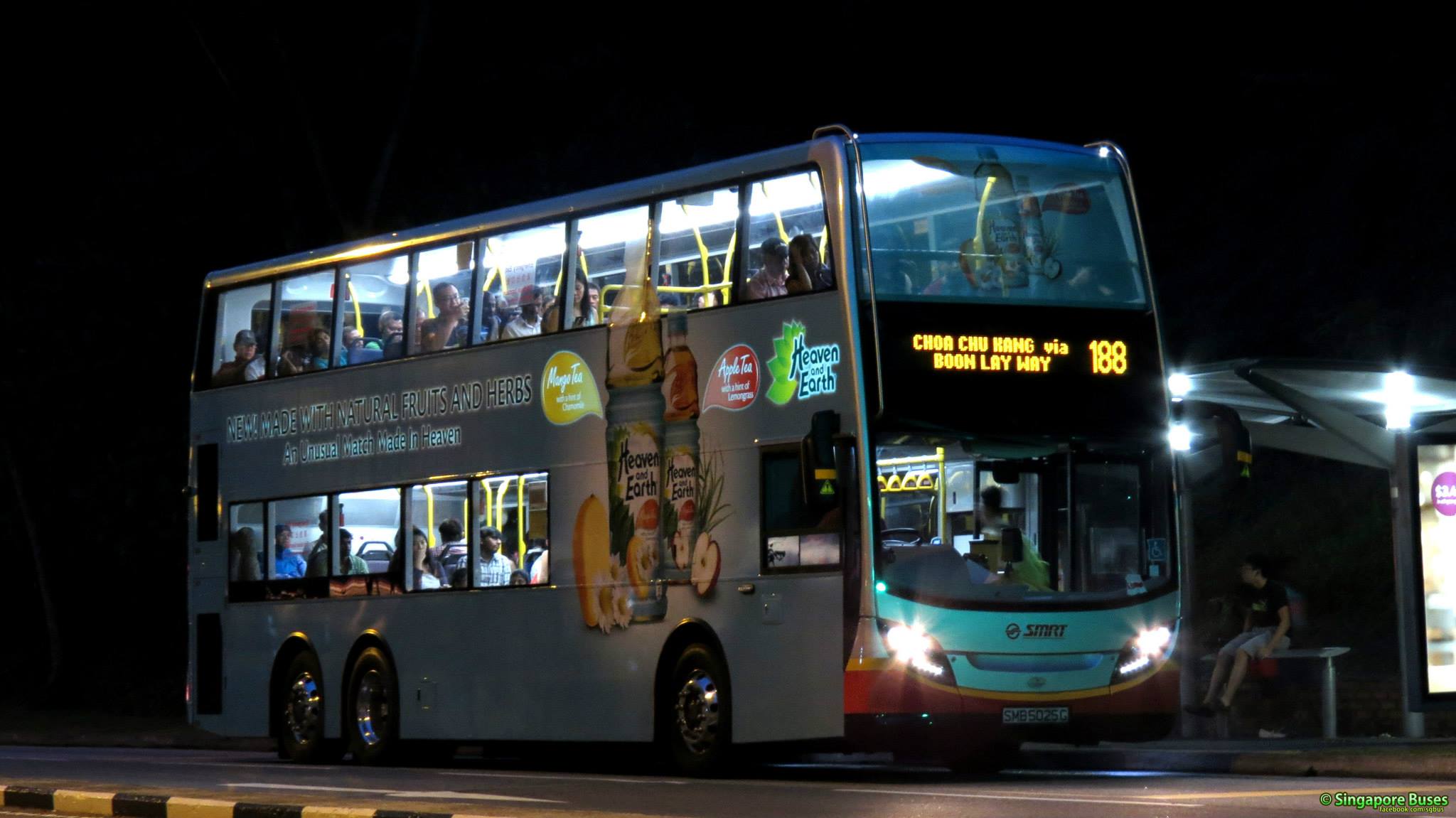 When his parents realised this, they became frantic.

Mr Lee chased after the bus on bicycle, while Mrs Lee drove her car.

However, when they asked the bus captain, he said Junle was “talking to himself” and got off at the polyclinic.

Mr Lee took a “very slow” taxi to the polyclinic, but couldn’t find his son at the bus stop.

He became more frantic, and called his neighbours to search the vicinity, hoping Junle had gone home.

In a comment on Mr Lee’s post, she explained that she was crossing the road when she noticed him.

The teen was looking around, mumbling,

Mummy, mummy, where is mummy?

Sensing he was distressed, she decided to follow him.

She tried to calm him down but apparently he knew how to calm himself down by holding her hands and counting backwards.

In another comment, Ms Dhiya said that Junle had also approached others for help.

However, he was also sad and had started crying and shivering.

Some distance away, Mr Lee started calling out for his son, and was heard by Ms Dhiya’s husband, Mr Aidil Ismail.

Mr Aidil’s wife must have told him about the teen, as he put 2 and 2 together and realised Mr Lee might he his father.

Couple also have autistic son, knew how to help

Are you looking for your son? My wife brought him to police station, don’t worry my son also asd, we will help you.

ASD stands for “Autism Spectrum Disorder”, a condition which both couples’ sons happen to share.

Thus, Mr Aidil and Ms Dhiya could empathise with Mr Lee’s situation, and knew exactly how to help.

Soon, Ms Dhiya brought Junle over and he was reunited with his parents. 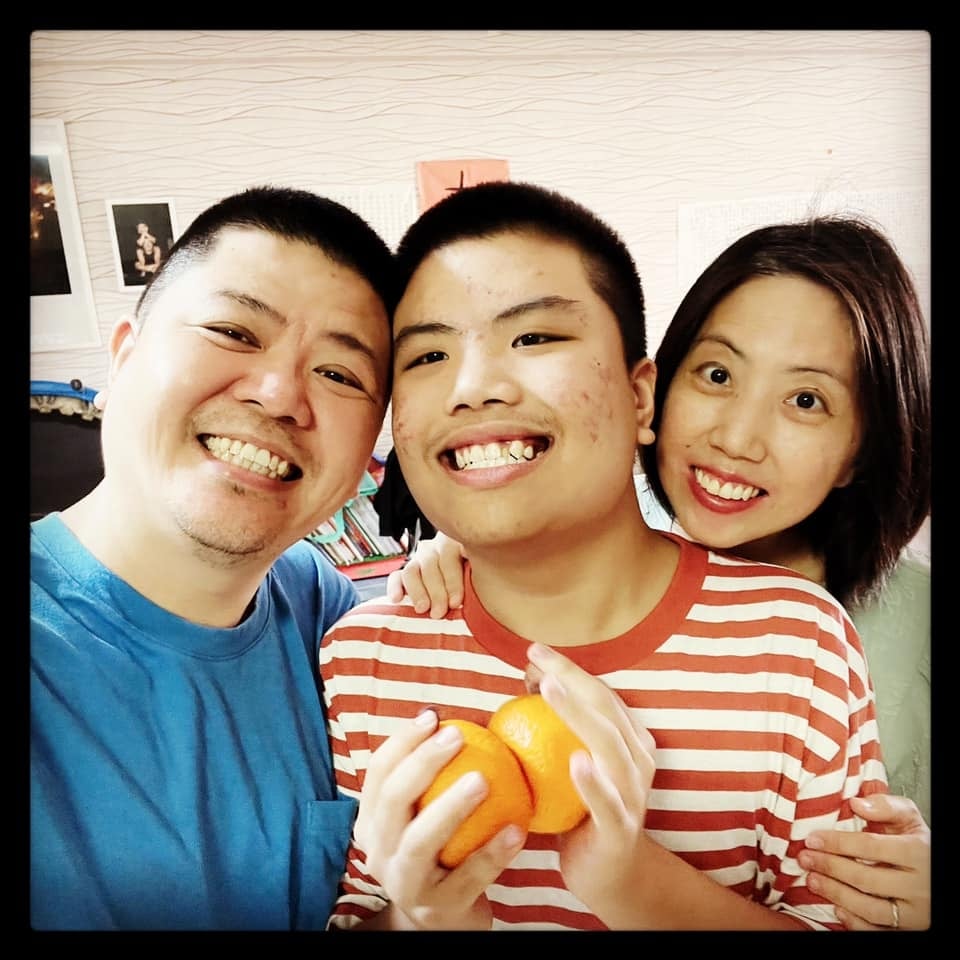 The whole incident lasted less than 30 minutes, thanks to the quick intervention of Ms Dhiya and Mr Aidil.

She also told them that the teen had asked her,

Where’s mommy? I am hungry. I want to go Jurong east MRT Station.

While Mr Lee said he was grateful that Junle had met a good samaritan, Mr Aidil was also proud of his wife.

That night, he posted on Facebook that she “did everything she could” to reunite the teen with his parents.

As they departed with their son, Mr Aidil flashed a “thumbs up” sign to the happy family – a gesture that was caught on camera by Mr Lee. 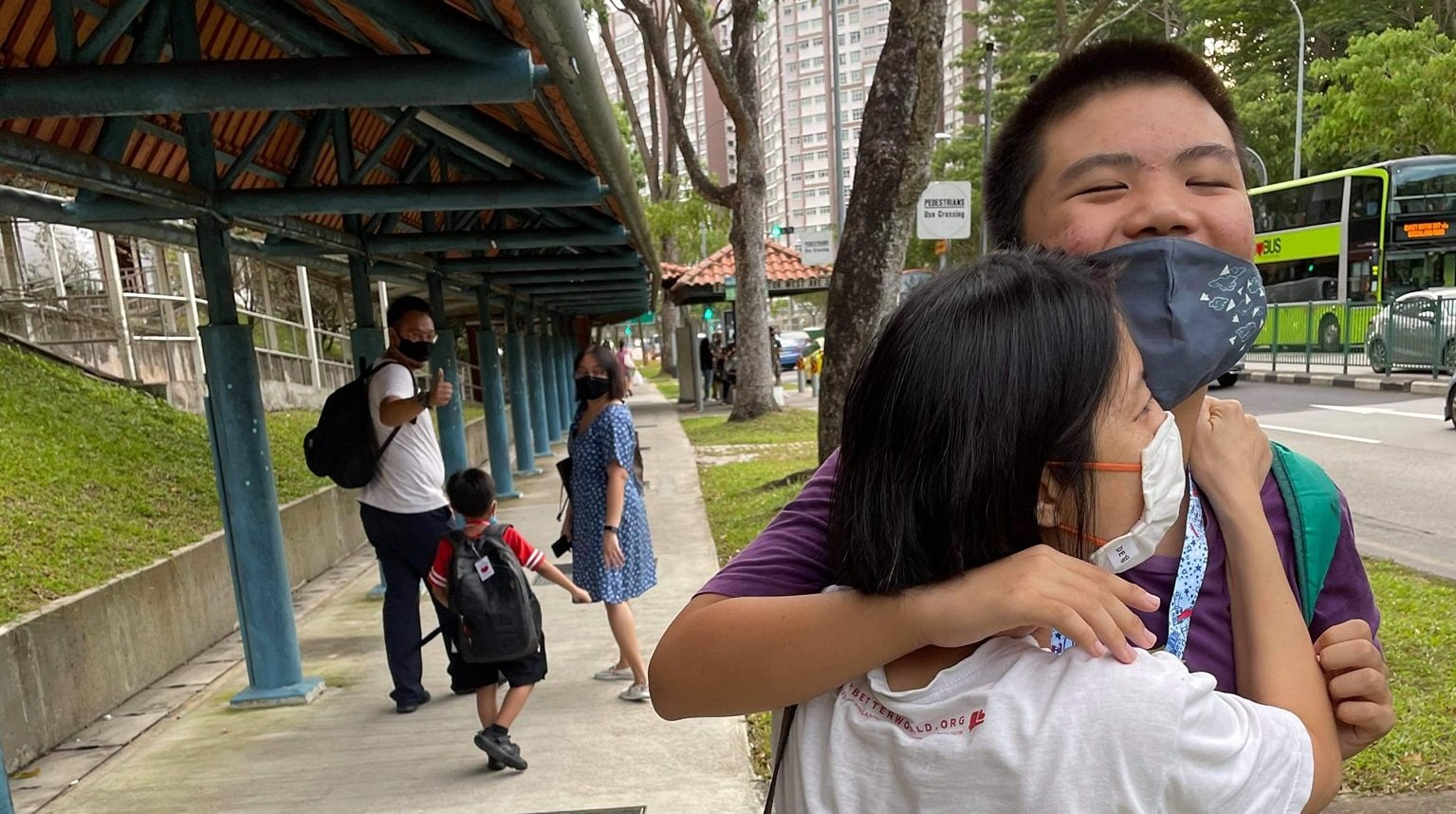 Mr Lee sent them the photo, as both families had become friends.

Not only did Mr Aidil and Ms Dhiya help the Lees out, it seems they also bonded due to their shared experience of having autistic sons.

In fact, it was such a touching moment that Mr Aidil said he was holding back his tears.

Lessons for the public

The Reunite Missing Children Facebook group, of which Mr Lee is also an admin, said they hoped the incident would be more than just a feel-good story. 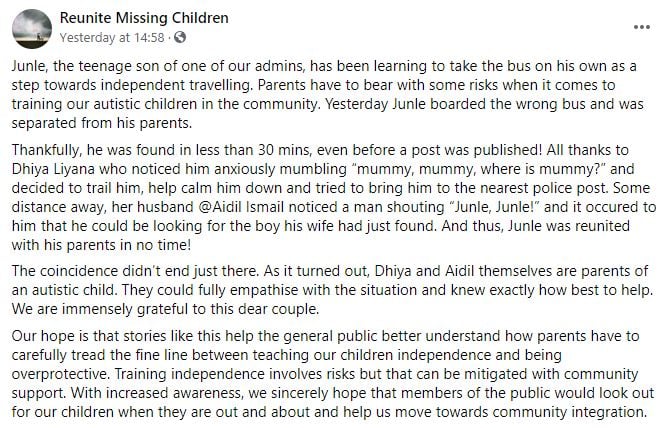 By sharing it, the public may realise what parents of autistic children have to go through in order to teach them independence in a safe way.

They urged the public will be supportive and help look out for autistic children who may need help when they’re outside.

This will help those with autism better integrate into the community.

Kudos for their empathy & kindness

When Junle was in need, it’s fortunate that he bumped into Ms Dhiya, who also had an autistic son.

As such, she instinctively knew that he was distressed, and was understanding of his behaviour.

Not everyone would’ve been so helpful to an autistic person in public, so kudos to Ms Dhiya and Mr Aidil for their empathy and kindness.

It’s always good to have friends who understand our issues, so we know the Lees will want to be friends for life.