A doctor joined the debate for million-dollar ministerial salaries, in a forum letter published by the Straits Times (ST) on Wednesday (29 Aug).

Netizens also had their say on his opinions, and you guessed it — the argument didn’t go over so well with them.

Here’s how his durian analogy, sparked a war in the ST comments’ section.

Dr Yik Keng Yeong’s letter was written in response to an ST article about high ministerial pay causing discord between Singaporeans and the Government.

He called the move to “decreas(e) the pay” of executive members of Government “simplistically expedient”.

And added that the Government has become a “convenient whipping boy” for our issues as of late.

Reducing their pay, will thus not make “more complex socio-economic and geopolitical problems” go away.

Dr Yik described the “nature of opposition politics” to “harp on divisive issues”, and that foreign nations use “Singapore as a bogeyman”.

Cautioning against falling prey to such narratives, Dr Yik stressed that he felt “paying well for talent” didn’t make the relationship “merely transactional”.

Terming it so would take away from the “patriotism, ability…artistry of our governance, and the passion, service and sacrifices” that have brought Singapore this far.

Can the opposition offer a viable alternative?

Conceding that the general public continues to hope for “transformative leaders” to inspire us, he questioned,

As many do not see this in the Government, do we see this trait in our opposition leaders?

The doctor added that although The Workers’ Party is “well received and credible”, it does not want to “form the next government”.

$10/year to pay our Cabinet

Crunching the numbers, Dr Yik calculated that since Singaporeans pay $50-60 million tax per year, that comes up to “$10 per resident a year to pay our Cabinet”.

He further put it into perspective using a durian analogy,

To put this into perspective, one premier-grade durian, eaten within minutes, costs more than $50. So, is this a pittance or an extravagance?

Low pay for leaders, but at what cost?

Dr Yik concludes by saying that “emotive issues”, like the case of ministerial pay, cannot be settled by “rational arguments”.

He thinks that with “low-paid leaders”, we may risk an “untried government” that could chalk up national debts through “populist polices or sheer inefficiency”.

Netizens didn’t take Dr Yik’s analysis too well, and kickstarted a debate in the comments section.

Some asked him not to “insult durians” as they brought pleasure to common folk.

Others pointed out that it seemed illogical to quantify a minister’s pay with the number of citizens served in the nation.

This would mean that China’s president Xi Jinping should receive S$1.3 billion, as per their population — if citizens paid only $1 per year.

Netizens also pointed out that they were not satisfied with the “standard” and “quality” of the ministers, with some asking for a refund.

Finally, questions were raised about whether Dr Yik felt the current cabinet wasn’t paid enough, or if the calibre of the current ministers was “worth a durian to each of us”.

Some fact-checking is in order, however.

Using this year’s prices as a comparison point, premium durians did not cost $50 due to a bountiful harvest.

With $50 per person, you could have gotten 3-4kg of Mao Shan Wang durians at $15/kg. We’re not sure how many Singaporeans could single-handedly finish that amount “within minutes”.

Finally, we’ll leave you with this discerning netizen’s take on the matter. 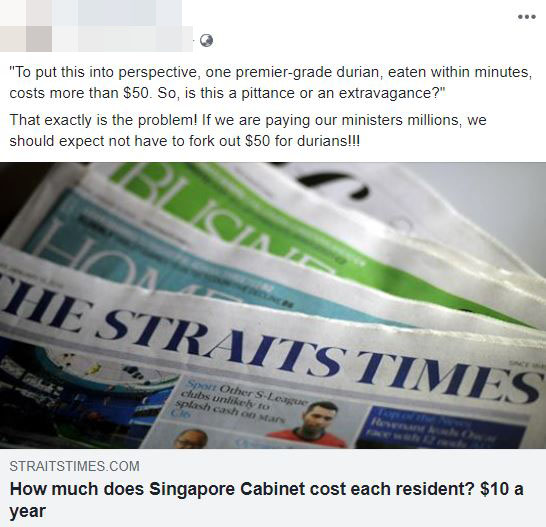 If we are paying our ministers millions, we really shouldn’t have to pay $50 for durians at all.

Featured image from Gov.sg and The Straits Times on Facebook.

Green Comet To Pass Earth For 1st Time In 50,000 Years, Will Be Visible From S’pore