Rescued Dog Missing For Over 100 Days After Dashing Out Of Woodlands Condo, Shelter Seeks Help She ran out of her prospective owners' condo without a harness or AirTag collar.

Public Urged To Look Out For Missing Dog Mercy, Last Seen In Woodlands

Missing pets are always an upsetting and alarming experience for owners, especially because they wouldn’t know if the furkids can find their way back home.

Unfortunately, for a shelter at The Animal Lodge along Sungei Tengah Road, their rescue dog Mercy has been missing for over 100 days.

Mercylight Animal Rescue and Sanctuary (MARS) said Mercy was last seen on 25 May. Despite the months that have passed, the shelter’s search efforts have not waned.

Now that the volunteers are growing worn out, physically and mentally, they decided it was time to seek help from kind members of the public, hoping to reunite with the canine.

Dog went missing after dashing out of Woodlands condo

Sharing their plight with MS News, a Mercylight spokesperson, Kelly, said Mercy was rescued a year ago, on 14 Jun 2021. She was described as a dog “well-loved by every volunteer” as she was gentle and easy to handle.

She was ready for adoption and had been making good progress with a couple, who bonded well with her, even bringing her home for short stays.

Convinced that it was a good match, Kelly said the shelter proceeded to begin the final phase of the adoption process — a 3-week home trial at the couple’s first-floor condominium in Woodlands.

However, it was not to be. In the last week of the trial, when the couple’s domestic helper was preparing to take Mercy on her afternoon walk, she opened the main door without ensuring that the condominium’s gate was closed.

She also did not wear the harness and AirTag collar on Mercy. So once the door and gate were open, Mercy dashed out.

The helper saw her headed toward Singapore American School and the forested area next to Seletar Expressway (SLE).

That was the last time anyone saw Mercy. Kelly said the shelter’s volunteers had conducted multiple searches in the forests, parks, HDB estates, and condominiums throughout Woodlands, Admiralty, and Marsiling.

“We only spotted her once in the forest next to the expressway, but she ran off once she saw us,” she said, adding that Mercy was a dog who would stay away from crowds.

Before her rescue, Kelly noted that Mercy used to stay in the bushes. Hence, she was not a dog who would approach strangers if they called or offered food.

Volunteers also printed 400 posters and pasted them at conspicuous places. But unfortunately, they had to remove the posters a week later due to complaints. 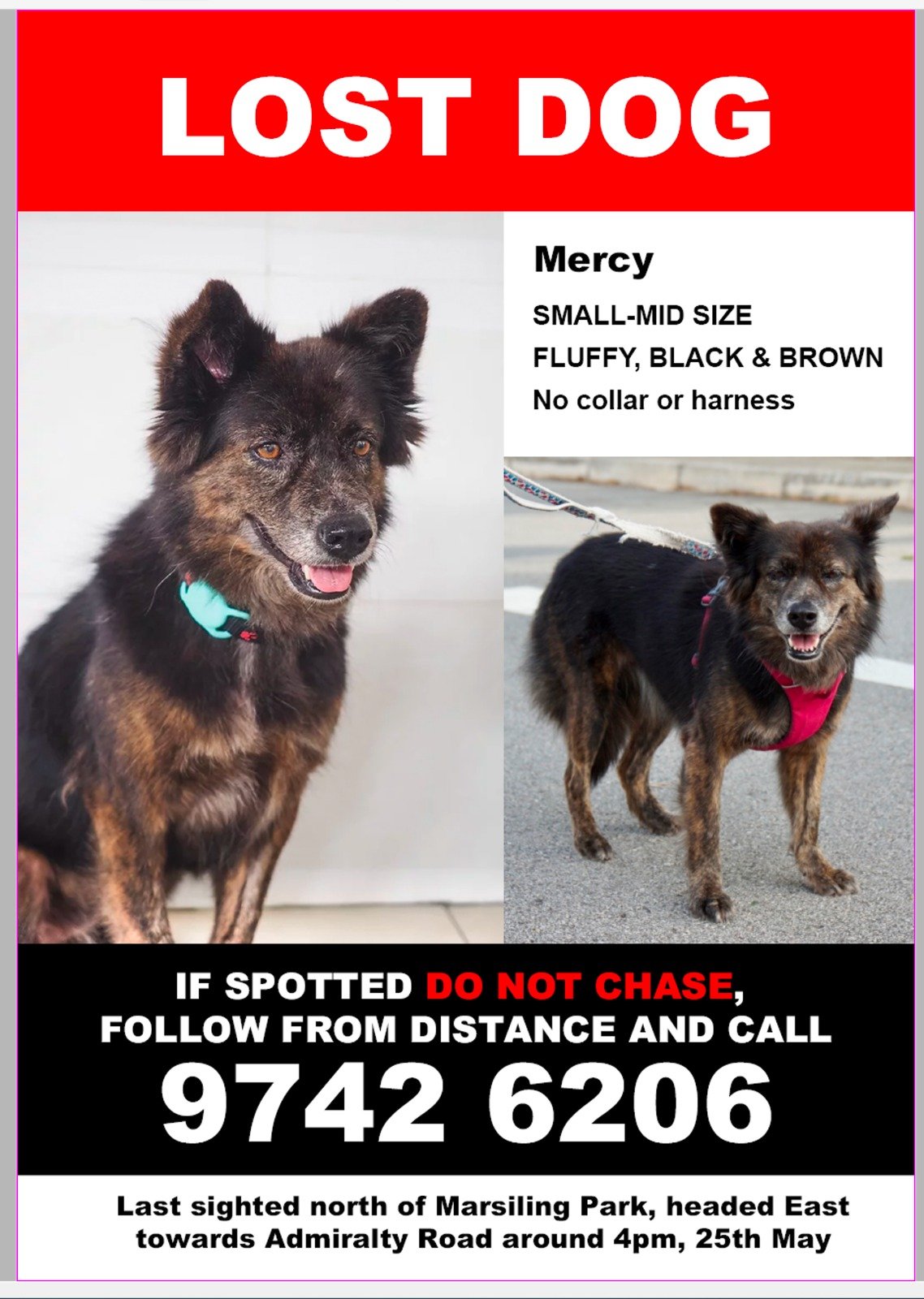 Because of the park connectors, Kelly believes Mercy may be anywhere in Singapore.

Long journey before Mercy was rescued

According to Kelly, Mercy was 6 years old when Mercylight took her in. She had a sad life as she had two missed opportunities of being rehomed. 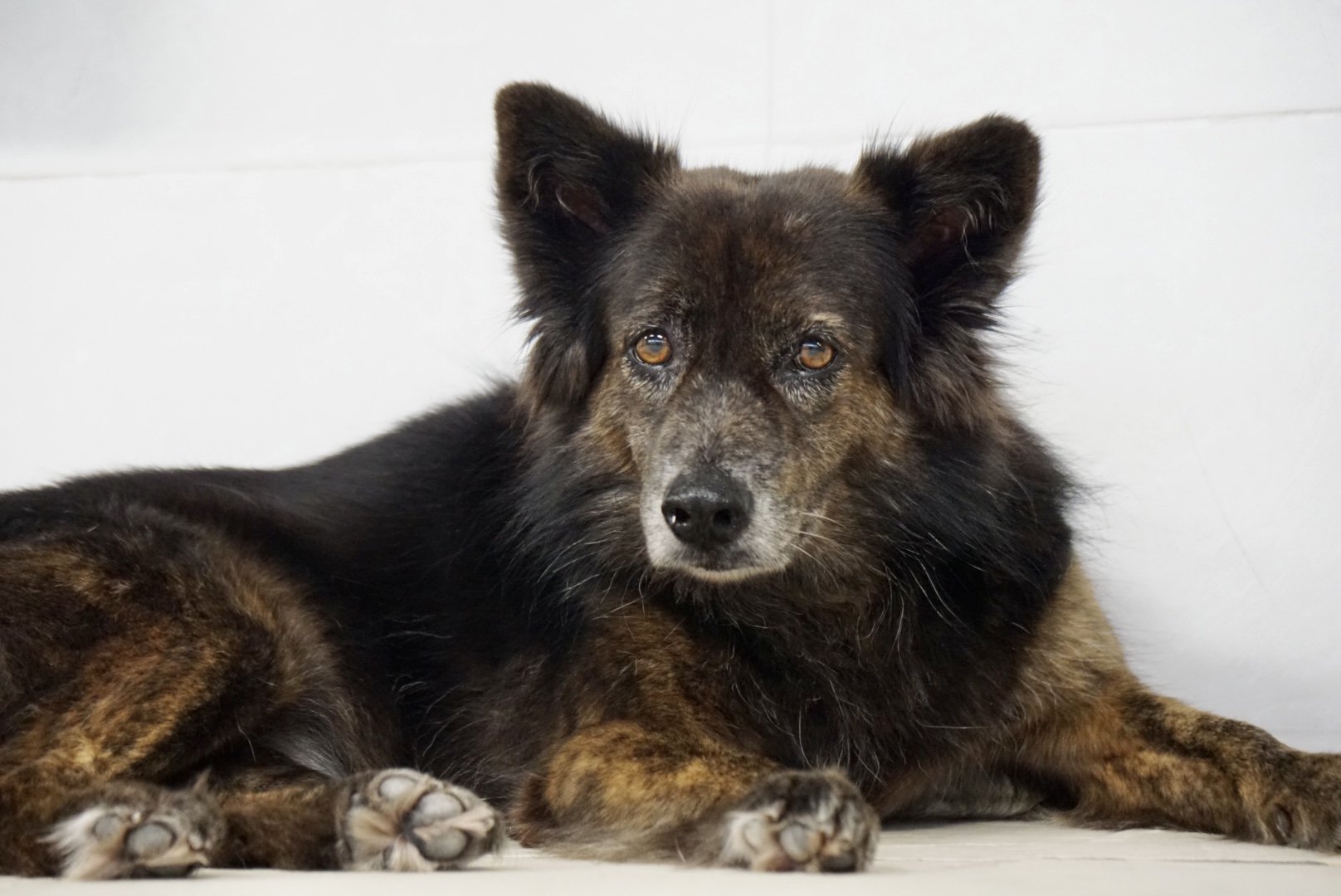 “When she was two, Mercy was trapped by another dog shelter group to be sterilised. But she was not ‘chosen’ to be rehomed. Instead, after operating on her, they let her go,” said Kelly.

Mercy was released at the location where she was originally captured, and survived as a wild dog hiding in tall bushes along Lorong Pasu.

In late May 2021, Kelly said a regular feeder noticed her lethargy and lack of appetite, so they approached another shelter for assistance last year.

While the organisation agreed to treat her, they had no intention of rehoming her.

The feeder then approached Mercylight, who welcomed Mercy warmly. “It’s puzzling why nobody wanted to rehome or rescue Mercy permanently. She is such an easy dog to rehabilitate compared to average street dogs,” Kelly related.

Hope Mercy will be found soon

After months of fruitless searches, Mercylight is urging members of the public to help them.

Those with information about Mercy can call the number on the poster above or contact Mercylight via Facebook direct message here.