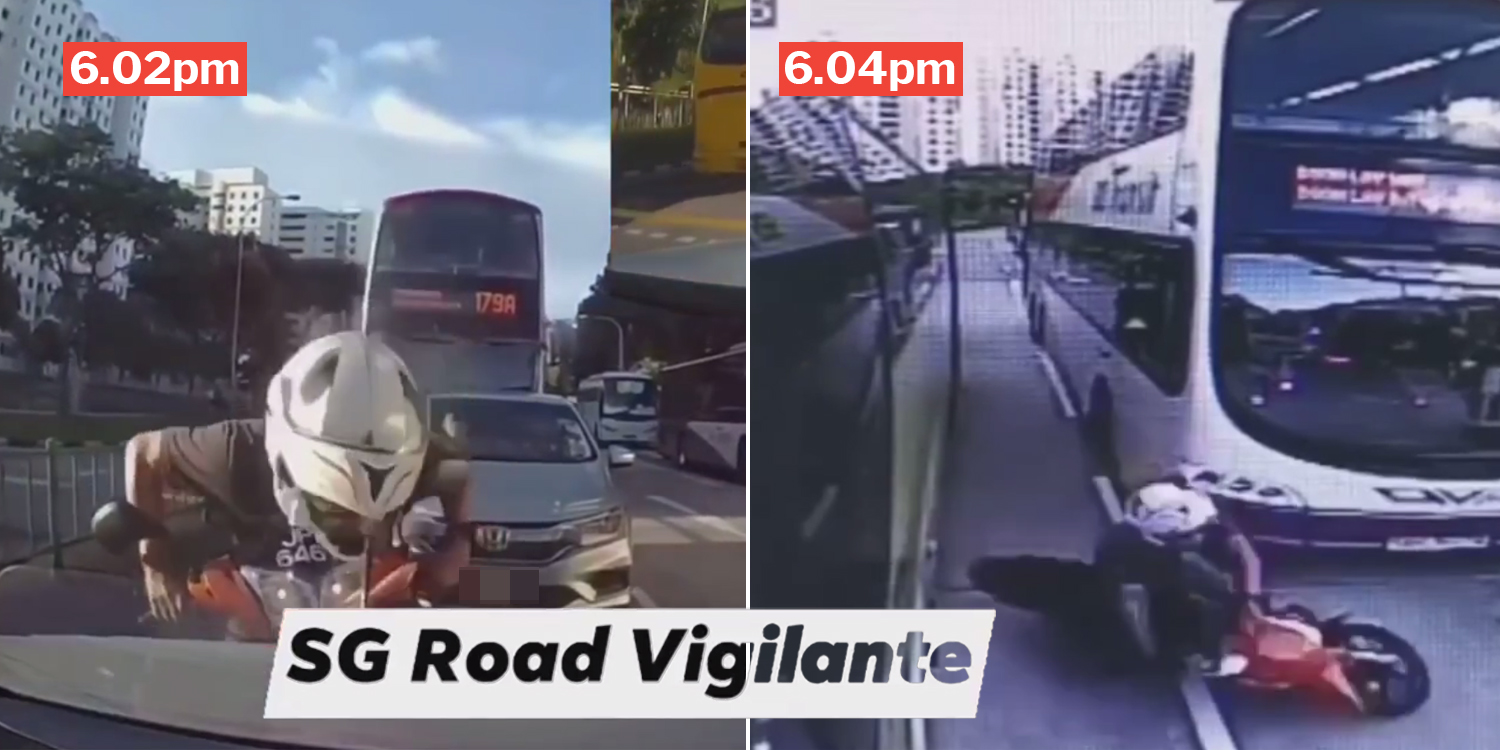 Motorcyclist Crashes Into Car & Buses During 2 Accidents In Jurong East

Accidents happen on the road nearly every day. But it’s not often that you hear of someone getting into accidents one after another within a span of mere minutes.

Yet on Tuesday (1 Dec), a motorcyclist was involved in 2 separate traffic accidents within a span of just 2 minutes.

Footage of the Jurong East accident was shared on the SG Road Vigilante Facebook group and YouTube channel on Thursday (3 Dec).

The motorcyclist allegedly reeked of alcohol, claimed one of the drivers whose car was hit.

In the case of the first accident – which took place on Jurong East Street 63 – the motorcyclist can be seen emerging from behind a Honda on the left-most lane.

As he inched forward towards the dashcam car, the rider looks down for some unknown reason.

Perhaps not aware of what was ahead of him, the motorcyclist crashed squarely into the boot of the car.

The driver immediately got out of his car and went to the rear to snap some pictures.

At one point, the motorcyclist reportedly attempted to “wipe” the boot using his hand but was told by the driver that there was no need.

Upon hearing that, the rider swiftly got on his bike and rode away, even before the driver could exchange contact details.

Speaking to Lianhe Zaobao, the driver claims that the motorcyclist reeked of alcohol at the time of the accident.

Knocks into a bus and falls just 2 minutes later

Just 2 minutes after the first collision, the motorcyclist found himself in yet another accident on the adjacent Jurong West Street 64.

This time, the motorcyclist attempted to weave between 2 buses, only to lose control and fall right in front of the SBS bus.

Drivers of both buses immediately got out to render help, but the rider merely rode off without saying a word.

Naturally, the bus drivers were in disbelief as they checked their vehicles for damages.

In response to Lianhe Zaobao’s queries, the police confirmed that they’ve been alerted to the first incident.

Nobody was hurt as a result of the accident, and investigations are currently ongoing.

Simply driving away after a traffic accident is unethical

Though investigations are still underway to determine what had actually happened, motorists should not simply leave the scene if an accident had indeed occurred.

Instead, motorists should exchange contacts and ensure that there’s an agreement on how the damages are to be settled.

In any case, we hope the damages are minor and that the rider wasn’t injured from the accident.