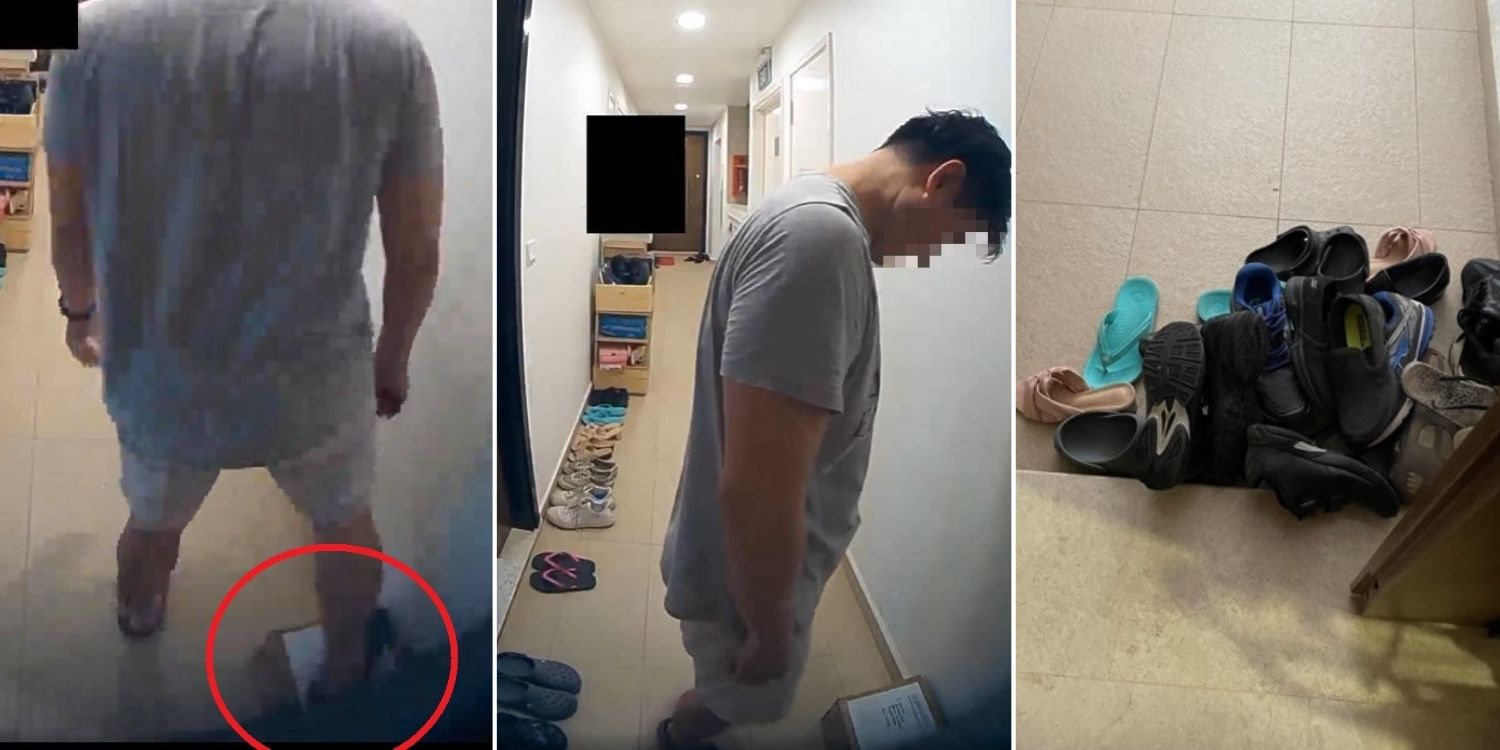 Her condo management didn't do much, she said.

In a country like Singapore where most of us live in high-density blocks, having good neighbours is important.

However, all too often we hear stories of neighbours from hell who make others’ home lives unbearable.

A Singapore condo resident recently shared about about her next-door neighbour over social media, complaining of a series of inconsiderate acts.

She caught 1 of them on CCTV – the footage shows him stepping on her parcel, seemingly on purpose. 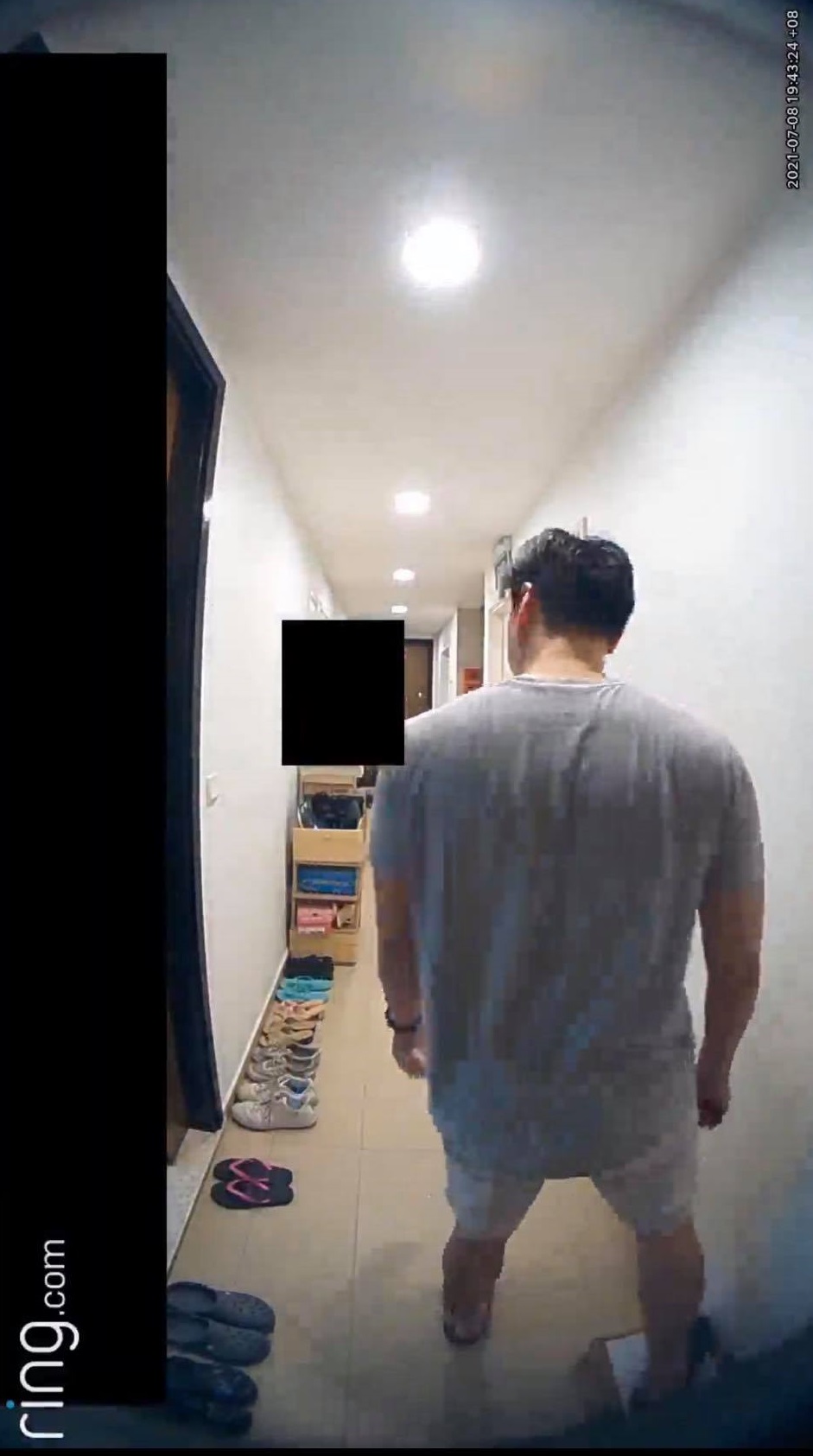 She’s reported him to the management and to the Singapore Civil Defence Force (SCDF), accusing him of other inconsiderate acts.

But she’s refrained from reporting him to the police for now.

On Friday (9 Jul), a netizen who goes by the name of Leiralala Hime shared a CCTV video with the Complaint Singapore Facebook group.

Captioned “why do such people exist?”, the video was taken from the front door of her Upper Serangoon condo unit.

It showed a man emerging from the door of the unit on her left.

He catches sight of a parcel on the floor, which was left for her. 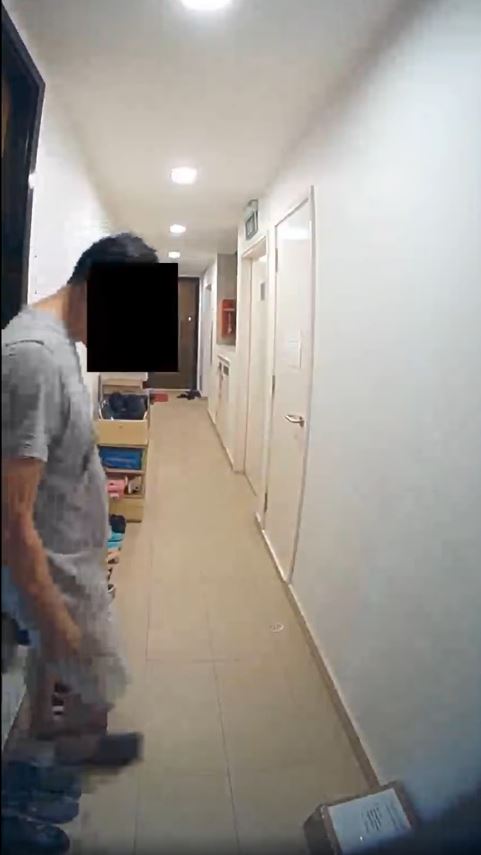 He then does something strange – he proceeds to immediately put his right foot directly on top of the parcel.

He then walks to the end of the corridor and seems to press a lift button.

Just when you’d think he’s taking the lift down, he walks back to the parcel and takes a look at it. 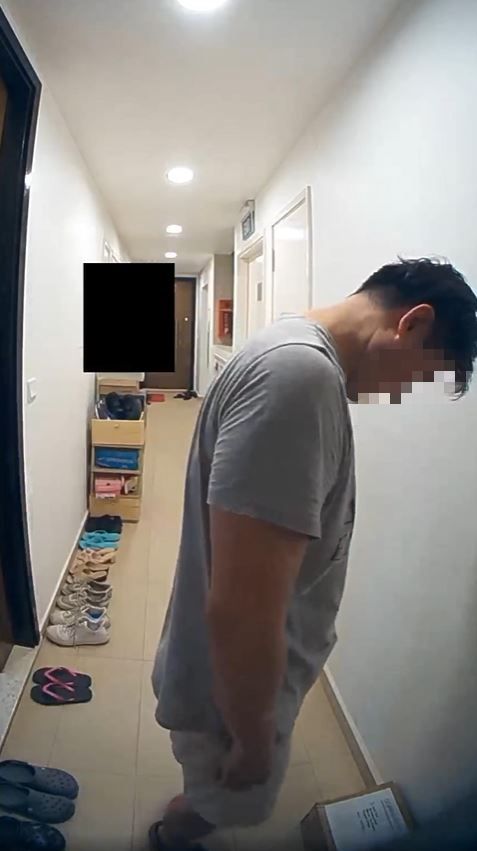 He then goes back into his unit, saying something unintelligible as we hear noise from the lift apparently approaching the floor.

According to the time stamp on the video, it was recorded on Friday (8 Jul) evening.

Why step on her parcel?

Now, why would Ms Hime’s neighbour step on her parcel out of the blue?

In an update on Sunday (11 Jul), she told MS News that her neighbours actually called the police.

They told them that the man stepped on the parcel because he wanted to test out her CCTV, she alleged.

But why did Ms Hime install CCTV on the front door in the 1st place?

It’s because according to her, they’ve committed previous inconsiderate acts. She’s  even confronted him about them before.

She listed some of them down for MS News:

1. Shoes outside her door

According to Ms Hime, her neighbours have been leaving their shoes right outside her front door.

She’s opened her door to find a sight like this: 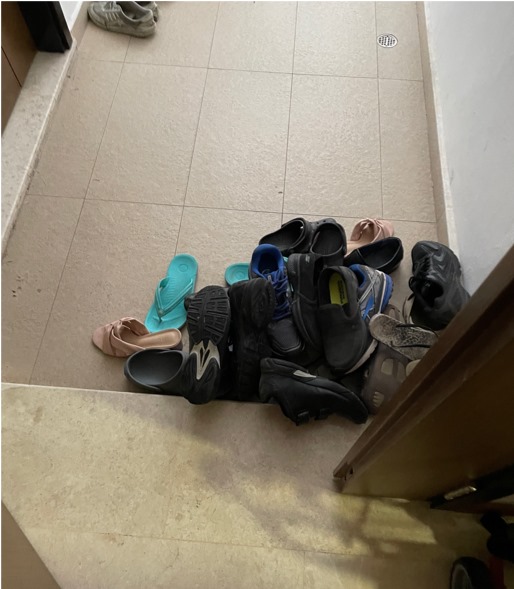 In other photos she provided, she said all the shoes pictured are her neighbour’s, except for the pink slippers which are hers. 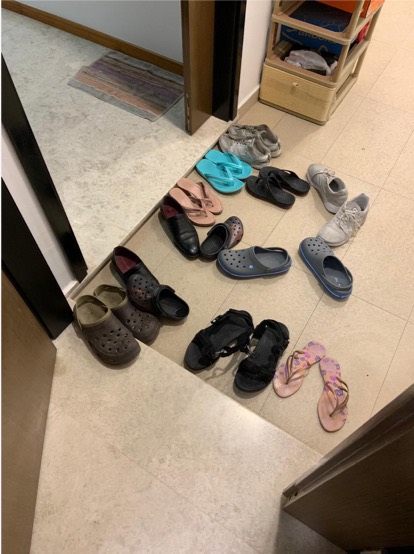 “I honestly don’t think it’s wrong for us to tell them to move it away,” she told MS News, as they’re literally right in front of her door.

Neighbour allegedly brushed her off when confronted

However, when she asked the neighbour not to put their shoes so close to their house, he allegedly brushed her off.

According to Ms Hime, he said there was “something wrong” with them.

He also said as the space is right outside their house, he can put the shoes anywhere he wants, she added. 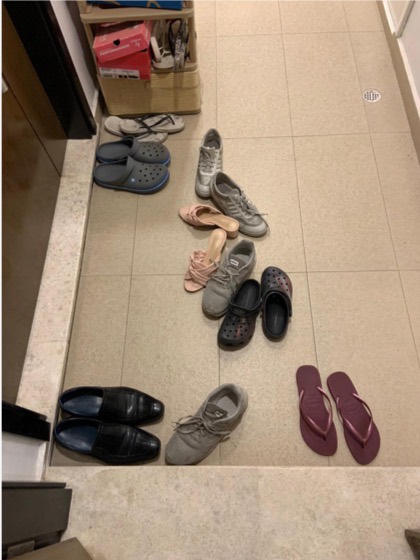 But, Ms Hime reasoned, the space is tight, so it’s right in front of her house too.

Because of them, she said, she no longer puts anything outside her unit.

Management allegedly didn’t do much

After having to push their shoes aside, Ms Hime said they couldn’t take it any more.

So this year, she complained to the condo’s management.

However, they “didn’t do much”, she added.

2. They allegedly threw her signboard away

Worse still, Ms Hime said her neighbour also threw away a signboard of hers that she installed for her cat. 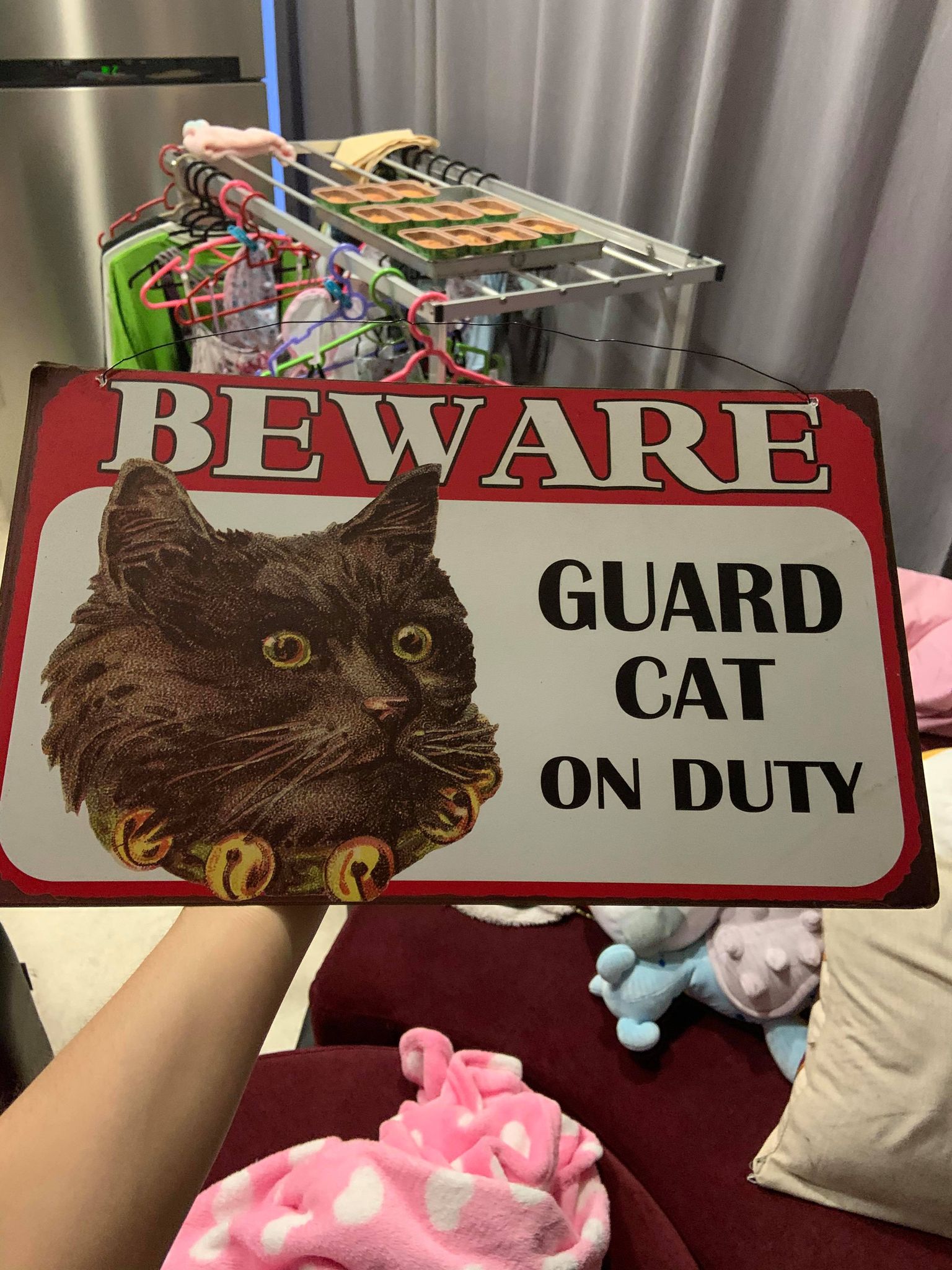 During the ‘Circuit Breaker’ last year, she realised that the signboard, which she put up on her front door, had been ripped off. 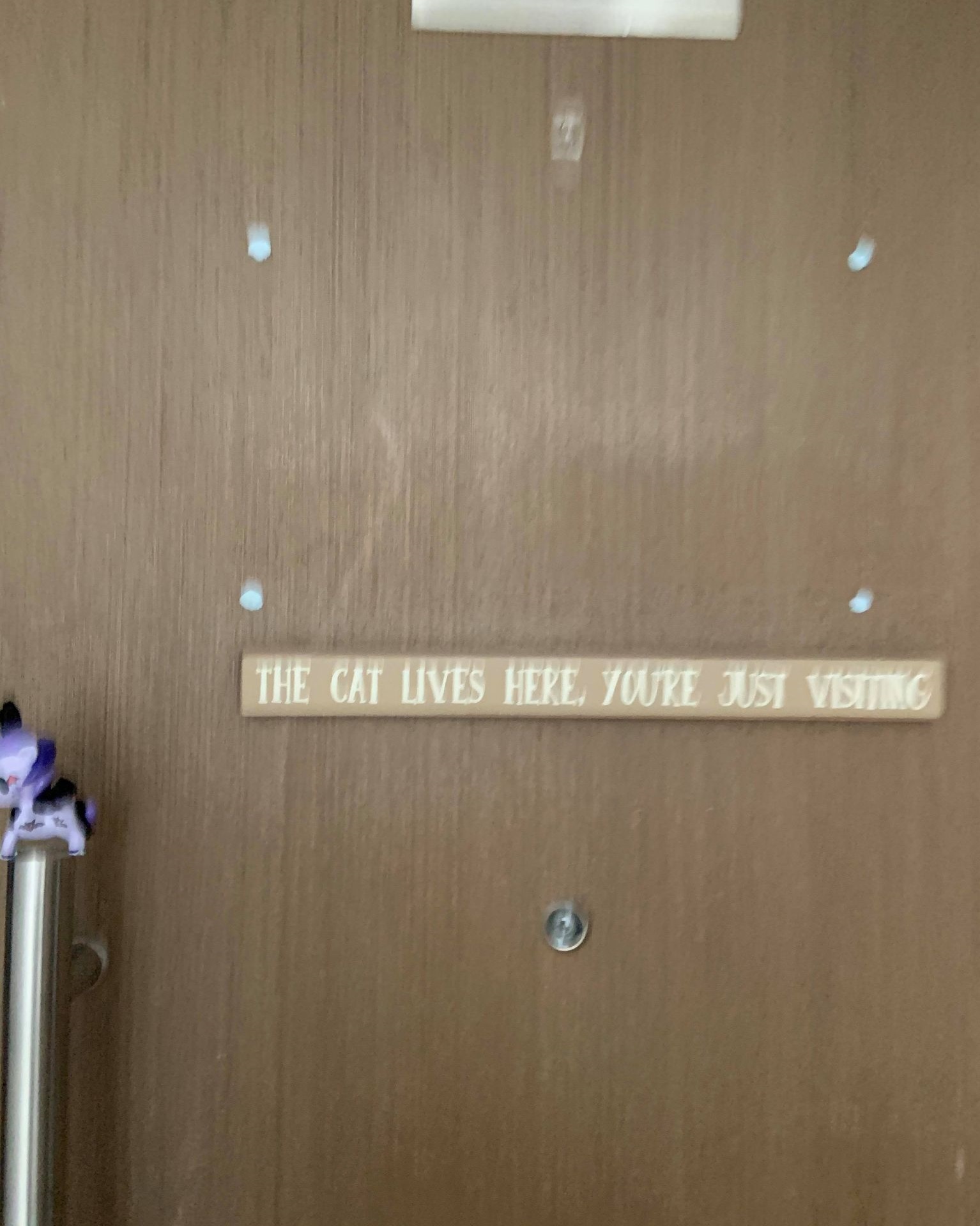 She found it in the common rubbish chute, she said, and it was really a shock to her as they “did not do anything”.

Ms Hime said she confronted the man after that, and he replied that there’s no video footage of him doing it – so she can’t accuse him of anything.

That’s why she decided to install CCTV on her front door.

3. They allegedly left their stuff in the fire hose reel

Ms Hime also said her neighbours do something that’s a safety risk – they allegedly leave their stuff in the dry riser cabinet. 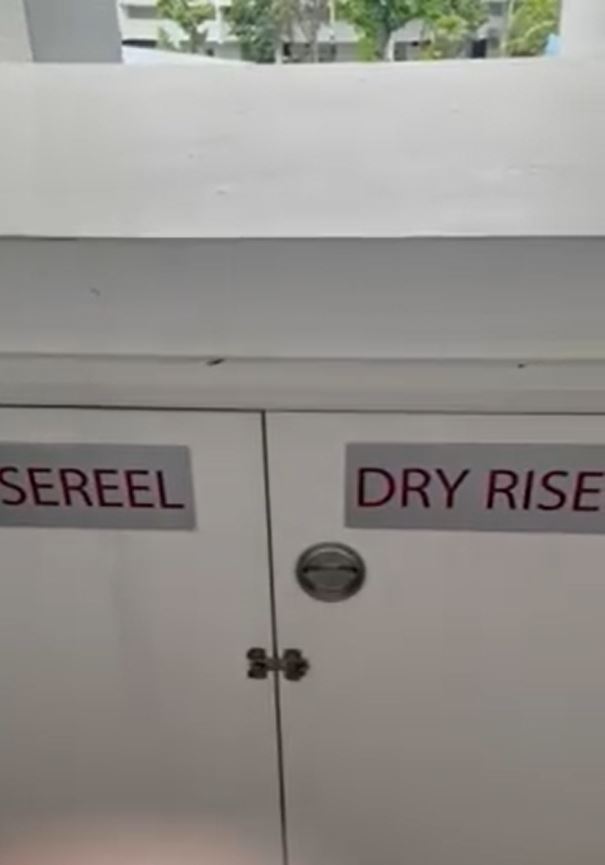 In fact, they treat it like their personal storeroom, she added, and refused to move their things away. 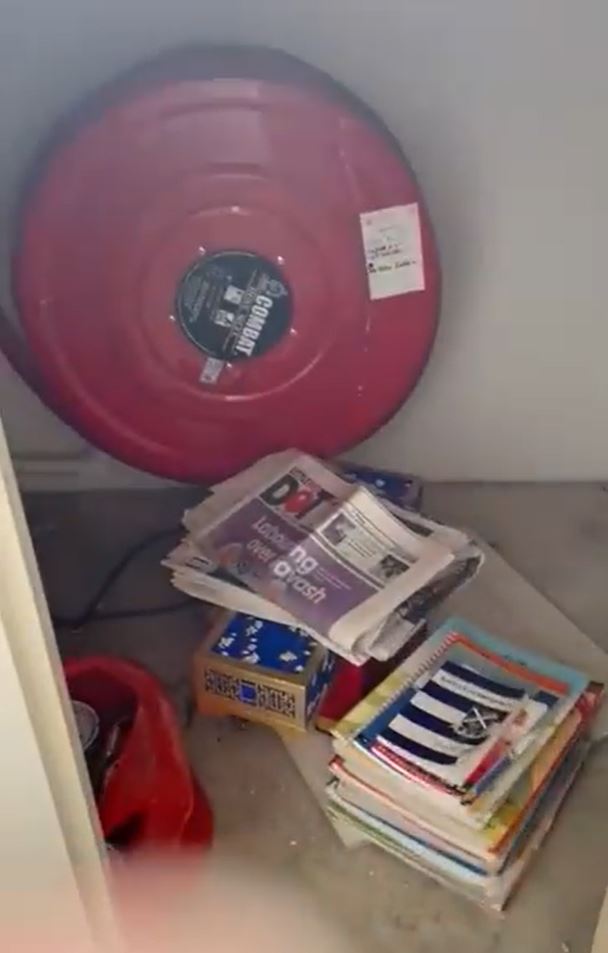 The dry riser cabinet is also where the fire hose reel is kept, and most Singaporeans would know that firefighters will need to access it when there’s a fire.

Blocking access to the fire hose reel creates a safety hazard as it hinders firefighters from putting out a fire quickly. This could cause lives to be lost.

Since her neighbour’s alleged actions posed a safety hazard, she reported them to the Singapore Civil Defence Force (SCDF), Ms Hime said.

The SCDF responded by clearing all the things away.

However, she doesn’t know whether SCDF talked to her neighbours or imposed any penalties on them.

She also alleged that the neighbour’s kid left torn-up books on the common table next to the pool. 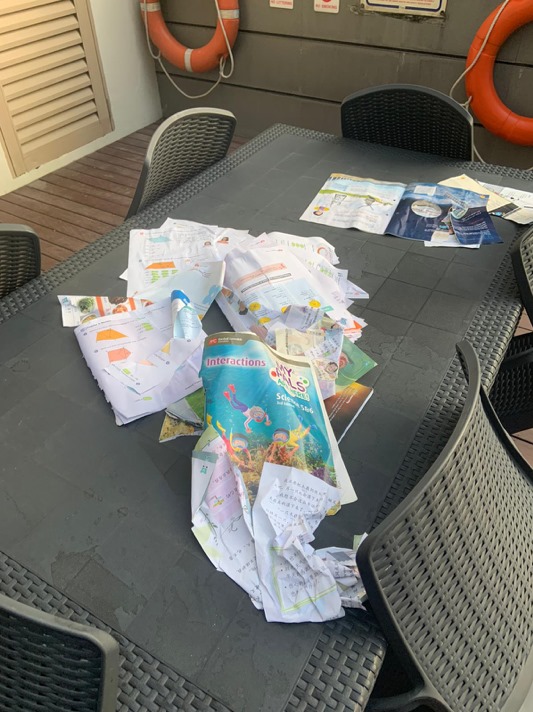 Ms Hime also suggested that her neighbour wasn’t happy that she confronted him over the shoes, so he allegedly stepped on her parcel.

She’s been “very nice and tolerant already” by not reporting him to the police, she said – though by sharing about him with the Internet, it’s clear she’s near the end of her rope.

When people live in close quarters, there’s bound to be some disagreements and friction.

However, it’s good to put yourselves in the shoes of your neighbours and be considerate so that we avoid inconveniencing them.

While something may seem small to you, or within your rights, your neighbour may not think so.

Thus it’s best to sit down and discuss a compromise rather than let things get ugly.