PIE Multi-Vehicle Accident Causes Car To Flip Over, 3 Including Baby Sent To Hospital 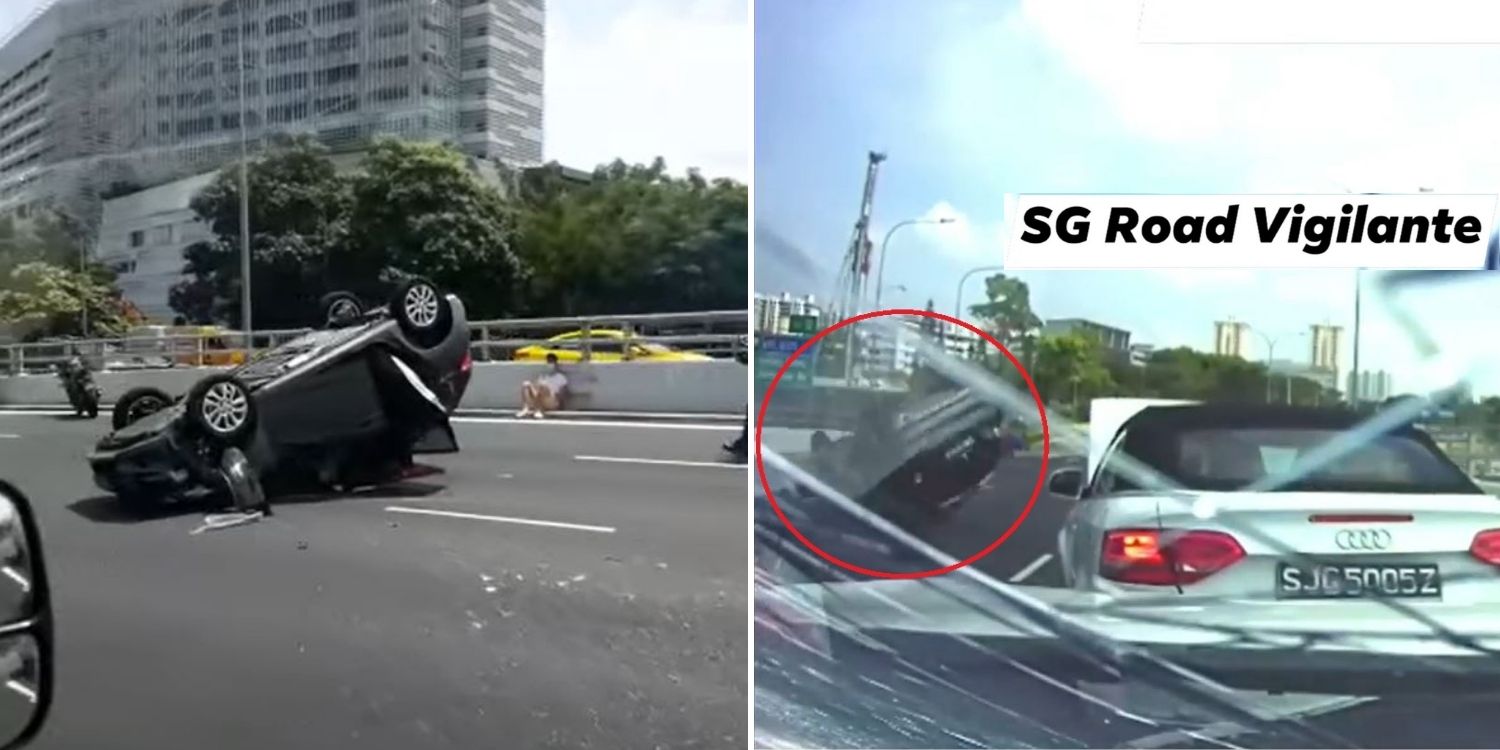 Videos from 1 of the cars involved show the moment of impact.

When a car overturns, it indicates that a traffic accident is severe, given that tremendous force must have caused it to lift off the ground.

So it proved when a Honda Jazz flipped over in a multi-vehicle accident along the Pan-Island Expressway (PIE) on Saturday (17 Jul). 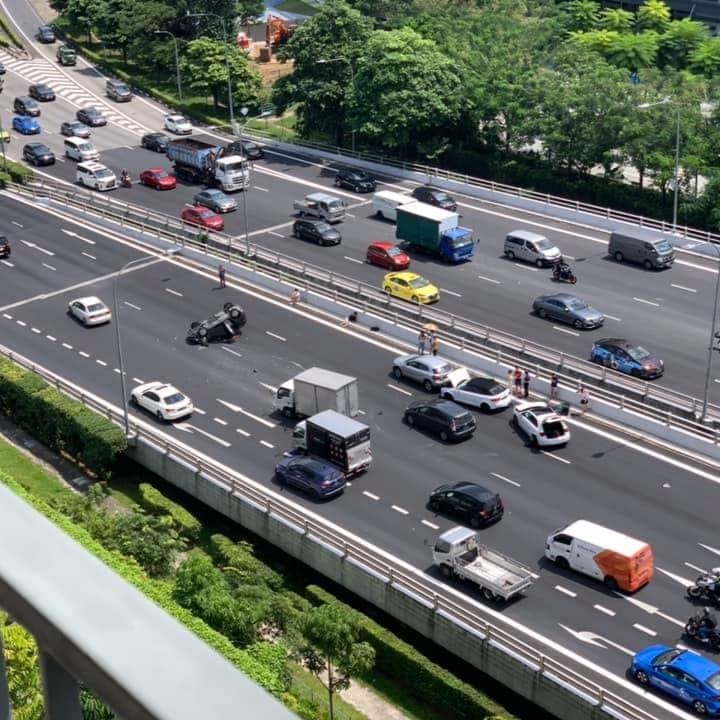 The accident was severe enough that it involved 5 cars and 1 lorry. 3 people were also taken to hospital, including a 7-month-old baby.

In a statement sent to MS News, the Singapore Civil Defence Force (SCDF) said they were alerted to the accident at about 12.50pm on Saturday (17 Jul) afternoon.

It occurred on the PIE, in the direction going towards Tuas.

The crash was just before the exit to Bendemeer Road. At 12.52pm, the Land Transport Authority (LTA) also tweeted about an accident on the PIE towards Tuas, before the Kallang–Paya Lebar Expressway (KPE) exit.

A video by SG Road Vigilante, taken from 1 of the cars involved, shows the moment of impact.

It starts with the car with the camera driving along the PIE, with quite a distance between it and the Audi in front. The timestamp shows 12.45pm on 17 Jul. 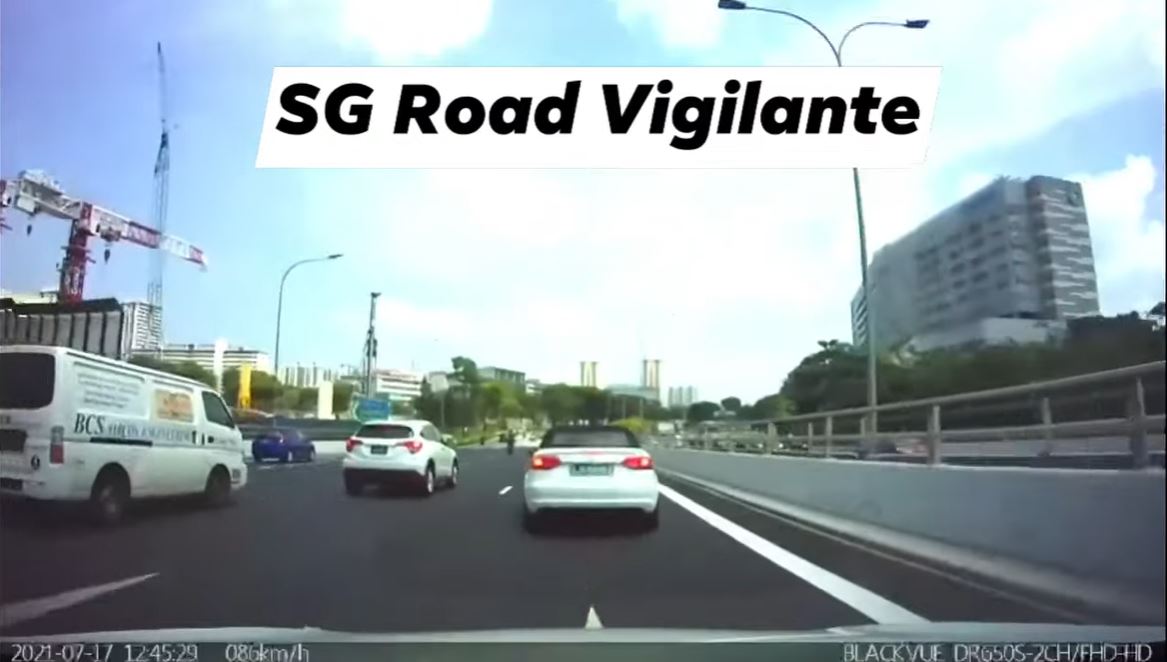 However, the Audi in front comes to a sudden stop – from the bird’s-eye view photo, we learn that it also crashed into the car in front of it.

The car with the camera can’t stop in time, and crashes into the Audi too. The impact causes its windscreen to shatter. 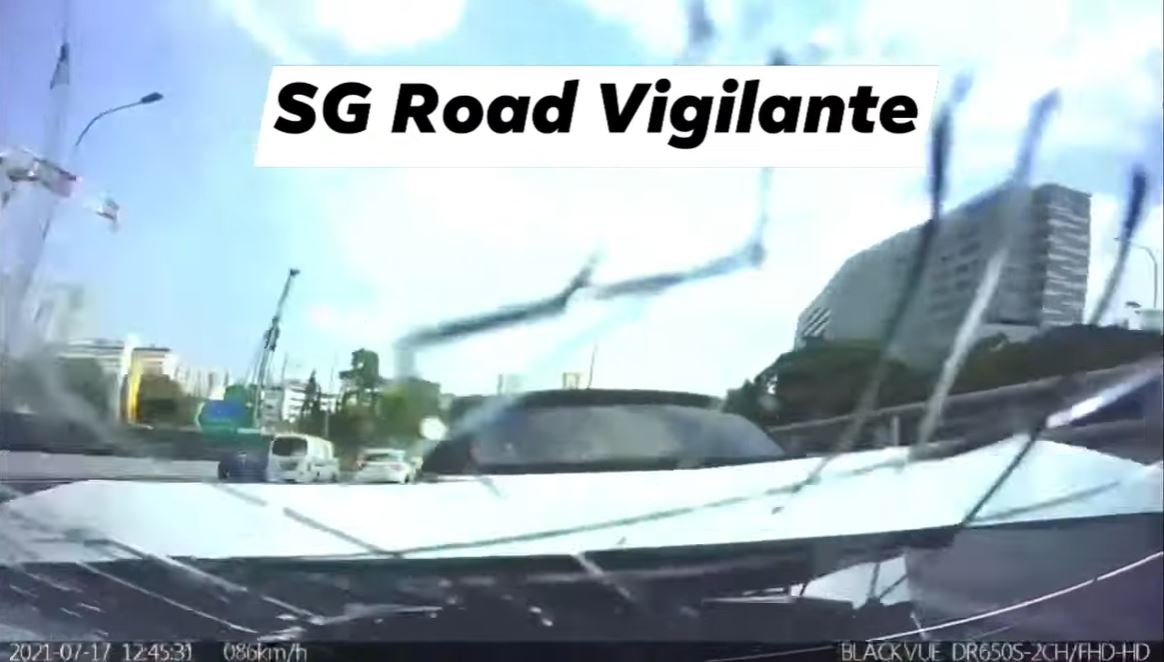 The Audi’s front bonnet also pops open, but the most alarming part is towards the left of the video.

An upside-down Honda comes into view, spinning around before coming to a stop. 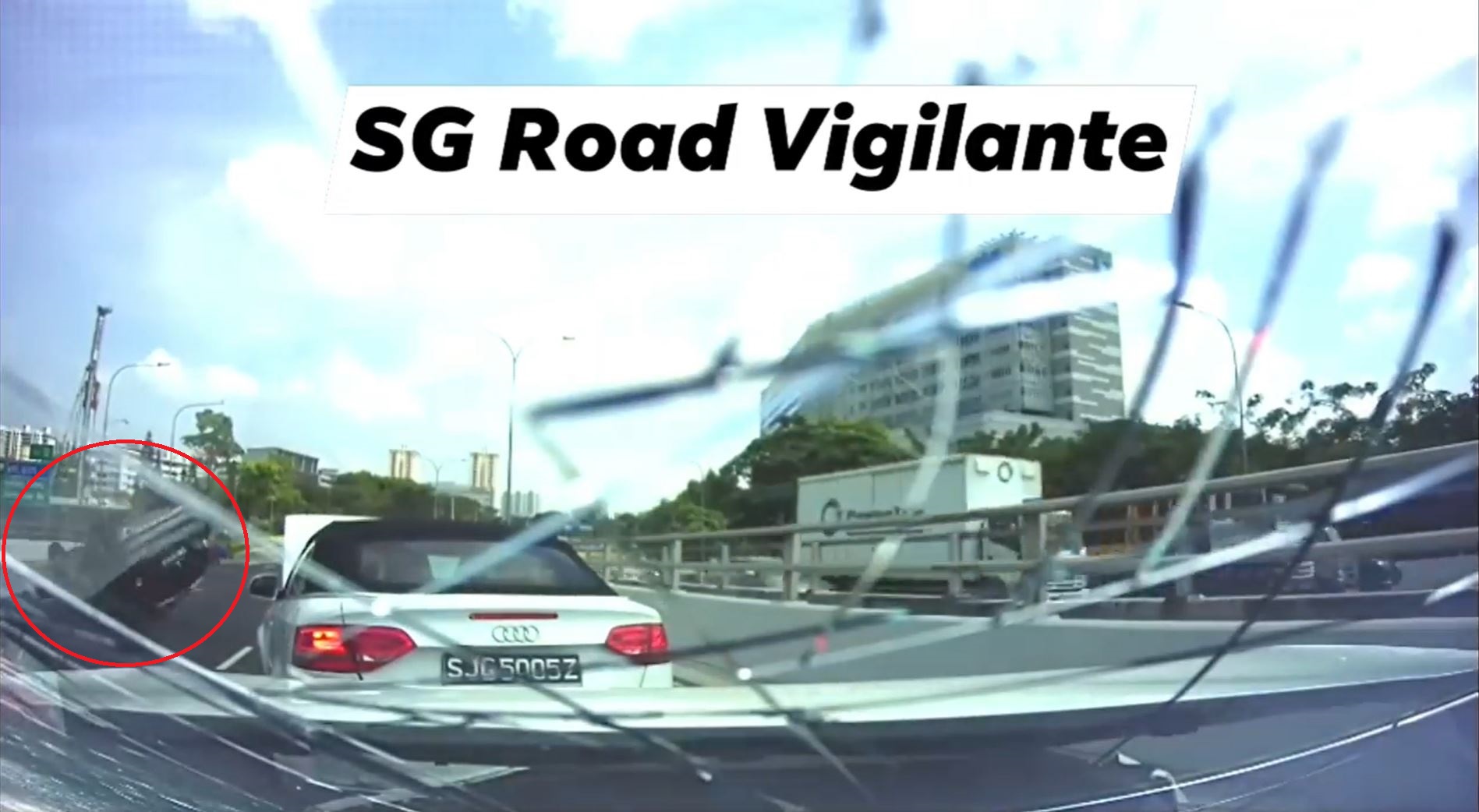 A man can be heard exclaiming “wah” at the sight, and a baby in the car also starts crying loudly.

After the Honda comes to a stop, a motorcyclist and another motorist approach, seemingly to help the driver. 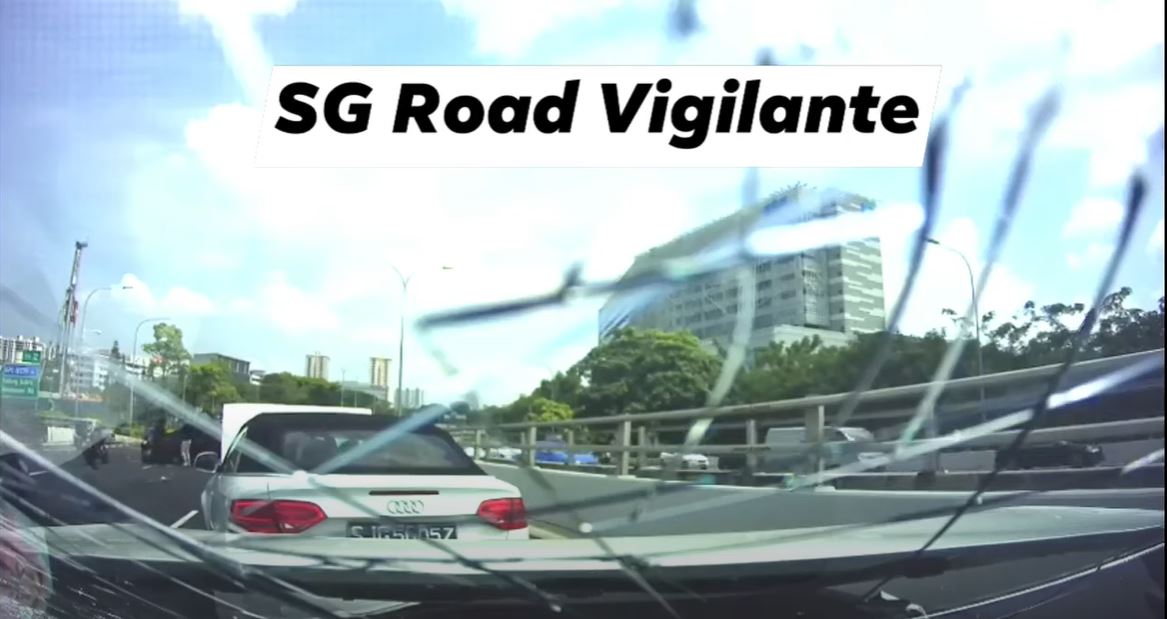 Various motorists emerge to access the situation, including a man who’s carrying a baby in his arms. 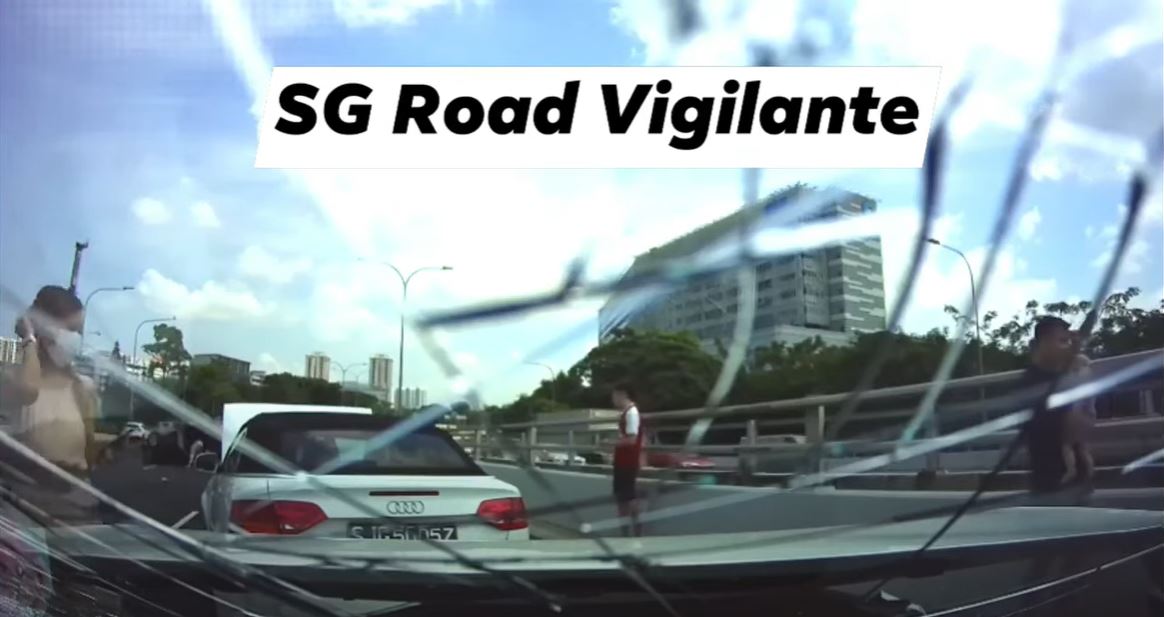 Check out the whole video here:

Another video also making the rounds of the Internet was apparently taken from the back camera of the same car.

It shows the Honda that flipped over driving behind. 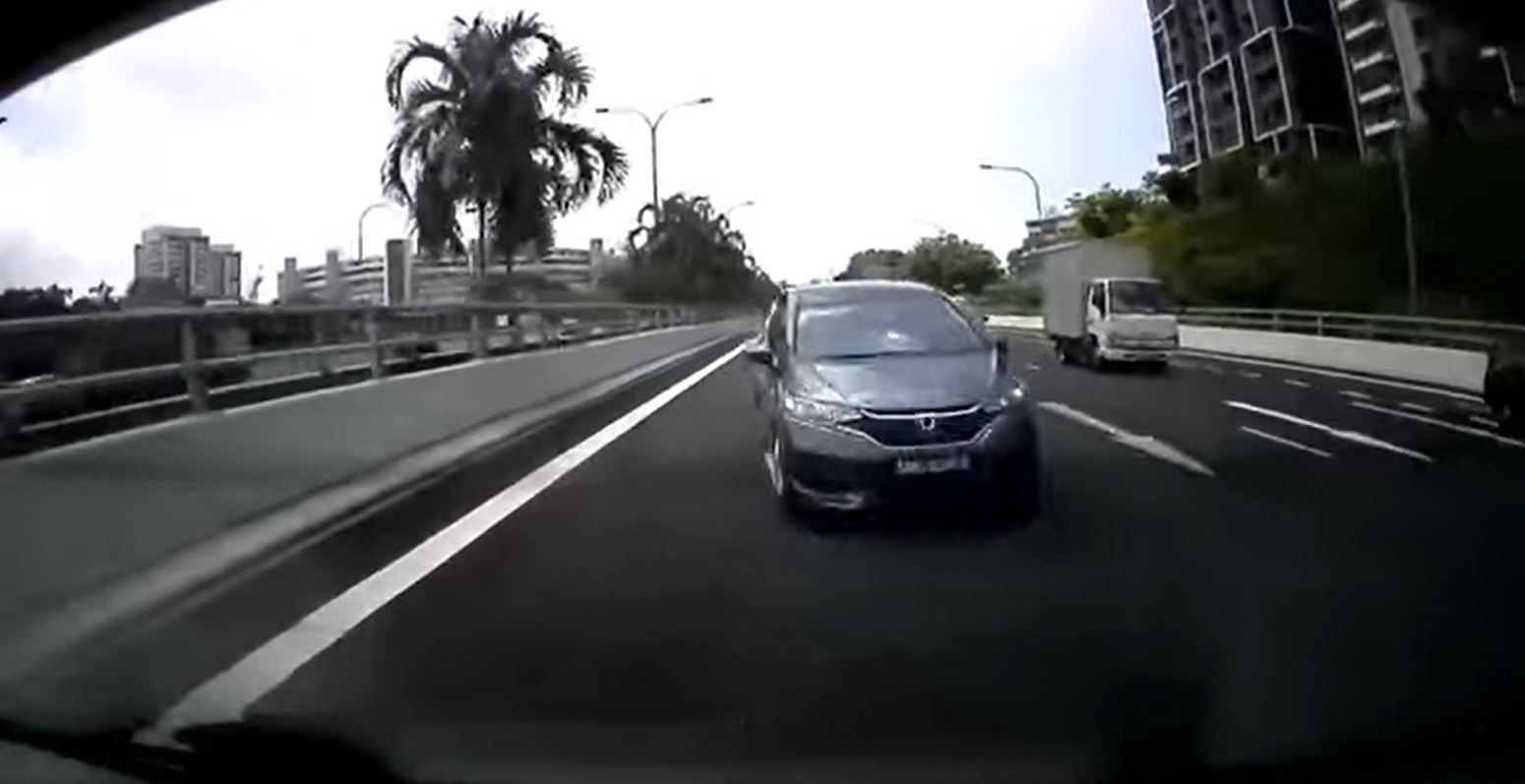 The Honda then appears to hit the car from behind, on its left. 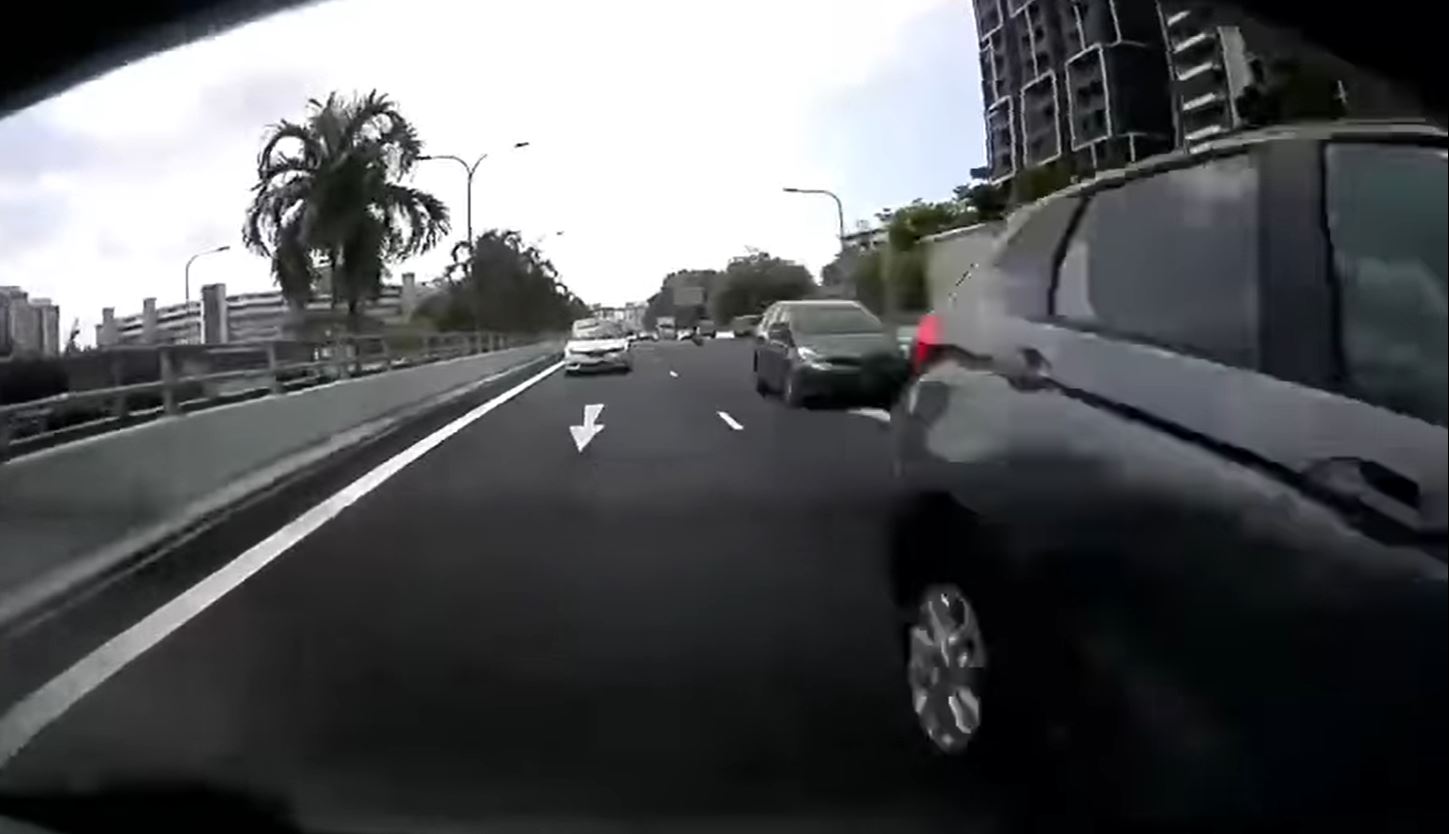 The Honda then lifts up into the air at an awkward angle as it goes out of frame, presumably because it flipped over. 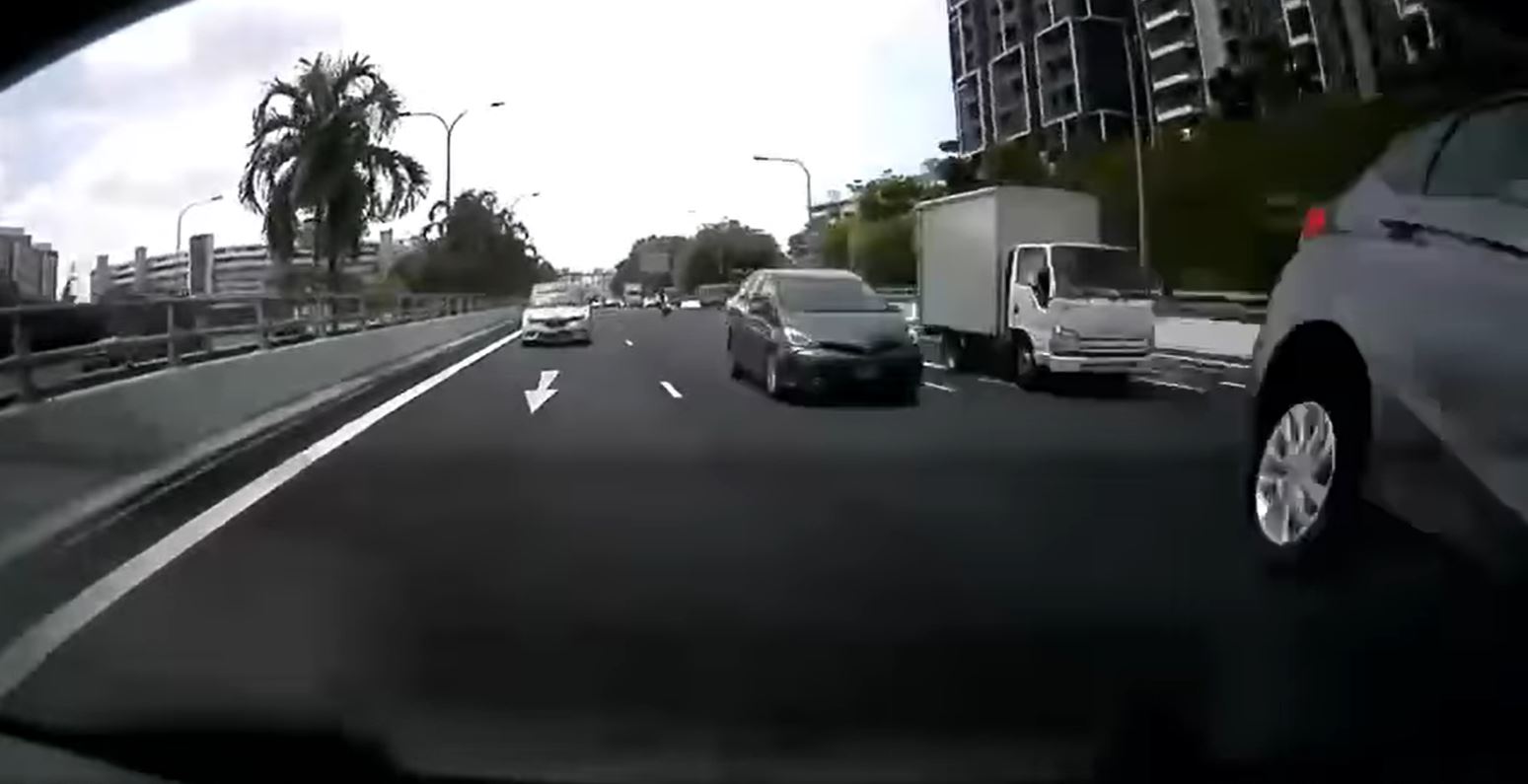 Other videos on social media, taken by passing motorists, show the aftermath of the accident, including the flipped car.

In 1 of them, a man in a white T-shirt is sitting at the side of the road. Another video shows paramedics attending to him. 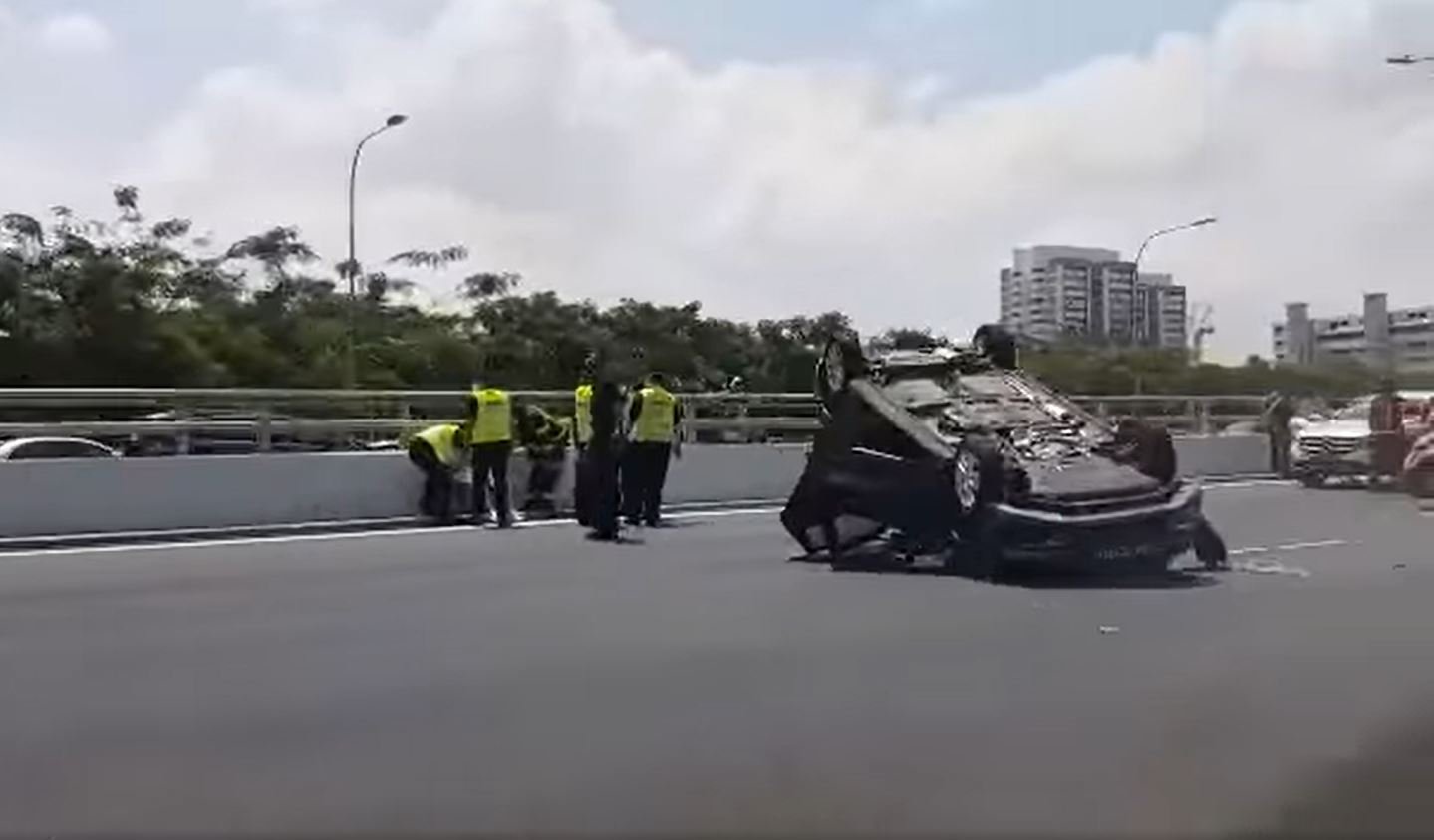 According to a tweet by the LTA at 1.17pm, the crash resulted in a jam till the Jalan Eunos exit.

5 cars and 1 lorry were involved in the accident, Channel NewsAsia (CNA) quoted the Singapore Police Force (SPF) as saying.

The men were taken to Tan Tock Seng Hospital (TTSH) and the girl was taken to KK Women’s and Children’s Hospital (KKH).

The SPF is also investigating the incident.

Wishing the injured a quick recovery

When an accident results in a car turning turtle, we’ll bet that high speed is involved.

While the details aren’t clear enough to determine what exactly happened, it’s always wise  to avoid speeding such that any crashes don’t cause serious injury.

MS News wishes those injured a quick recovery, and hopes the poor baby girl won’t be too traumatised.