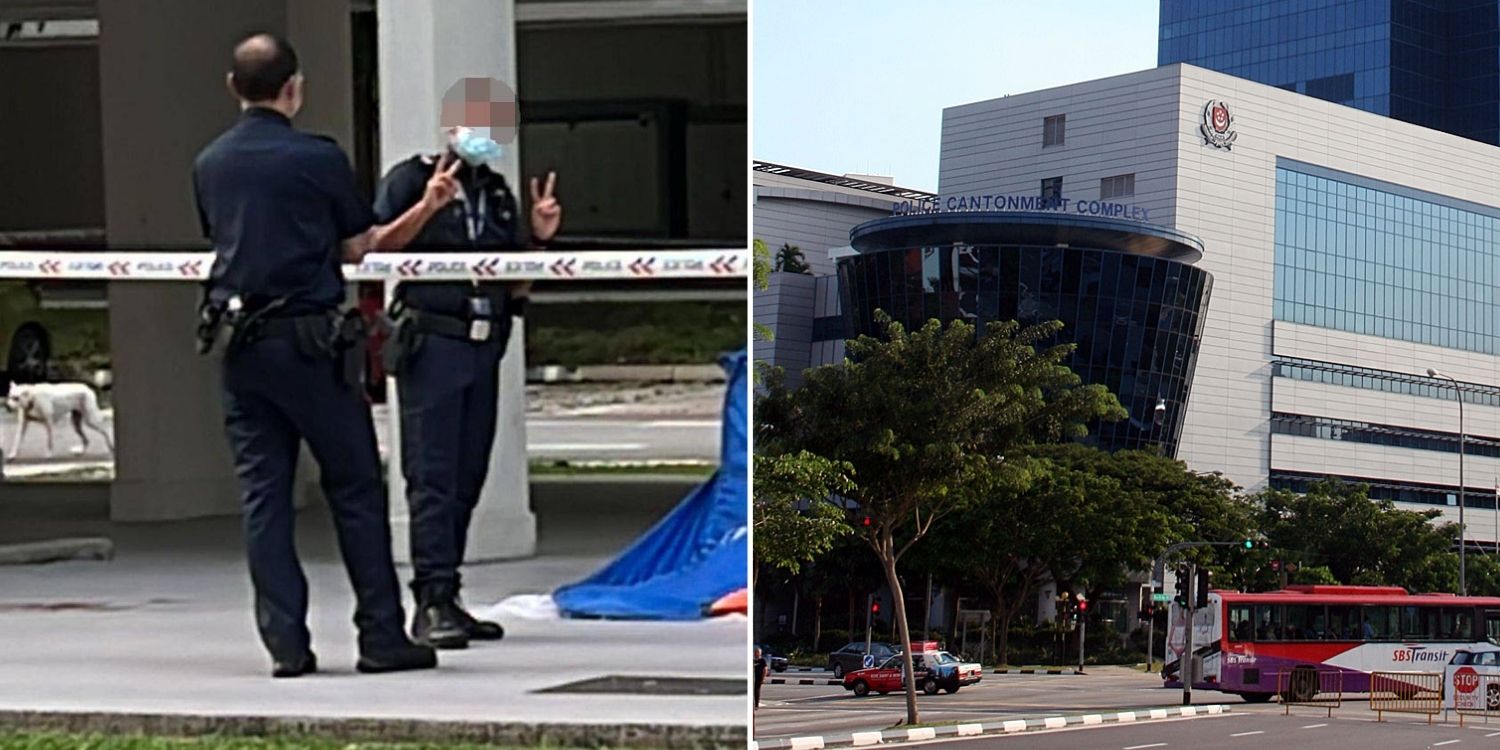 He responded inappropriately to the presence of onlookers.

Sometimes, our automatic response to having a camera pointed at us is to strike our best pose and show our biggest smile. While there is no harm in doing that, there is a time and place for everything.

An officer from the Singapore Police Force (SPF) may have forgotten his tact when he recently posed for a picture beside an ominous blue tent with two ‘peace’ hand signs. 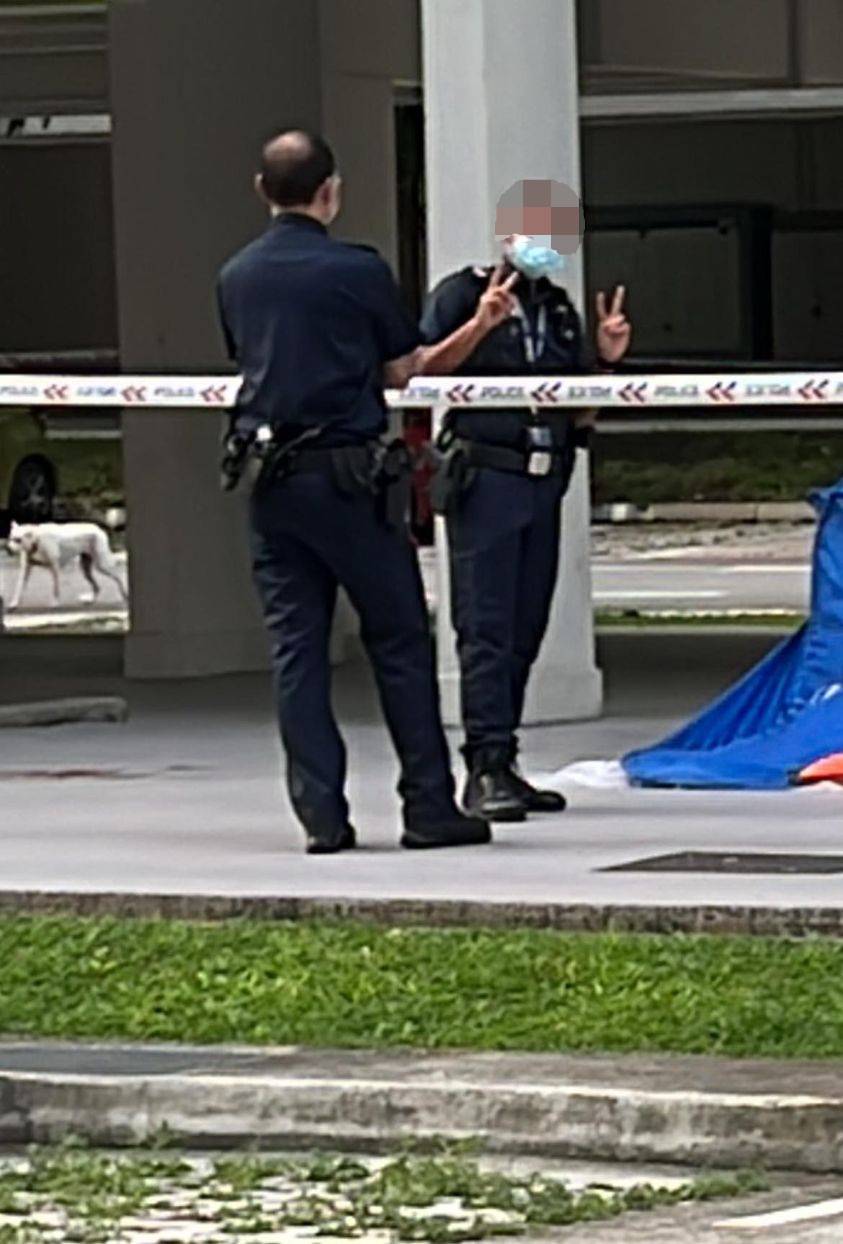 After the picture went viral on Wednesday (29 Jun), SPF quickly released a statement of apology and stated that they will be taking internal action against the officer.

A now-deleted Facebook post, resurfaced on the Hardwarezone forums on Wednesday (29 Jun) morning, providing some context behind the picture. 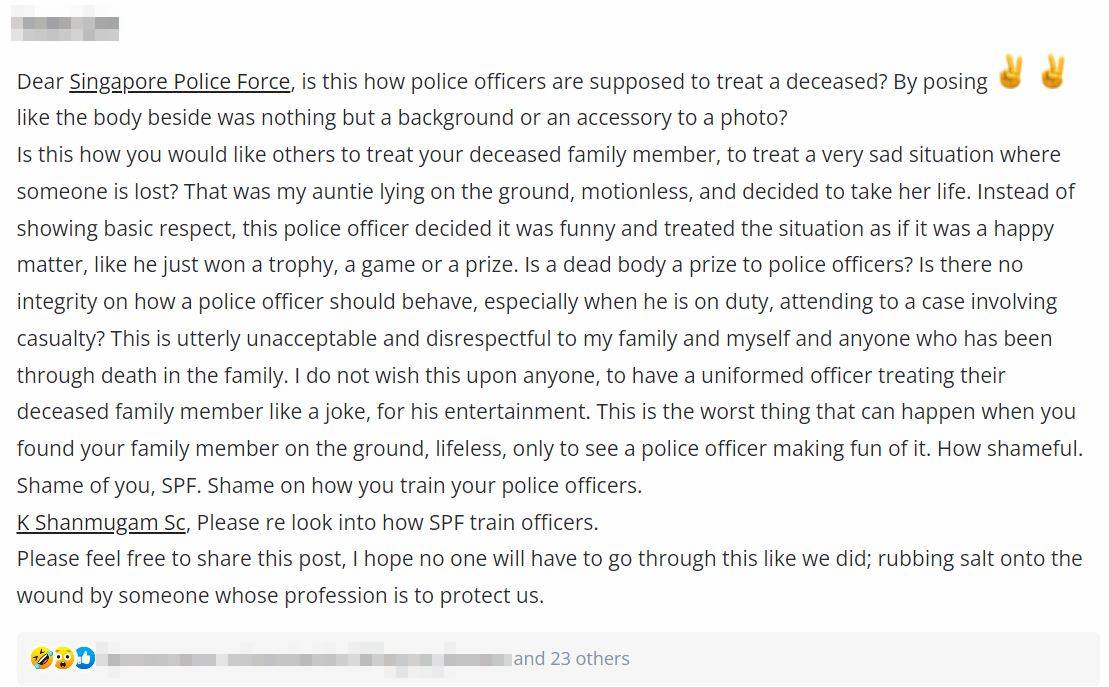 According to the post, the person under the blue tent was the aunt of the OP.

Understandably, the OP was upset with the officer’s unbecoming behaviour and conduct.

In particular, the OP wondered if the police officer was likening her deceased aunt to a “trophy” for one to smile about.

She also found the officer’s actions utterly unacceptable and disrespectful to her family.

Shortly after the image went viral, SPF issued a statement on Facebook to clarify the matter. 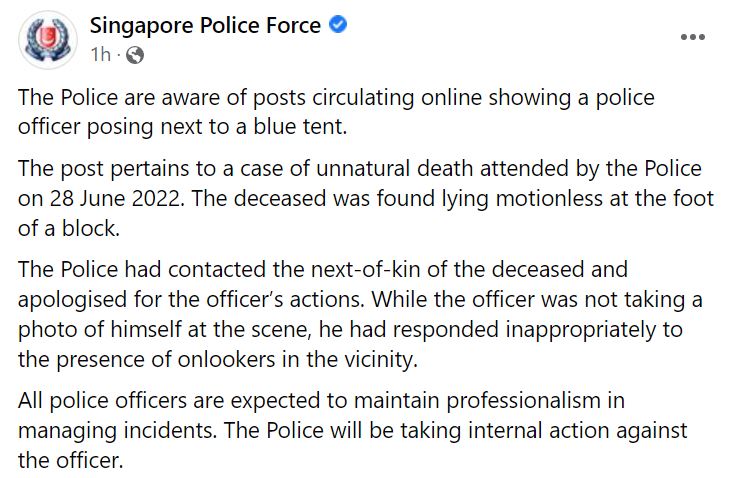 In the post, SPF stated that they are aware of the photo circulating online and has contacted the deceased’s next-of-kin. They also apologised for the officer’s actions.

SPF added that although the officer did not take a photo of himself, he had responded inappropriately to the presence of the onlookers in the vicinity.

Officers in the SPF are expected to maintain professionalism in managing incidents and due to this lapse, they will be taking internal action against the officer.

Officer’s pose is inappropriate given the gravity of  the situation

As a police officer, gruesome and ghastly incidents are part and parcel of the job.

While it does not minimise the gravity of the situation, it is possible that some may become desensitized over time.

Perhaps the officer may have momentarily let his guard down, causing him to pose for the camera.

Nonetheless, his actions are still inappropriate and we’re heartened by SPF’s swift response to the incident.