This comes after he praised ‘Les Bleus’ – the French World Cup team – for their “stunning victory”.

Check out Tharman’s cryptically timed Facebook post, penned on Monday (16 Jul). We summarise it after the jump. 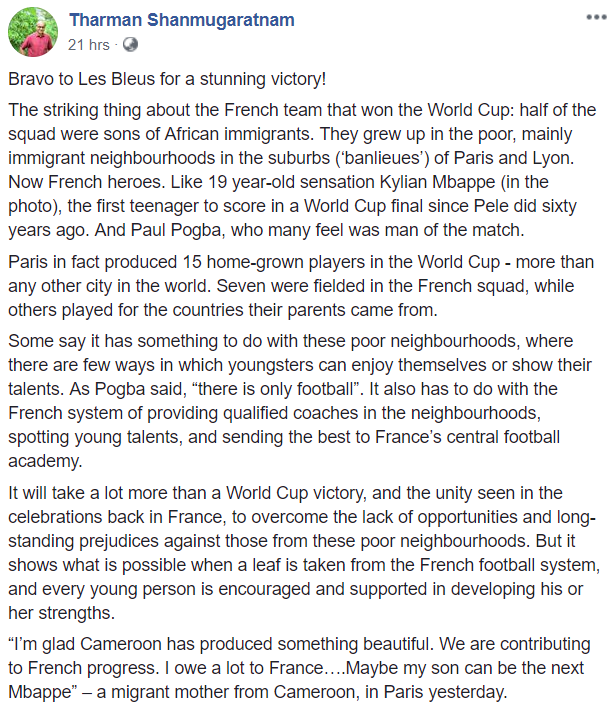 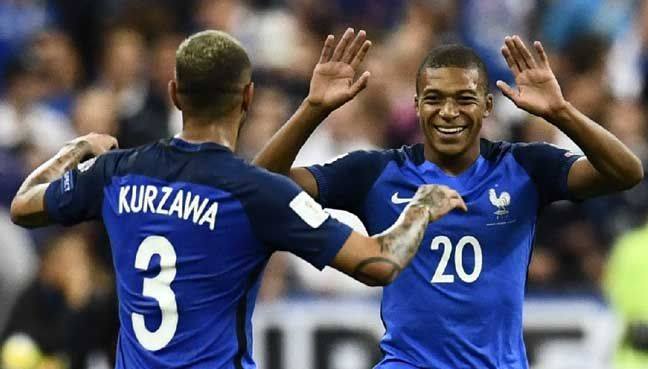 Immigrants, we get the job done

DPM Tharman begins with a hearty congratulations to France, for their historic World Cup win.

And describes the unlikely journey of the newly crowned “French heroes” of the team,

Half the squad were sons of African immigrants. They grew up poor, mainly immigrant neighbourhoods in the surburbs (‘banlieues’) of Lyon and Paris.

Tharman then commends 19-year-old Kylian Mbappé, arguably the breakout star of the tournament.

Mbappé became the first teenager in 60 years to score a goal in the World Cup final, since Brazilian football legend Pelé himself.

As well as Paul Pogba – whom he called ‘man of the match’.

Paris produced the most home-grown players in the world

Paris also deserves recognition for grooming “15 home-grown players”– 7 of whom played for the French team, according to Tharman.

He explained that some believe the struggles they faced in “poor neighbourhoods”, inspired them to pursue their football dreams with greater fervour.

Tharman credits the French football system which does the following:

DPM Tharman admits that the delirious celebrations from France’s WC victory, will not stop the prejudices that players from poorer neighbourhoods face.

However, Tharman quips, the system’s longstanding commitment to nurturing football talent still allows for this,

Every young person is encouraged and supported in developing his or her strengths.

Our Deputy Prime Minister ends off with a beautiful quote from a migrant mother from Cameroon who lives in Paris,

I’m glad Cameroon has produced something beautiful…I owe a lot to France…Maybe my son can be the next Mbappé.

Upon reading Tharman’s post, netizens have swarmed the comments section to bring up local football player Ben Davis’ case to the minister.

Mostly, commentors asked Tharman to help Ben Davis with his National Service deferment, so he could be SG’s version of Mbappé.

However, some were cautious about hastily drawing comparisons to Mbappé.

And called for everyone to “rein in our emotion(s) just a little bit”. We think that’s fair as Ben Davis hasn’t actually played in the World Cup yet.

Of course, with NS duties in the way of his training programme, he may be less equipped to become that star player.

The case of Ang Peng Siong

Others brought up the case of national swimmer Ang Peng Siong on the thread — the first Singaporean before Joseph Schooling who “could have been an Olympic medallist”.

Although he once held the position of World Number 1 ranking in the 50m freestyle event, Ang’s NS deferment application was unsuccessful.

A netizen also criticised the “rigidity of our system”, which potentially allowed for the loss of “many talents”.

And wondered aloud if Ben Davis’ case would result in a situation to Schooling’s post-Olympic win, with “everyone want(ing)…a photo op” to “try to show off that support was given”.

Serving the nation in many ways

We’ve instituted a strict policy of having every man serve his National Service in Singapore — with little to no exceptions.

This is to ensure everyone serves the nation by doing their duty.

However, in Ben Davis’ case, it seems like the lines are increasingly blurred.

Perhaps another way to look at it will be that he’ll be serving his duty eventually — whether he’s reppin’ Singapore in a global football career, or marching in-line with our boys in green.

There’s no better time than the present to relook our priorities, before our worst fears are realised.

Driving young Ben Davis into the arms of other nations, and watching on in envy as he makes his global debut.