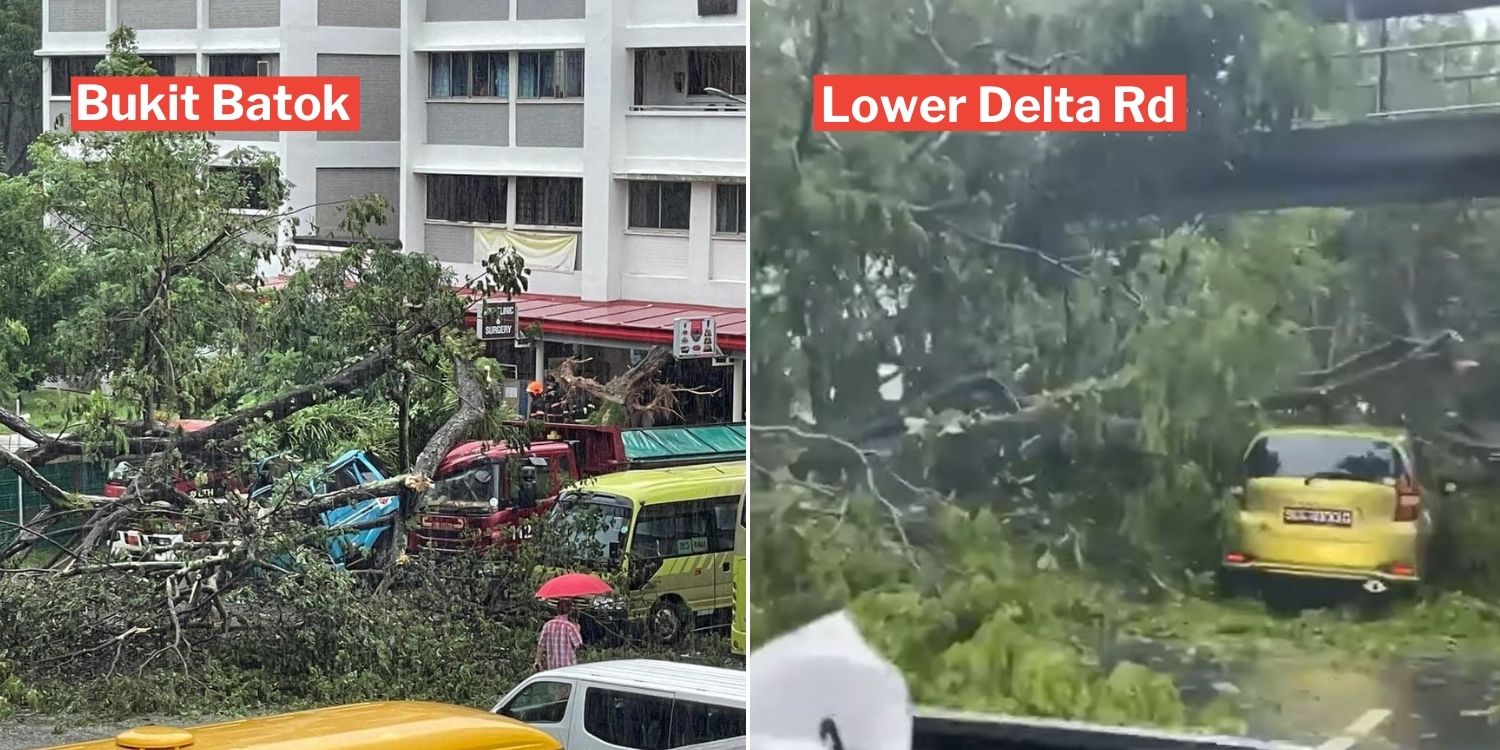 Trees are more likely to fall when there's heavy rain.

2 Trees Reportedly Fall On Vehicles In The Same Day, No Reports Yet On Whether Anybody Was Hurt

The massive downpour on Saturday (17 Apr) caused parts of Singapore to be flooded and the temperature to plunge.

But, those weren’t the only problems – motorists also had to be extra careful, and not just because of the water on the road.

They had to watch out for trees falling, which tends to happen when there’s heavy rain.

Unfortunately, at least 2 incidents of trees falling on vehicles were reported on the same day. 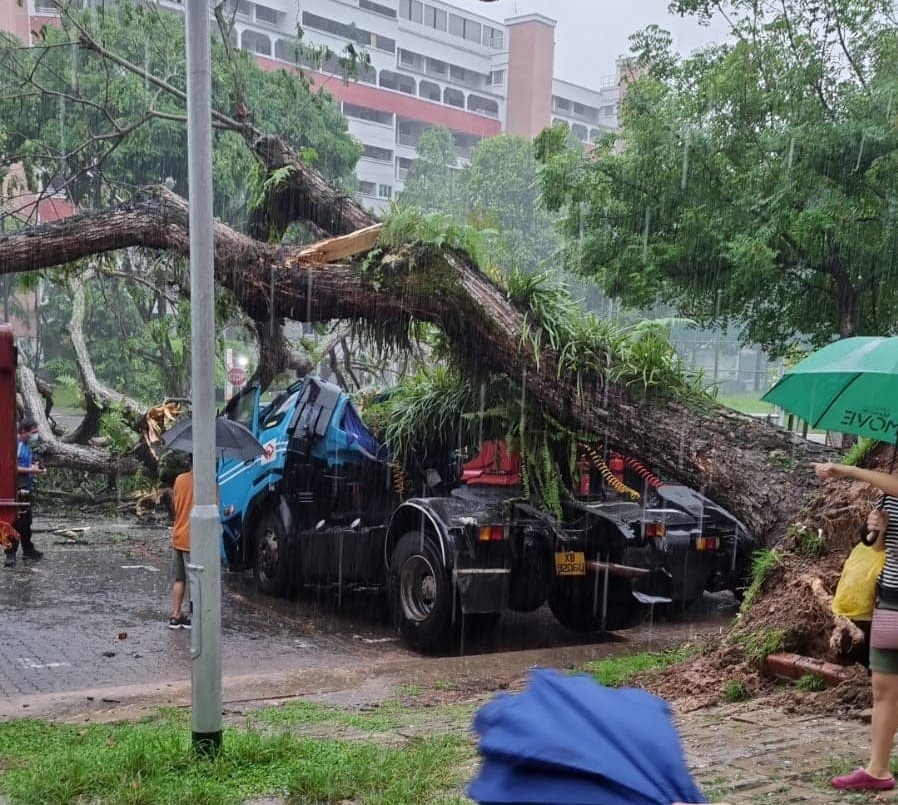 Hopefully, nobody suffered serious injuries from the incidents.

The 1st incident occurred at the open carpark outside Block 166, Bukit Batok West Avenue 8, according to a Facebook post by ROADS.sg.

From the photos posted, it seems that at least 3 lorries were hit by the falling tree. 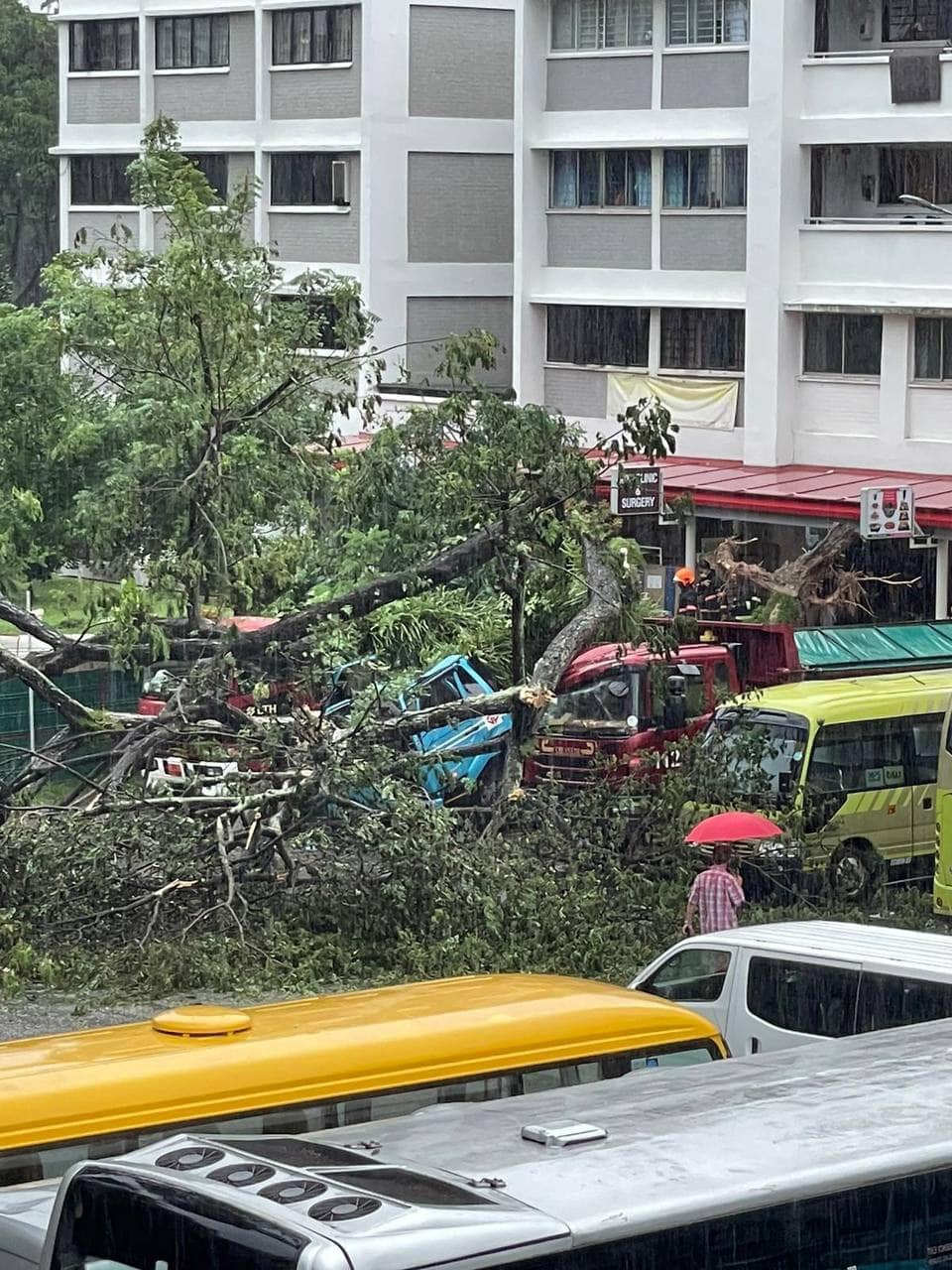 The blue lorry in the centre appears to be the worst hit, as its cabin has been tilted to one side.

For tough vehicles like these to be damaged, the tree that fell must have been quite heavy indeed.

In another photo, the cabin of one of the red lorries has its roof caved in and windshield cracked. 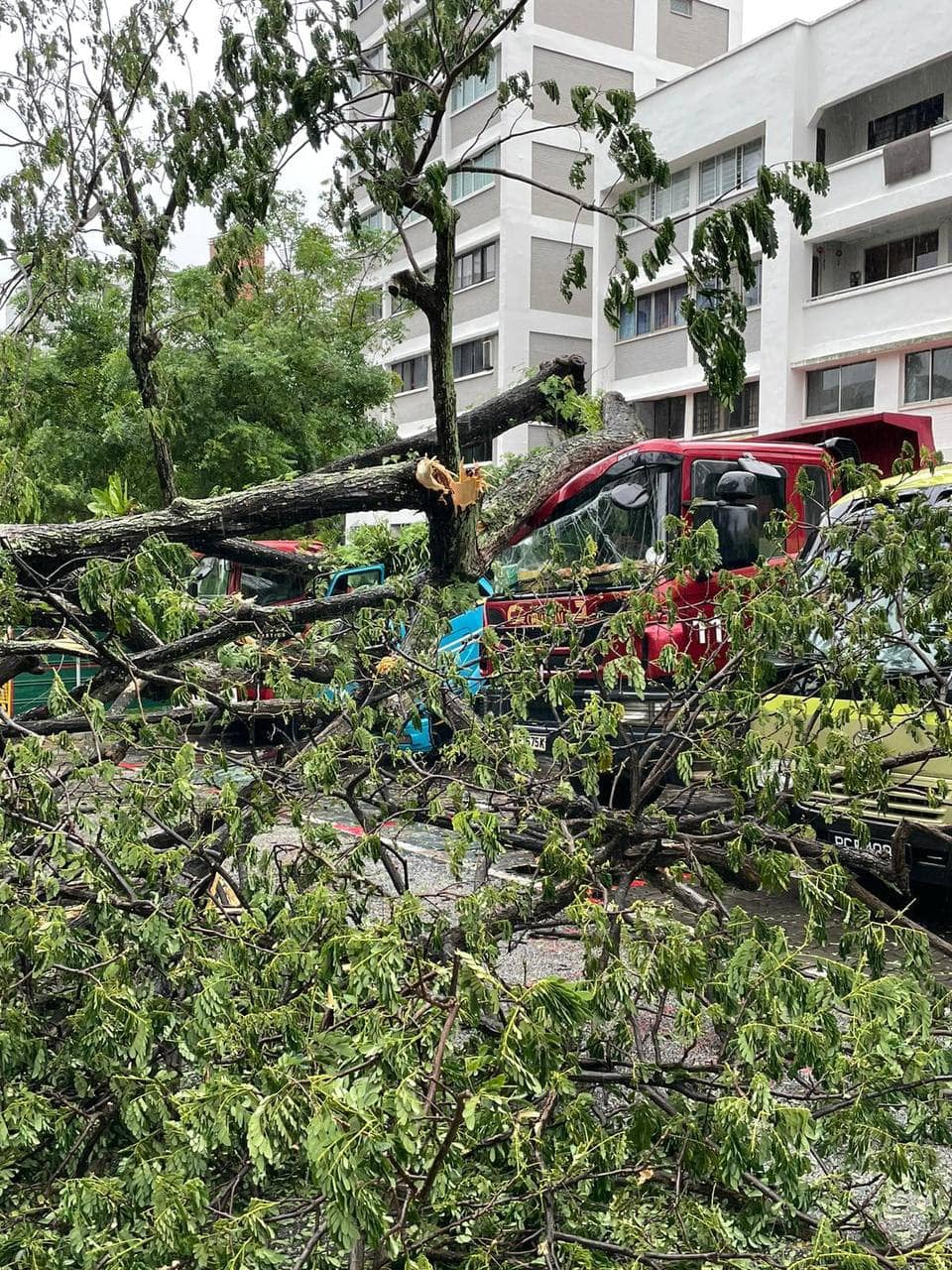 Hopefully, nobody was inside the lorries when the tree fell.

Restaurant & clinic next to the carpark

According to images of the block from Google Maps, there’s a restaurant and clinic just next to the carpark.

The carpark also seems to be popular for buses to park, and has a few big trees. 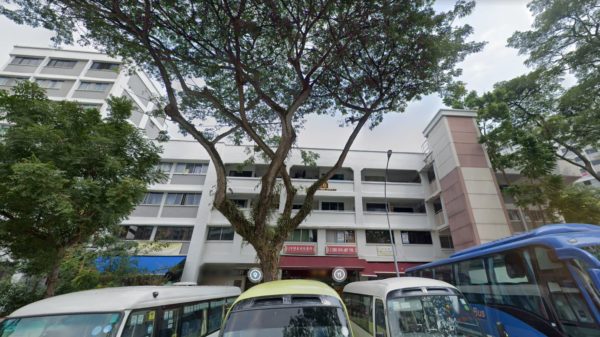 Thus, it may be lucky that the tree fell towards the vehicles instead of the clinic and restaurant, or people there may have been hurt.

The other incident happened at Lower Delta Road at about 2.45pm, according to the caption of a video uploaded by ROADS.sg.

The video was apparently recorded by a driver who drove past a sight you don’t see everyday – a car stuck on the road, surrounded by a tree. 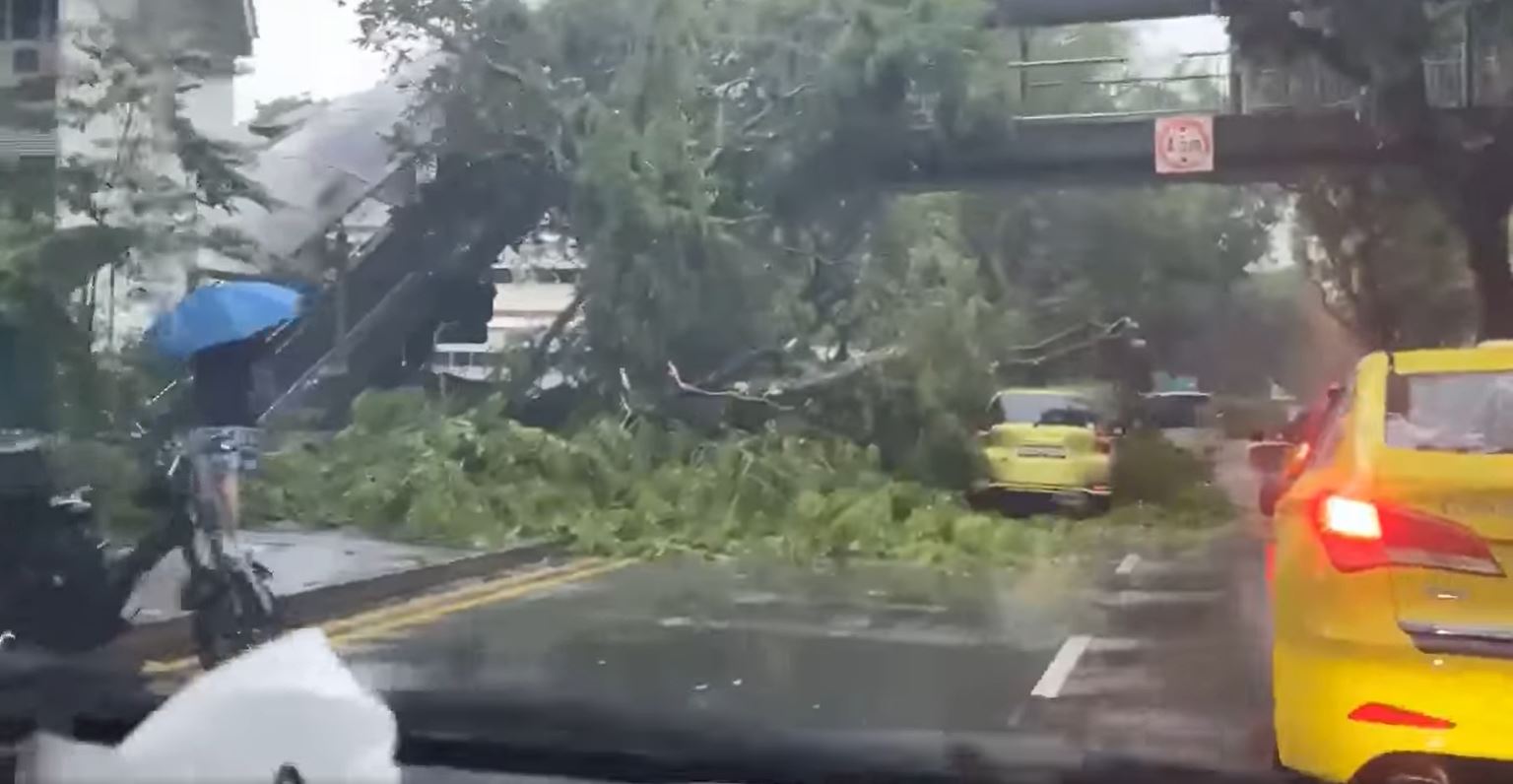 As the driver goes closer, it becomes apparent that part of the tree’s branches had fallen on top of the unfortunate yellow car’s roof, windshield and bonnet. 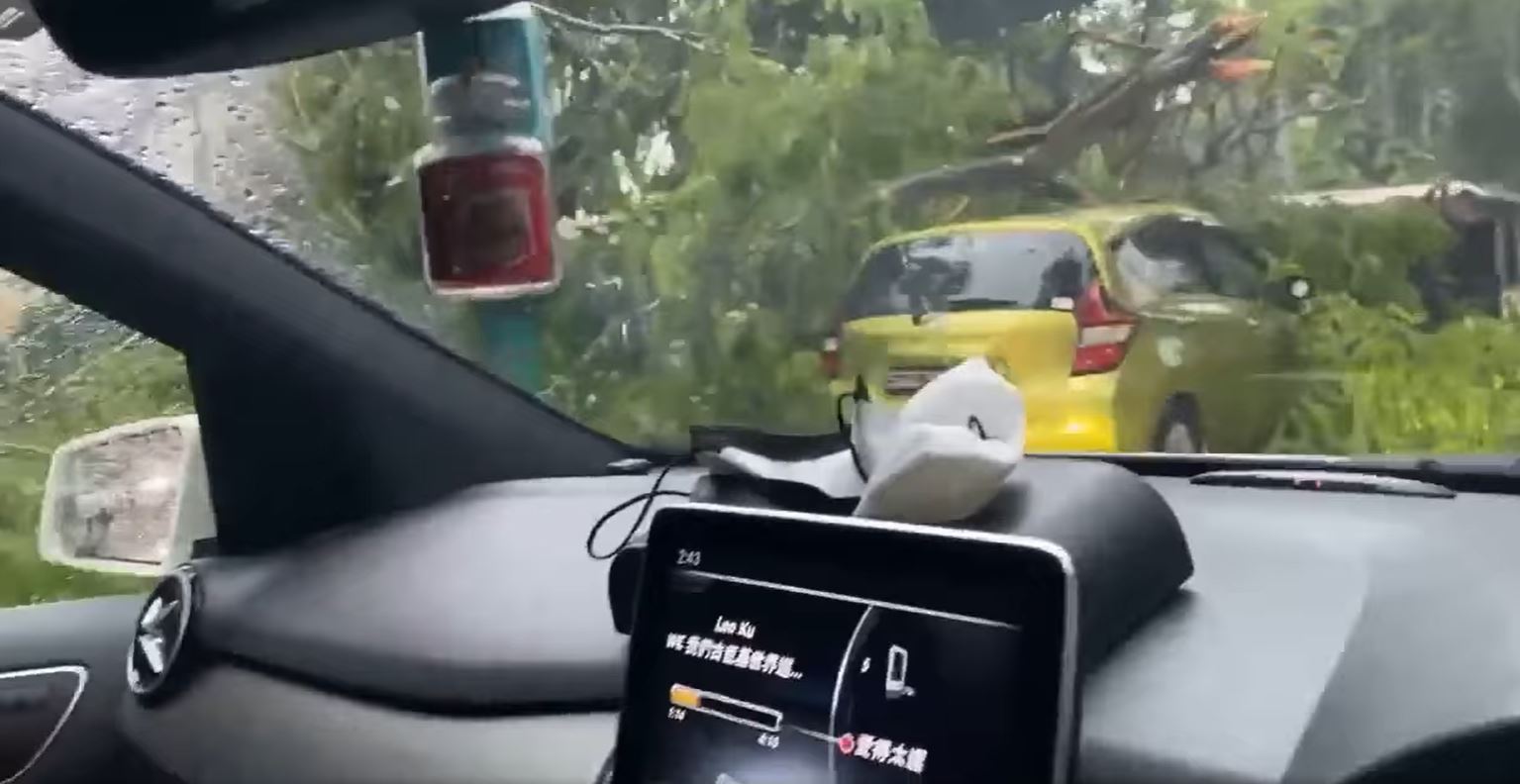 This possibly happened just as the car was driving past.

As the car was on the road, there was definitely at least a driver inside, so hopefully, he or she and the other occupants of the car weren’t hurt.

The incident echoed a similar one in Tiong Bahru in Mar, when a tree branch abruptly fell on a car. In that incident, 1 person was conveyed to Singapore General Hospital (SGH).

Do keep a lookout when it rains

We might think that trees falling on vehicles are freak accidents. But it happens more often than we think, judging from these 2 incidents that occurred in just 1 day.

And as we can see, it doesn’t matter whether the vehicles are parked or on the move.

What’s certain is that trees are more likely to fall when there’s heavy rain, so do keep a lookout the next time it rains.

MS News has reached out to the Singapore Civil Defence Force (SCDF) over the 2 alleged incidents, and will update this story when they release further details.