Too bad kids, school's still on.

You’ve definitely received at least 1 message about the coronavirus by now.

Whether it’s an announcement about another suspected case, or a touching video of Chinese doctors, it’s almost certain that there’s one on your phone, right now.

It can be difficult to know for sure what’s fake and what’s not sometimes. Luckily, Channel NewsAsia(CNA) just confirmed that one tweet being spread around was indeed fake.

The tweet was rather widely circulated on instant messaging platforms like WhatsApp for a couple of hours before CNA debunked it an hour later. 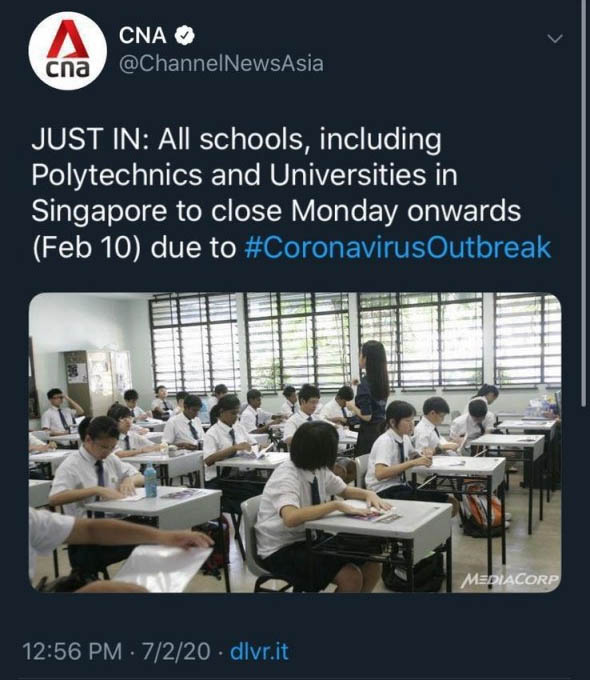 It announces that all schools will be closed from 10 Feb onward due to the coronavirus outbreak. This includes universities and polytechnics.

CNA published an article debunking the tweet soon after it started being circulated earlier today.

They pointed out minor details that were telltale signs of it being fake.

Firstly, CNA informed readers that tweets sent out automatically don’t contain hashtags, whereas this one does.

The edited image also has an outdated watermark, which was changed in 2015.

CNA even included an image of the actual tweet they released at the same time the fake tweet was purported to be released. With the coronavirus situation at hand, many people are sending images and chain messages containing ‘important’ information that supposedly come from reliable sources.

Many of these images and messages look very convincing, and may sound convincing too, but are actually doctored. If you’re not careful, it’s easy to fall prey to fake news.

We should all be wary of what messages we send and receive, so as not to spread false rumours and aggravate the already tense situation.

If you receive messages like these, please verify their legitimacy before spreading them. It’s difficult to be sure of what’s real out there these days, so take everything with a pinch of salt unless you’re absolutely certain.