Dengue is still a threat.

For the past few months, we’ve been social distancing and donning face masks to avoid Covid-19. But let’s not forget that dengue remains a threat too.

She was bitten by a mosquito after hanging out with colleagues outdoors. This was followed by a difficult recovery that she described as the ‘worst days of her life’. 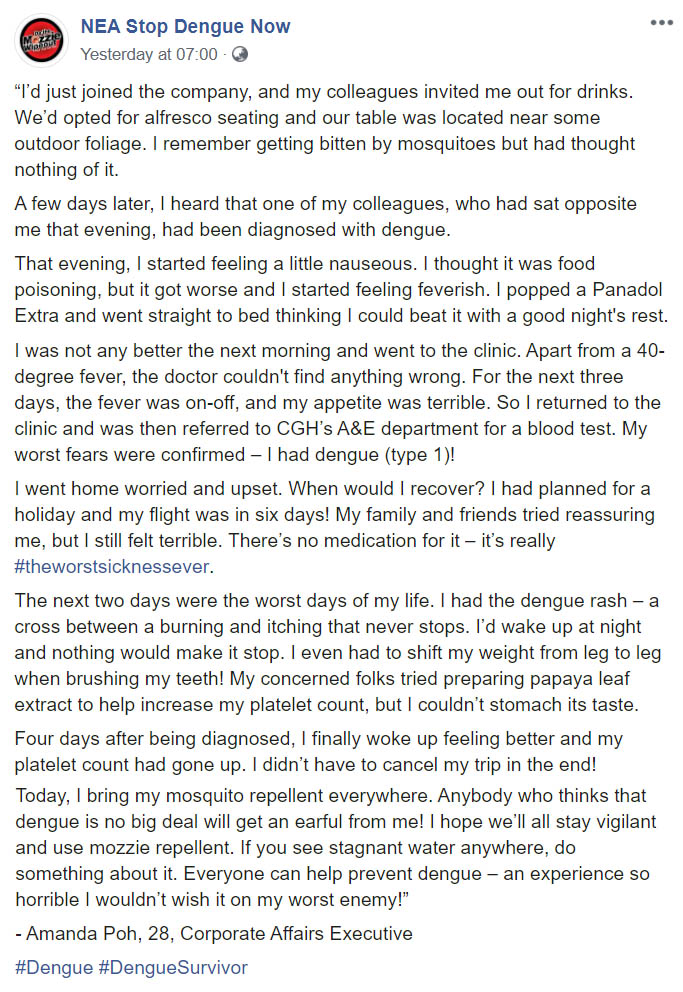 While the threat of dengue may pale in comparison to Covid-19, her story reminds us to stay alert at all times.

Ms Poh’s brush with dengue began when her colleagues invited her out for a drink after she recently joined the company.

Despite the risk, she joined her co-workers in an outdoor table that was close to a foliage area. She recalled getting mosquito bites but didn’t think much of them. 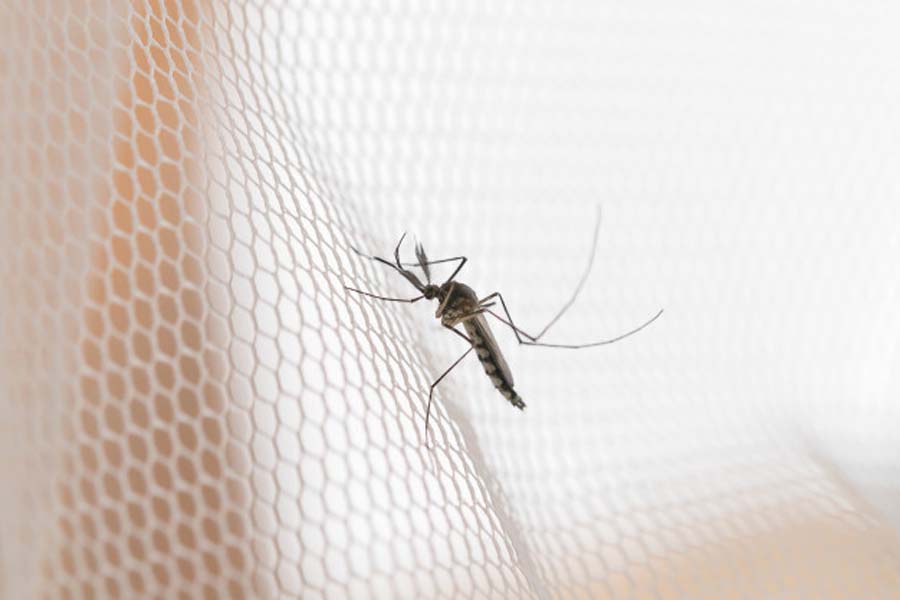 A few days after her adventure, she discovered that her colleague had dengue fever. During their hangout, they sat at the opposite ends of the same table, so her health was potentially at risk.

That evening, Ms Poh felt the first signs of dengue when she started to feel nauseous.

Initially, she suspected that it was food poisoning, but she felt the pang of sickness and the onset of fever.

After consuming a few pain relievers, she went to bed and assumed she would recover after a good night’s rest.

However, Ms Poh didn’t feel better by morning. Aside from her 40-degree fever, her doctor couldn’t detect any other illnesses so she returned home.

In the next 4 days, Ms Poh suffered from a terrible appetite and an on-off fever.

She returned to Changi General Hospital’d Accident & Emergency department and received a blood test. The results confirmed her worst fears — she had dengue (Type 1).

Shortly after, she went home feeling upset and worried. Prior to her unfortunate diagnosis, she planned to go on a holiday and her flight was in 6 days.

My family and friends tried reassuring me, but I still felt terrible.

Unfortunately, there was no medication that could help her recover in a flash.

Worst days of her life

Once her illness was confirmed, Ms Poh described the next 48 hours were the “worst days” of her life. She experienced a dengue rash that felt like an itching and burning feeling, which never ceased. At night, she would wake up due to the itchiness, and nothing could make it stop. Even the simple task of brushing her teeth remained difficult due to the persistent rash.

Fortunately, she sensed the onset of recovery. She woke up feeling refreshed while her platelet count increased.

In the end, she was able to take her scheduled trip. 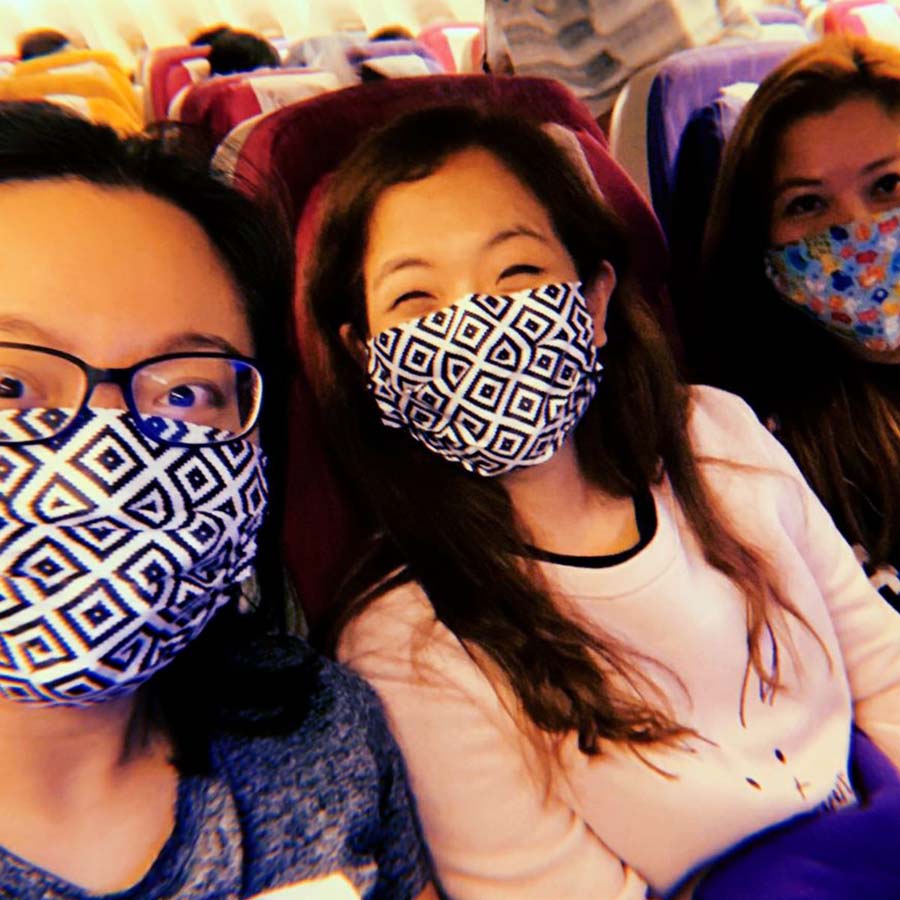 Ms Poh recalls that the road to recovery was so difficult that she wouldn’t wish it upon her worst enemy.

As a result, she religiously brings her mosquito repellent after the incident. She also reprimands people who think that dengue is “no big deal”. 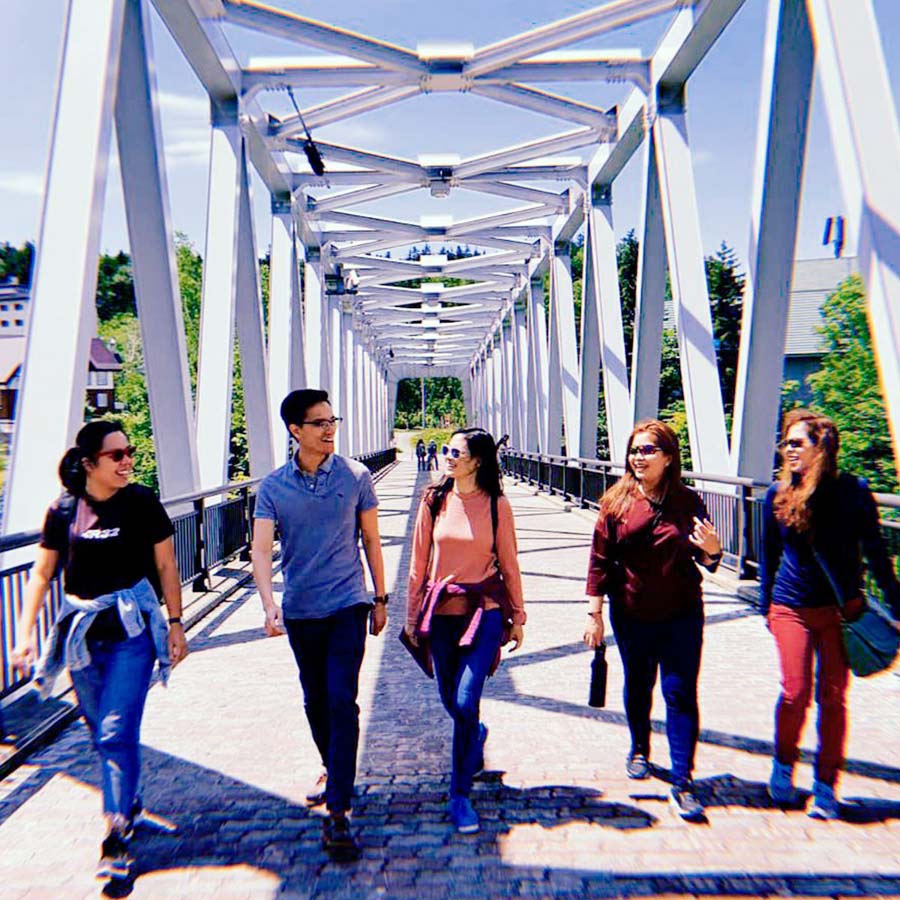 Ms Poh and her friends during their Hokkaido trip
Source

Some of us may feel complacent over catching dengue, but she hopes that everyone remains vigilant and continues to use mosquito repellent.

We bet your eyes are glued to Covid-19 updates but don’t forget that dengue can easily land you in a hospital too.

Singapore has experienced an astounding 9,261 dengue cases in 2020. If the trend continues, the numbers may surpass 22,170 cases, which was the record high in 2013.

Similar to the coronavirus, there are preventive measures you can take to avoid this illness. Get rid of stagnant water. Wear protective clothing and use mosquito repellents.

How are you avoiding dengue? Let us know in the comments.

Featured image from Facebook and Freepik. Right image is for illustration purposes only.