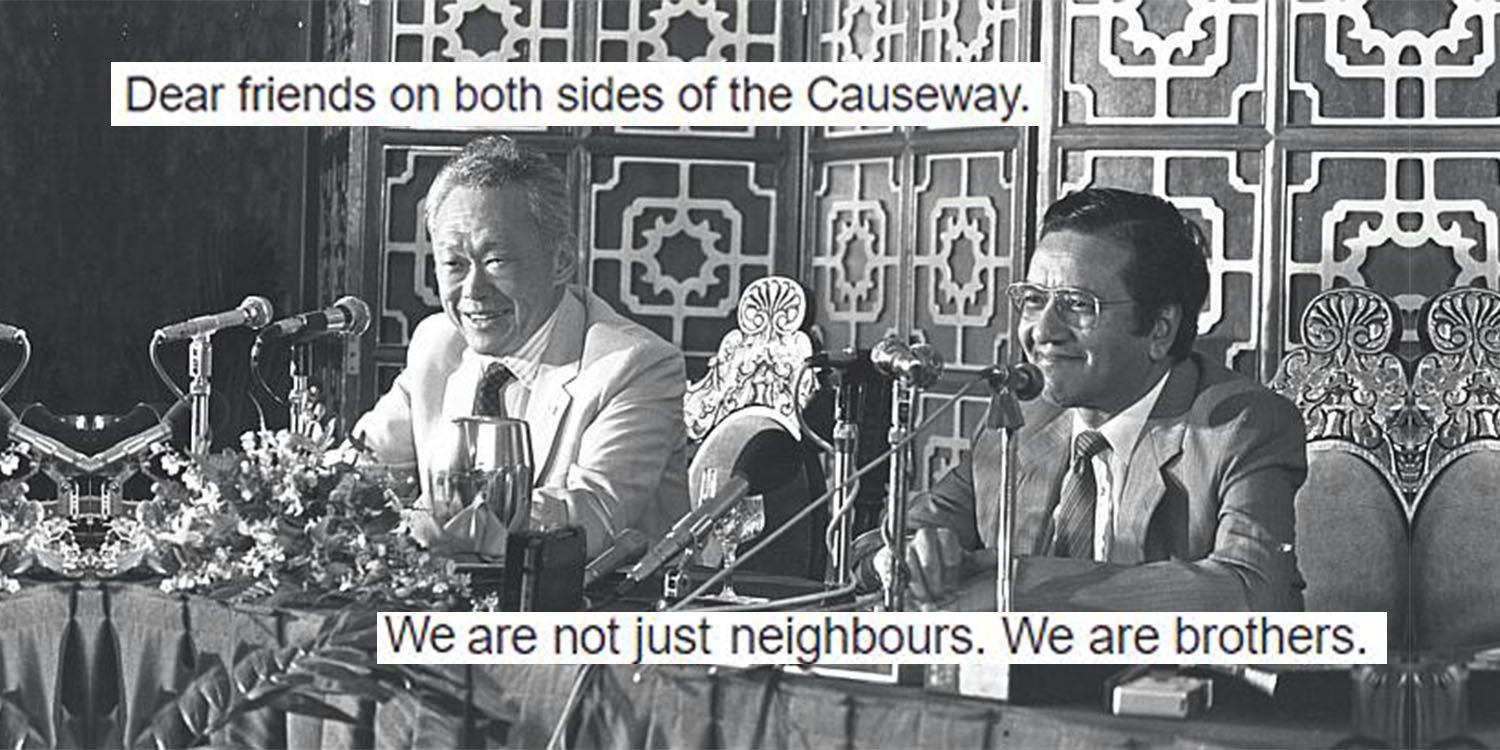 We're with you till the end of the line.

Singapore Has Been Rooting For Malaysia Since The Start

Brothers tend to have contentious relationships on the surface. Despite occasional tiffs, their mutual love and respect for each other, often remains unspoken.

That’s exactly the case for the Singapore and our closest neighbour, Malaysia. At least, according to a local netizen named John Lam.

He took to Facebook to remind everyone of the brotherly relationship that Malaysia has shared with Singapore over the years.

Here’s his post in full, we also summarise it after the jump.

Mr Lam began his post by addressing his friends from both ends of the Causeway, and the elephant in the room — our unexpectedly tense bilateral relations with Malaysia in recent weeks.

He believes that labelling our situtation as “tumultuous times” is a gross exaggeration, but the threat of escalating into a war between both nations remains very real.

Instead of focusing on what drives us apart, Mr Lam endeavoured to remind both Singaporeans and Malaysians of this,

We share more than just 2 land bridges and a love for chendol or cendol.

Besides our close proximity and mutual love of good food, he points out that “virtually everyone has a friend or family” on the other side of the Causeway.

Historically, we have also been together far longer than “we have been apart”.

John believes that Singapore remains one of Malaysia’s biggest fans and pillars of support in more ways than one.

By pouring “investments into Malaysia” and being the “largest foreign employer of Malaysian labour”, we have shown our support for Malaysia’s economy in practical ways.

Earlier this year, when 92-year-old Dr Mahathir won the election, Singaporeans were among those who rejoiced when the “kleptocracy” was overthrown.

When Dr M graced our shores last month, NUS conferred an honorary degree to the alumnus, and named an orchid after him. Small gestures that indicated our sincerity in fostering closer ties with Malaysia.

In times of trouble, Mr Lam writes that we’ve always stood stoically by Malaysia’s side.

To help Johor Bahru through their drought earlier this year, Singapore had gone “above and beyond our contractual obligations” by supplying greater amounts of treated water.

John adds that Singapore joined efforts to locate MH370’s remains after the tragic crash, as our nation “mourned” alongside those who lost their loved ones.

As for the High Speed Rail’s contract, we reduced the penalty for postponing the project to a token sum of S$15 million.

With you till end of the line

From sharing the frontline of the 2004 tsunami’s rescue efforts, to being the first to place financier Jho Low on Interpol’s wanted list — Mr Lam believes that Singapore has taken swift actions to come to the aid of our neighbours when they needed us most.

After all, we have vehemently agreed on at least one thing this year — rendang should never be crispy.

He calls for everyone to stop focusing on narratives that may “divide us”.

Regardless of who is right, there is one truth — We have much more that unites us than divides us.

Finally, Mr Lam shares that we may appear “rigid and stuck up” as we live in a “fine city”.

However, he believes most Singaporeans genuinely want the best for Malaysians.

When you fall, we mourn with you, when you rise, we cheer with you. Because at the end of the day, we are not just neighbours. We are brothers.

John simply hopes that we can do our parts as citizens of both nations to share this sentiment with those around us.

While our governments work out a deal to solve the current impasse, we can help de-escalate tensions on both sides of the border, one person at a time.

On a positive note, there’s only one Malaysian vessel left within our maritime borders as of today (13 Dec).

We sincerely hope that Mr Lam’s sentiment will be heard by everyone who loves peace as much as they love to hate crispy rendang.

7 Times Singapore & Malaysia Got Along Perfectly