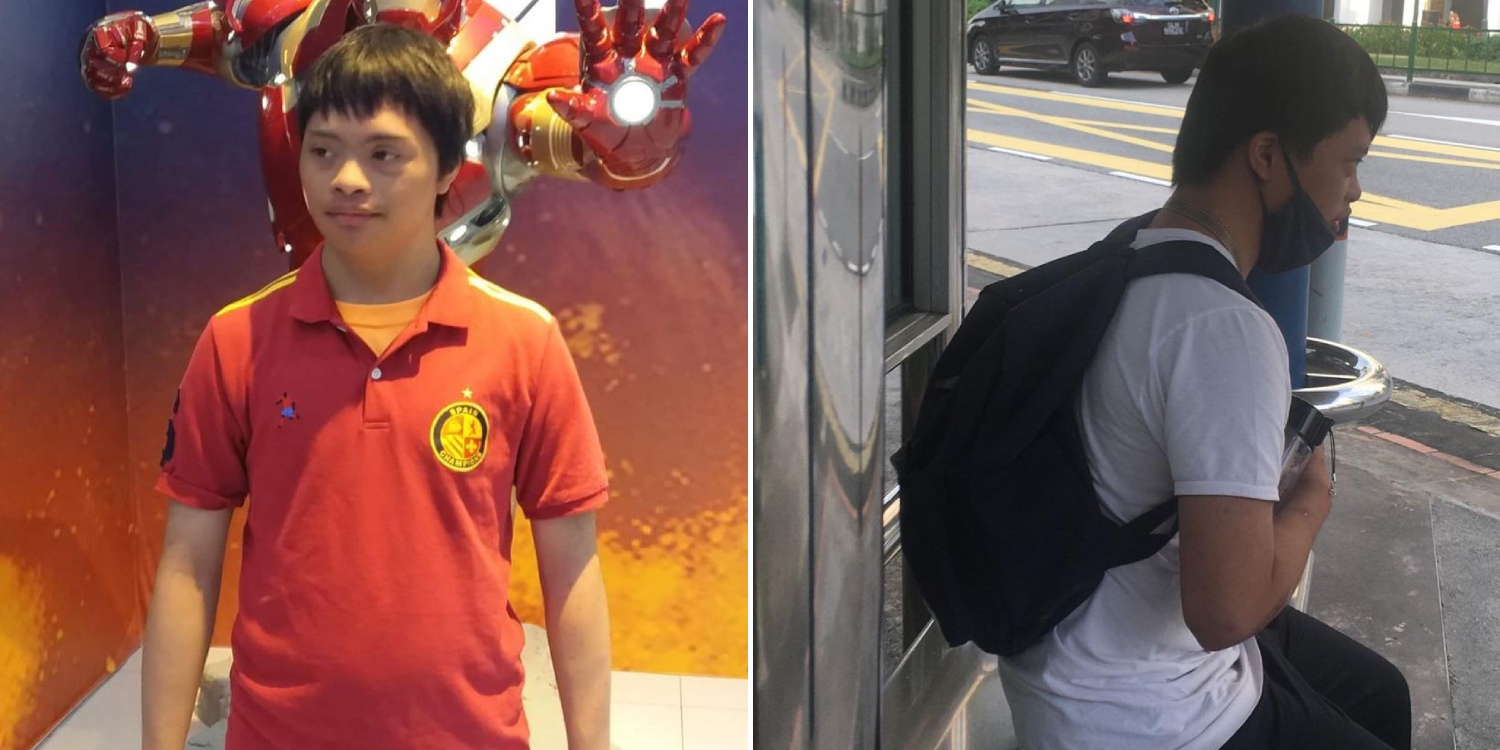 Many Good Samaritans went out to help look for the boy.

As we’ve seen from numerous examples, social media is very much a double-edged sword.

While it has encouraged harmful ‘challenges’ in the name of virality, it’s also been a platform to promote important causes and rally strangers together to help.

Recently, we got to see another heart-warming example of the World Wide Web being harnessed for good right here in Singapore.

When a woman went online to appeal for help to find her missing teenage brother with down syndrome, the internet sprung into action.

Thanks to their efforts, the boy was eventually found, leading his sister to declare that her faith in humanity has been “restored”.

On Sunday (26 Jun), Instagram user @yasminzaini, aka Yasmin Zaini, shared that her family had been trying to look for her missing teen brother since 3pm. 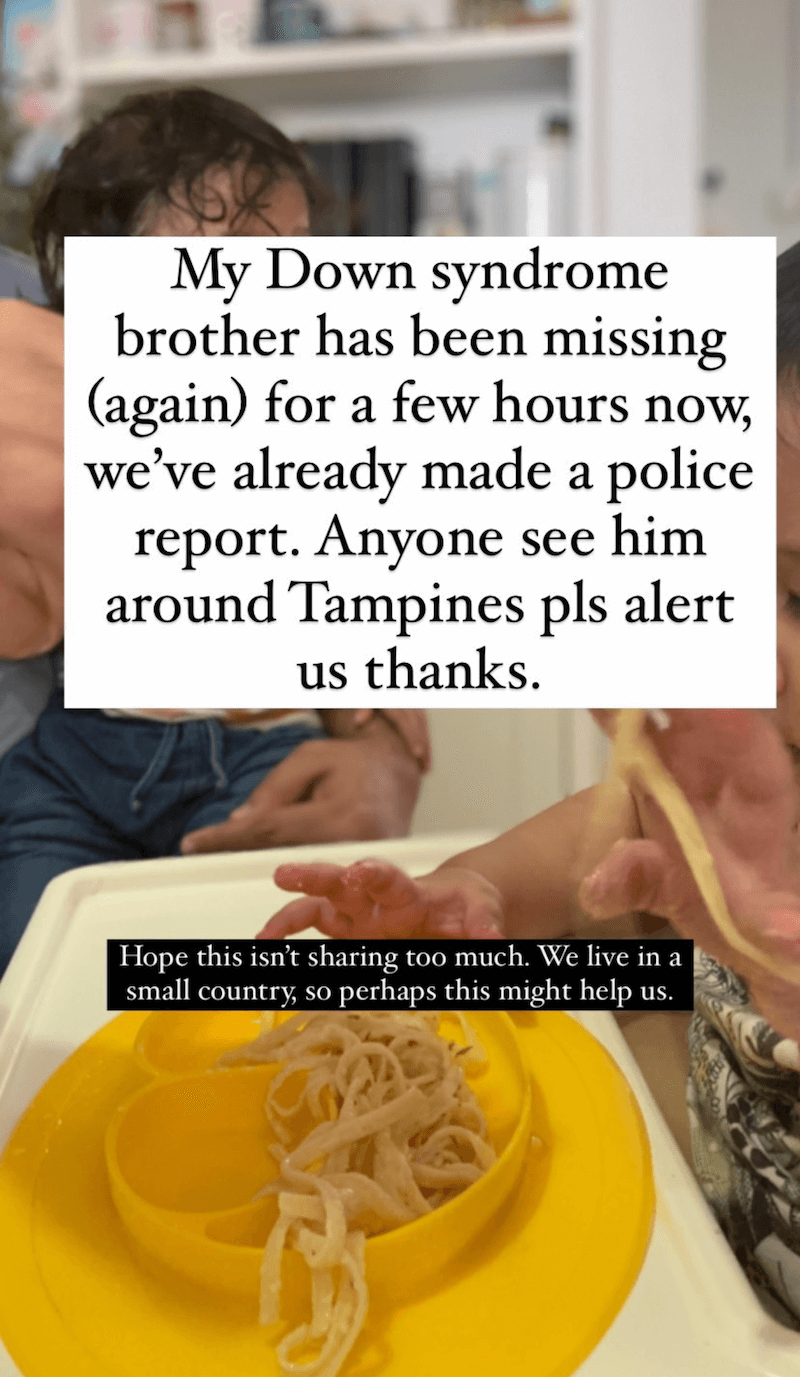 She shared that her brother might not know he is lost or to ask for help as he has down syndrome.

His last detected location was at Tampines Central, and while he is non-verbal, he responds to his name Khidir.

His sister added that he could be “sad” and “sitting quietly somewhere like a bus stop or under the block”. 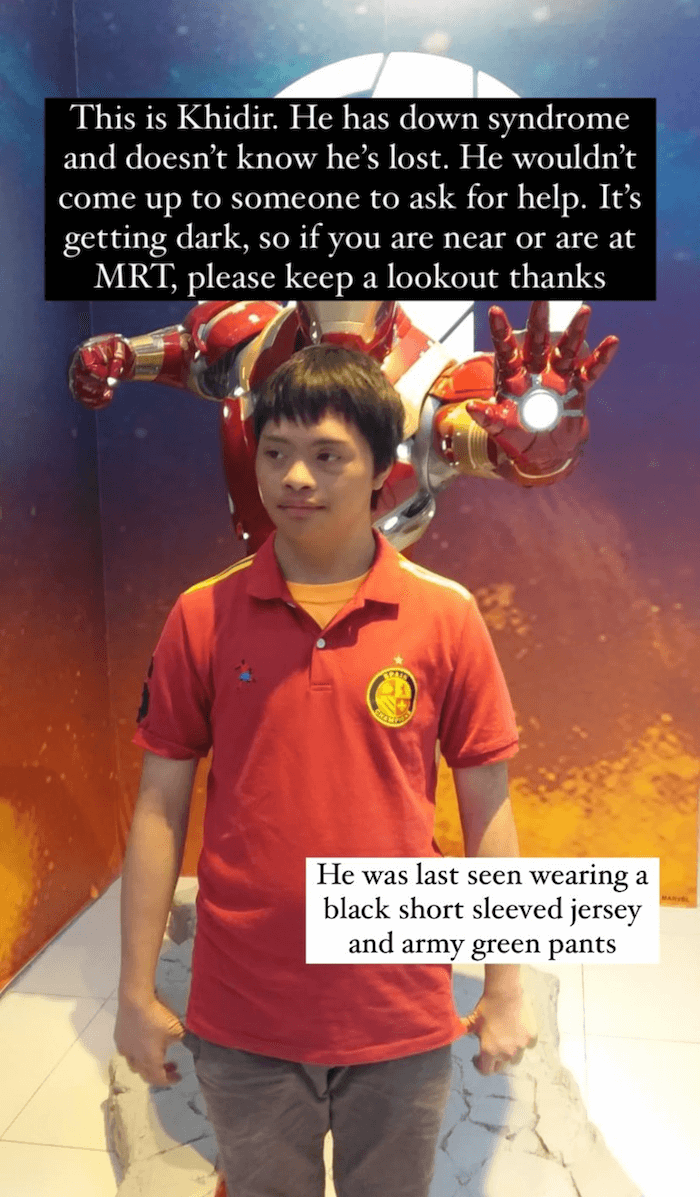 Upon seeing the news, numerous folks went out to conduct their own searches for Khidir.

At around midnight, Ms Yasmin started hearing from people who had spotted Khidir all the way at Khatib MRT.

Her parents quickly rushed down to the area and found him “walking in complete darkness” at Yishun Bus Interchange. Fortunately, he was safe and sound, just hungry and desperate for the toilet. 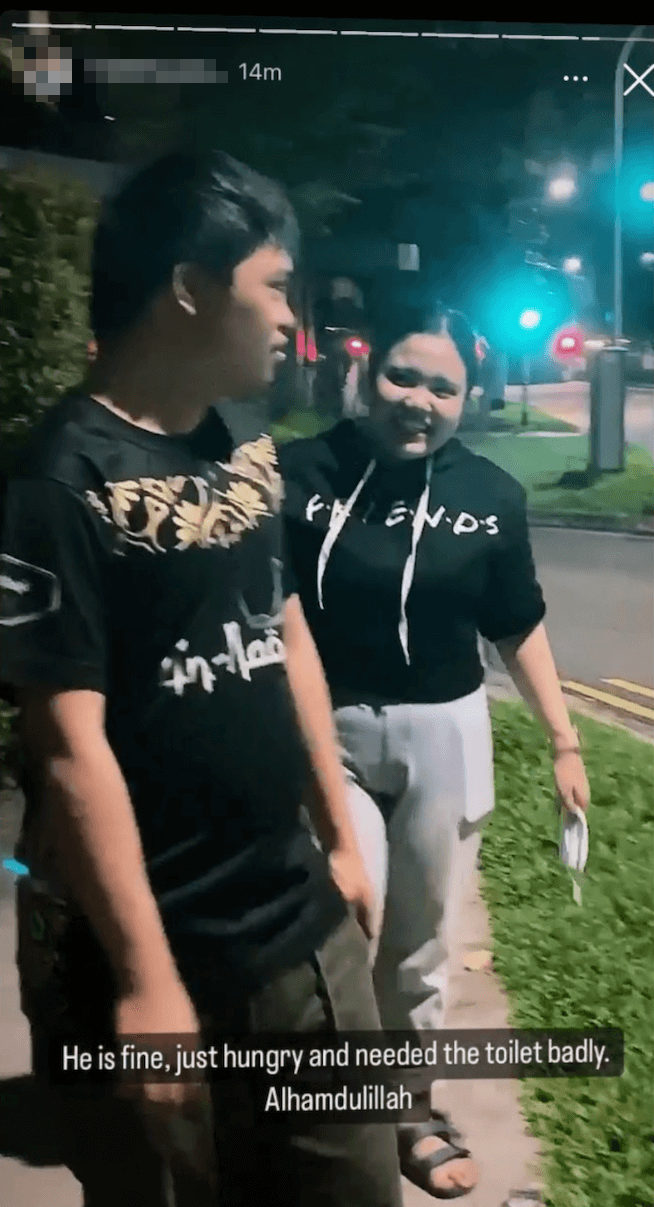 According to Ms Yasmin’s aunt and uncle, who also went to Yishun to look for Khidir, they encountered several Good Samaritans along the way, showing how many people stepped up to help.

Ms Yasmin also posted screenshots of conversations she had with strangers, some of whom travelled all the way from Bukit Panjang to join the search. 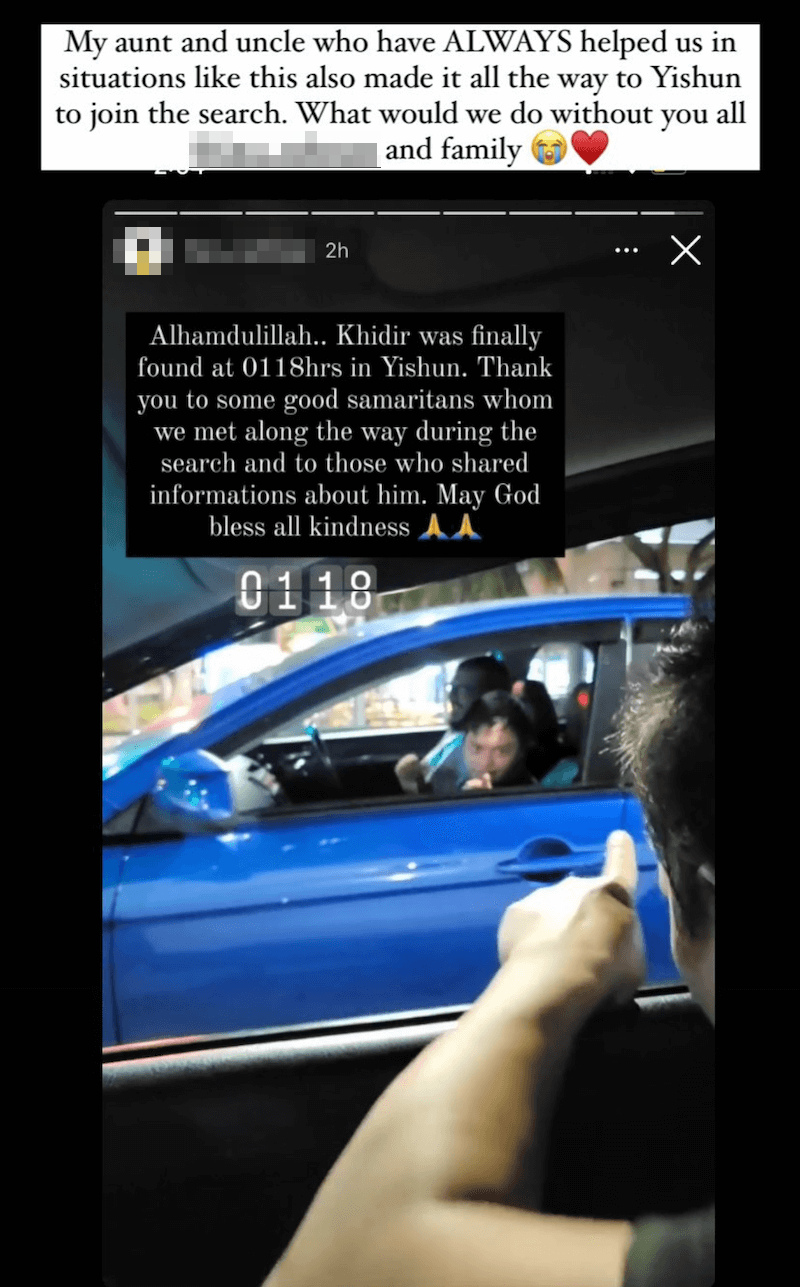 Not the first time teen had gone missing

She wrote that her family started to worry after he did not come home an hour after going out to buy a drink at Tampines.

Apparently, Khidir had a tendency to hop on and off buses and take trains even without his EZ-Link card. 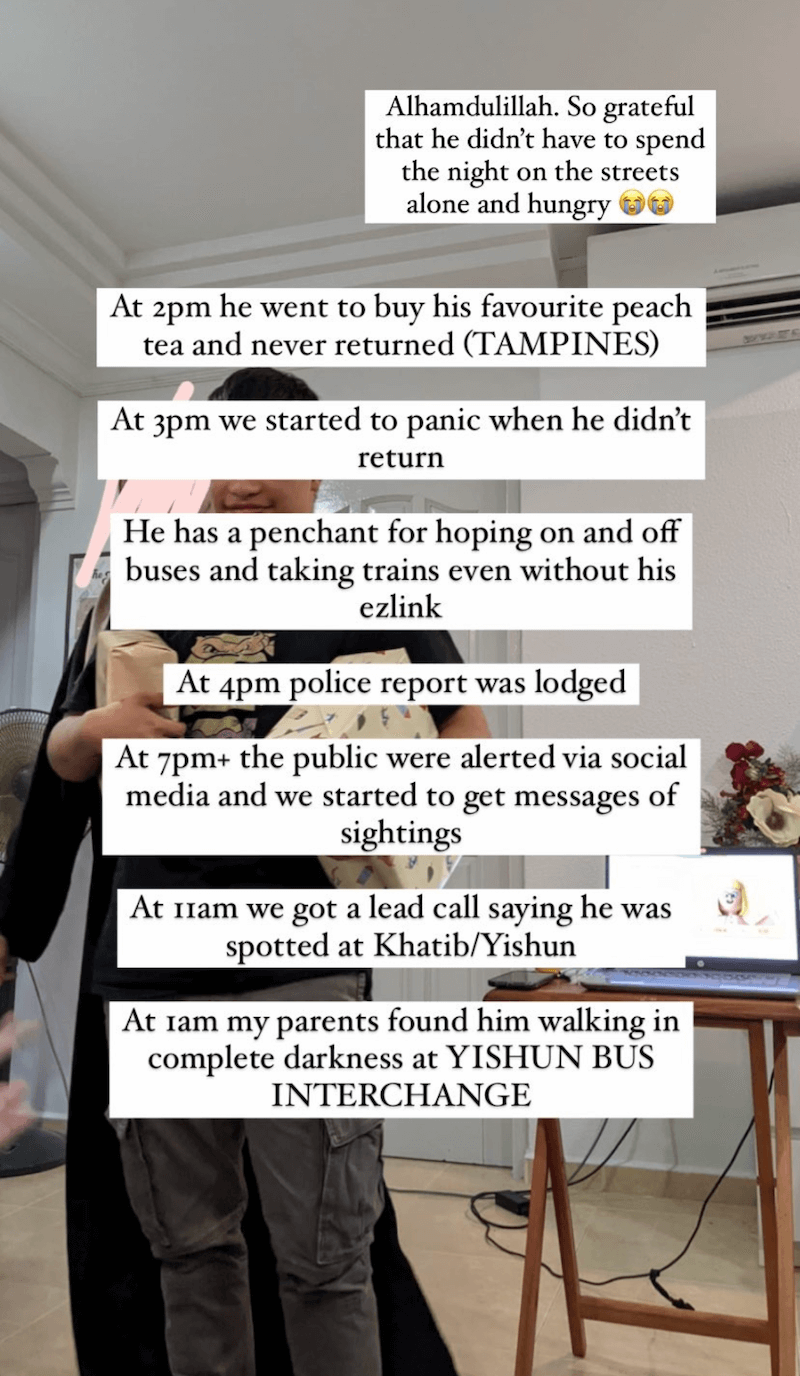 The family lodged a police report at 4pm, and at 7pm, they began receiving messages of sightings after posting about the case on social media.

At 11pm, they got a call from someone who had spotted Khidir at around the Khatib and Yishun area. His parents found him at Yishun Bus Interchange at around 1am.

This wasn’t the only time Khidir had gone missing.

The first incident happened just a few months ago in March when he “[sneakily] hopped on a bus” to Changi Airport. Thankfully, his family managed to find him after four hours. After this ordeal, Khidir’s family attached a location-tracking AirTag to his EZ-Link card lanyard, but he doesn’t always have it on him.

Ms Yasmin added that her brother has attempted “many escapades” since then, ending up at various locations such as MacPherson.

It’ll be difficult to ground him too because he’s a growing boy who, like everyone else[,] doesn’t want to be couped up at home during the holidays. Moving forward, Ms Yasmin and her family will try to make sure that Khidir’s phone is always charged and that he has his AirTag on him as much as possible.

It’s always worrying when a loved one goes missing, especially when they have special needs and may not be able to fend for themselves.

This incident also proved that there are many kind-hearted people in Singapore who are willing to go out of their way to help a stranger. As Ms Yasmin noted, “Faith in humanity restored.”