As exciting as the Chinese New Year celebrations are, those of us who are still single by the time 1 Feb rolls around will have one thing to dread — a game of 21 questions by persistent relatives.

Well, not all heroes wear capes, and while Singaporean TikToker @_wayneee_ doesn’t don one, he might just be the hero you need this festive season if you rent him as a boyfriend.

The TikToker in question, whose real name is Wayne Chia, posted a video on 21 Jan advertising his CNY boyfriend-for-hire services, which at the time of writing, has already racked up nearly 190,000 views.

In the TikTok video, viewers can read the extensive list of services that Wayne provides as the man himself walks around casually in front of the camera, looking dapper in a casual maroon suit. 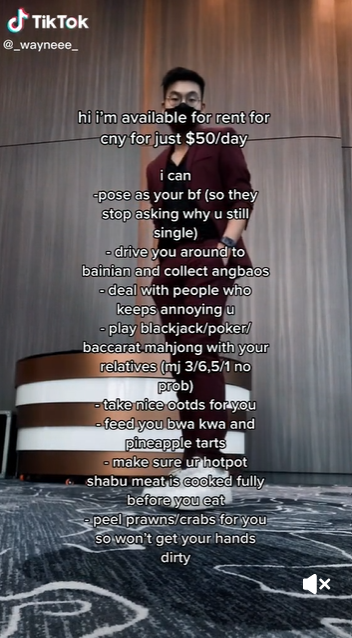 We don’t know how high your expectations are, but he seems like the complete package to us.

While the comments are a mixed bag, Wayne told MS News that he feels “heartened and thankful” to see supportive replies that help to “soften the blow” of negative comments.

This user must be looking to save some money for angbaos, as she’s already asking Wayne for a discount.

Wayne may have to extend his services beyond the CNY period if users like this one are keen to engage him for other festivities.

This guy has a point — maybe Wayne needs to up his fees a little?

Depending on how generous the relatives Wayne meets are, perhaps this is how he plans to break even or make a profit.

Boyfriend rental ad an attempt to join a TikTok trend

With all this fuss being kicked up, one might wonder if Wayne has actually received any formal requests to be someone’s boyfriend-for-hire.

Well, the jig is up, as Wayne revealed to MS News that if there are any requests, he “would turn them down because it’s a joke”.

Despite the video’s caption ironically being “im srs” (I’m serious), the TikToker is anything but, as he stated he was taking part in a trend that features guys and girls alike showing what services they can provide as rental boyfriends or girlfriends.

On whether his services have had any takers so far, Wayne said that while “no one has formally requested it”, most of the interest has been indicated via the comments. 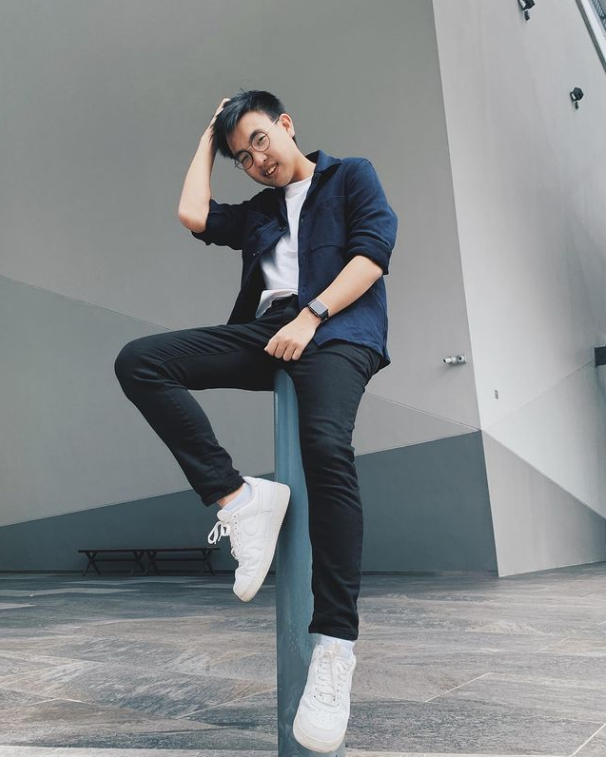 Indeed, quite a number of users have expressed interest and commented on Wayne’s wholesome good looks.

All in good fun

While some of us may be disappointed that Wayne’s video turned out to be a playful ruse, we can’t deny that a rental partner is quite an amusing concept.

Though not everyone may agree, we hope that ideas like these entertain viewers especially in such difficult times like the present. After all, it’s all in good fun.

Would you get a boyfriend or girlfriend for hire if someone offered their services? Let us know in the comments!

Featured image adapted from @_wayneee_ on TikTok and @waynechia.jpeg on Instagram.

This M’sian Resort Lets You Overnight In A Private Jet, Live The High Life In Luxury Suites