Ukraine Situation Shows That S’pore Can’t Rely On Others To Protect Us: PM Lee 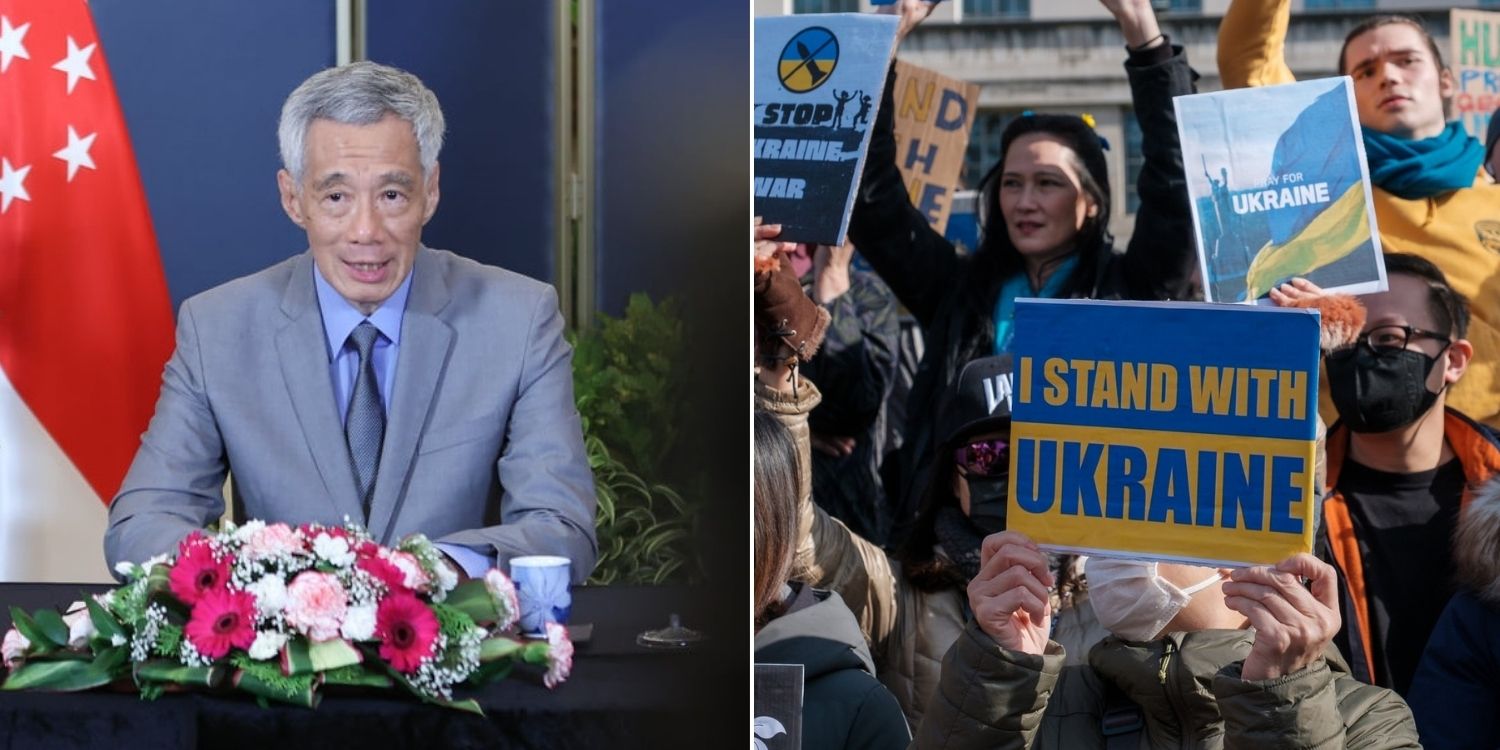 Ukraine's sovereignty, independence and territorial integrity must be respected, he said.

Since the crisis in Ukraine started unfolding last week, Singaporeans have watched on with grave concern.

Though the action may be taking place far away from us, it doesn’t mean it won’t affect us in any way.

In fact, Prime Minister Lee Hsien Loong has said that the situation holds an important lesson for Singapore. 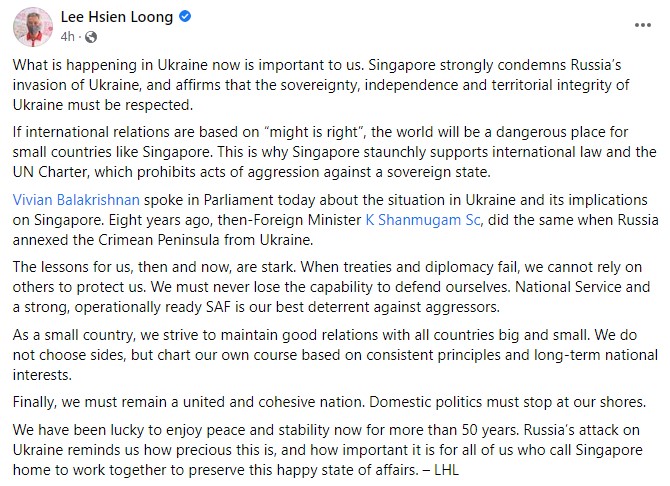 He added that we can’t rely upon others to protect us, and mustn’t lose the capability to defend ourselves.

PM Lee made his first online comments about the Ukraine crisis in a Facebook post on Monday (28 Feb), saying it’s important to Singapore.

That’s because as a small country, we’ll be in danger if “might is right” becomes accepted in international relations.

Thus, we support the prevailing international law and the United Nations Charter, where acts of aggression against a sovereign state are prohibited. 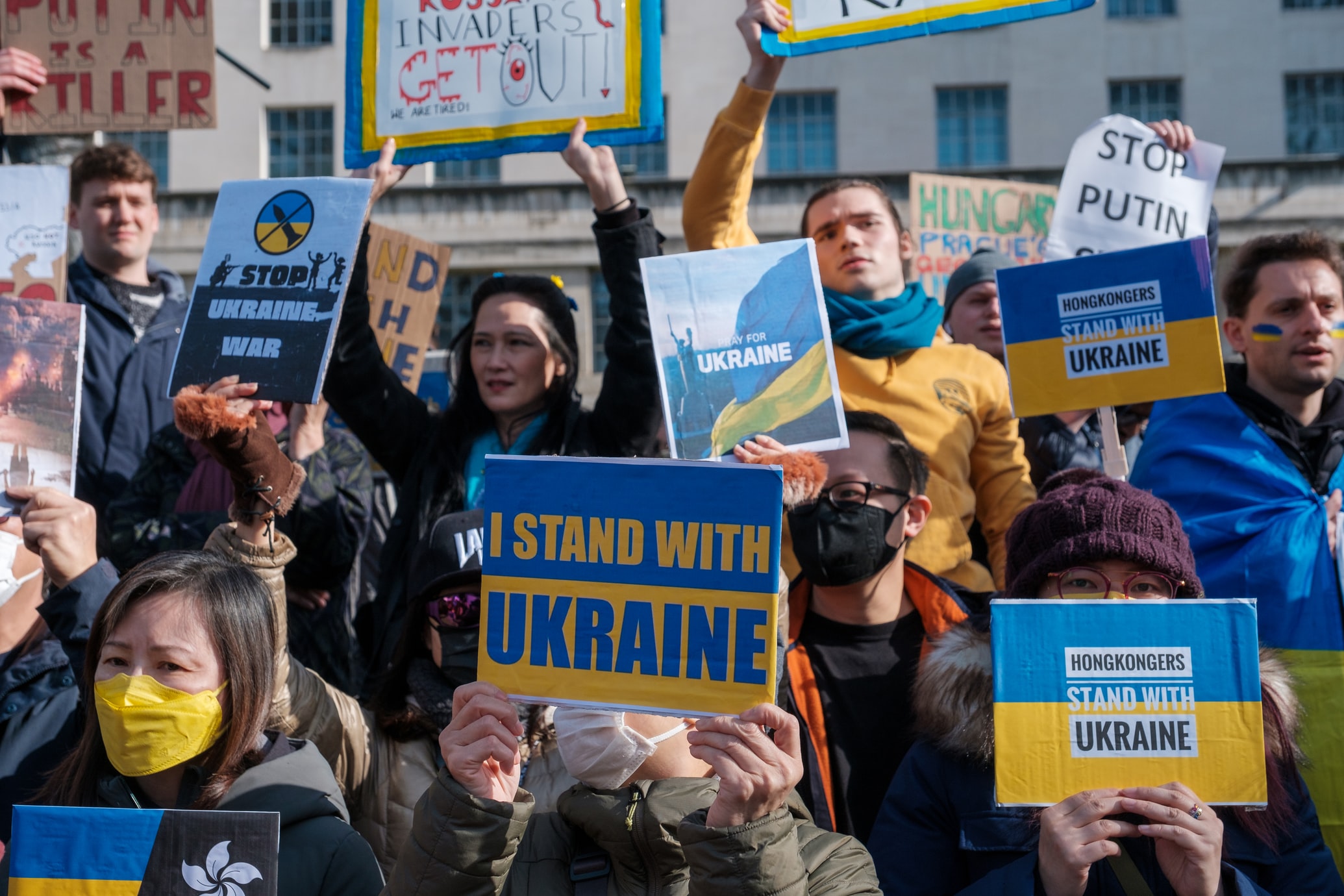 To that end, PM Lee stressed that Ukraine’s sovereignty, independence and territorial integrity must be respected.

His clear message of condemnation comes after the Ministry of Foreign Affairs (MFA) said the same thing in a statement last Thursday (24 Feb).

PM Lee also said there are some lessons that Singapore can learn from the Ukraine situation.

Chiefly, Singapore can’t rely on others to help us if there’s a conflict here.

Instead, Singapore must always have the capability to defend ourselves – with national service and the Singapore Armed Forces (SAF).

The PM said that a strong, operationally ready defence force is “our best deterrent against aggressors”. This is especially when treaties and diplomacy fail.

Secondly, PM Lee also said Singapore must be on good terms with all countries, whether they’re big or small.

That means not taking sides but charting “our own course”,  based on consistent principles and long-term national interests.

One of these interests is for Singaporeans to be “united and cohesive”, no matter what our domestic politics is like.

He pointed out that Singapore’s 56 years of peace and stability is precious, and we need to work together to preserve it.

If we need a reminder on to how lucky we are, we just have to look at Russia’s invasion of Ukraine.

Singapore will impose sanctions on Russia

In Parliament earlier on Monday (28 Feb), Foreign Minister Vivian Balakrishnan also spoke on the Ukraine conflict, saying it was “an existential issue” for Singapore.

It shows how quickly a vulnerable country can be overrun, and that’s why we’re taking a stand against it, he added.

Besides condemnation, Singapore’s taking concrete steps to oppose the invasion by imposing sanctions on Russia.

For example, we’ll be imposing export controls on items that could be used directly as weapons in Ukraine to inflict harm or subjugate the Ukrainians.

These moves are in line with those of other nations condemning the invasion, including blocking Russia’s access to the SWIFT global payment system.

Worryingly, at least 9 Singaporeans are still in Ukraine even as the conflict rages, Minister Balakrishnan said.

While 8 of them are in touch with the MFA, they have yet to contact the remaining person.

MFA will help them as much as they can, and they’re currently exploring options for these Singaporeans to leave Ukraine. 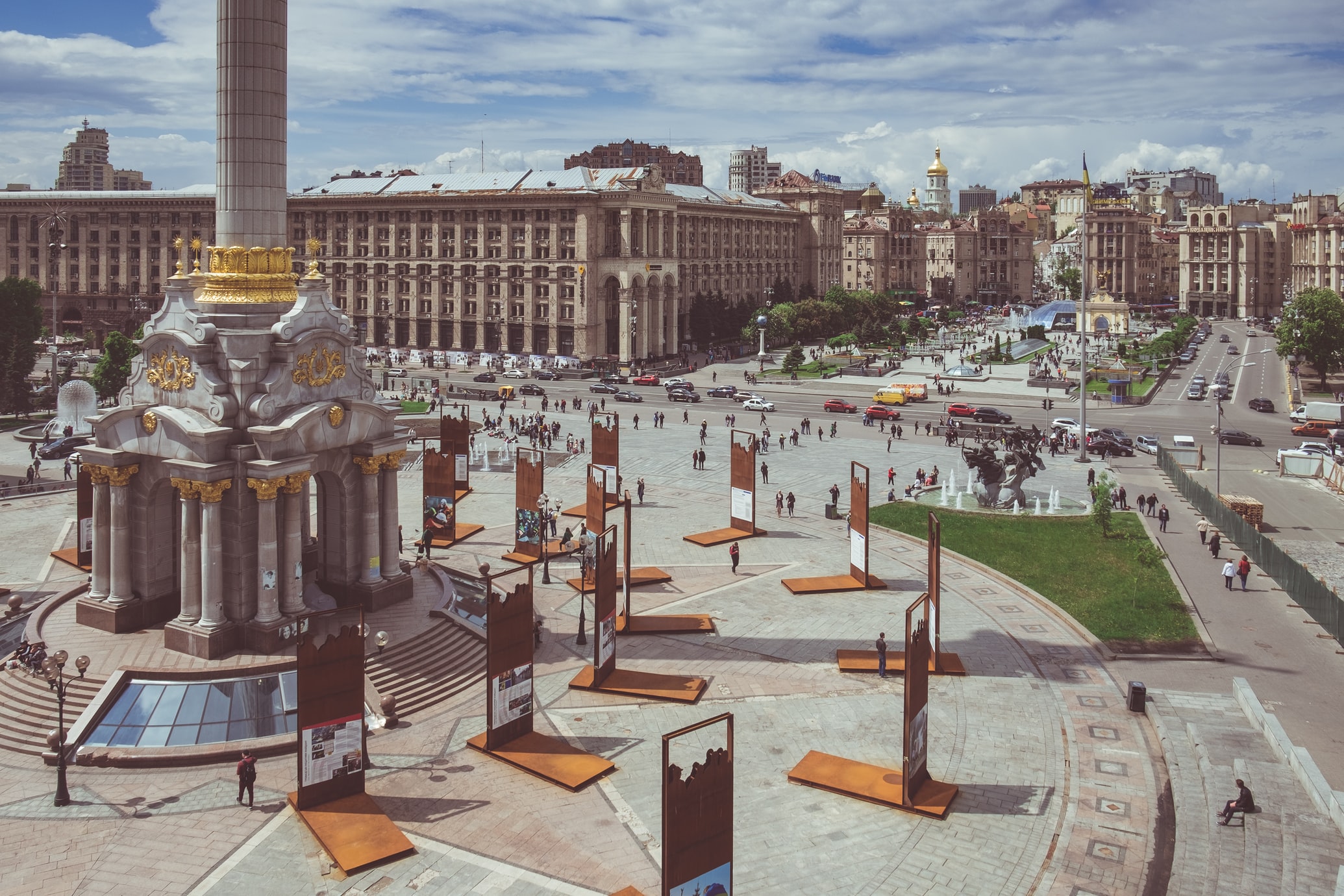 On 14 Feb, the MFA had advised Singaporeans in the country to leave while possible and contact them for assistance.

Events are relevant to Singapore

It’s timely that Singapore has joined the chorus of nations condemning the invasion of Ukraine.

While it’s a matter of course that we stand up for what’s right, what’s happening has much relevance to us as well.

After all, Singapore knows what it’s like to experience an invasion, and the threat of it happening again is ever-present.

Hopefully, the situation in Ukraine calms down soon. Until then, Singaporeans should realise the importance of having a good defence and diplomacy.