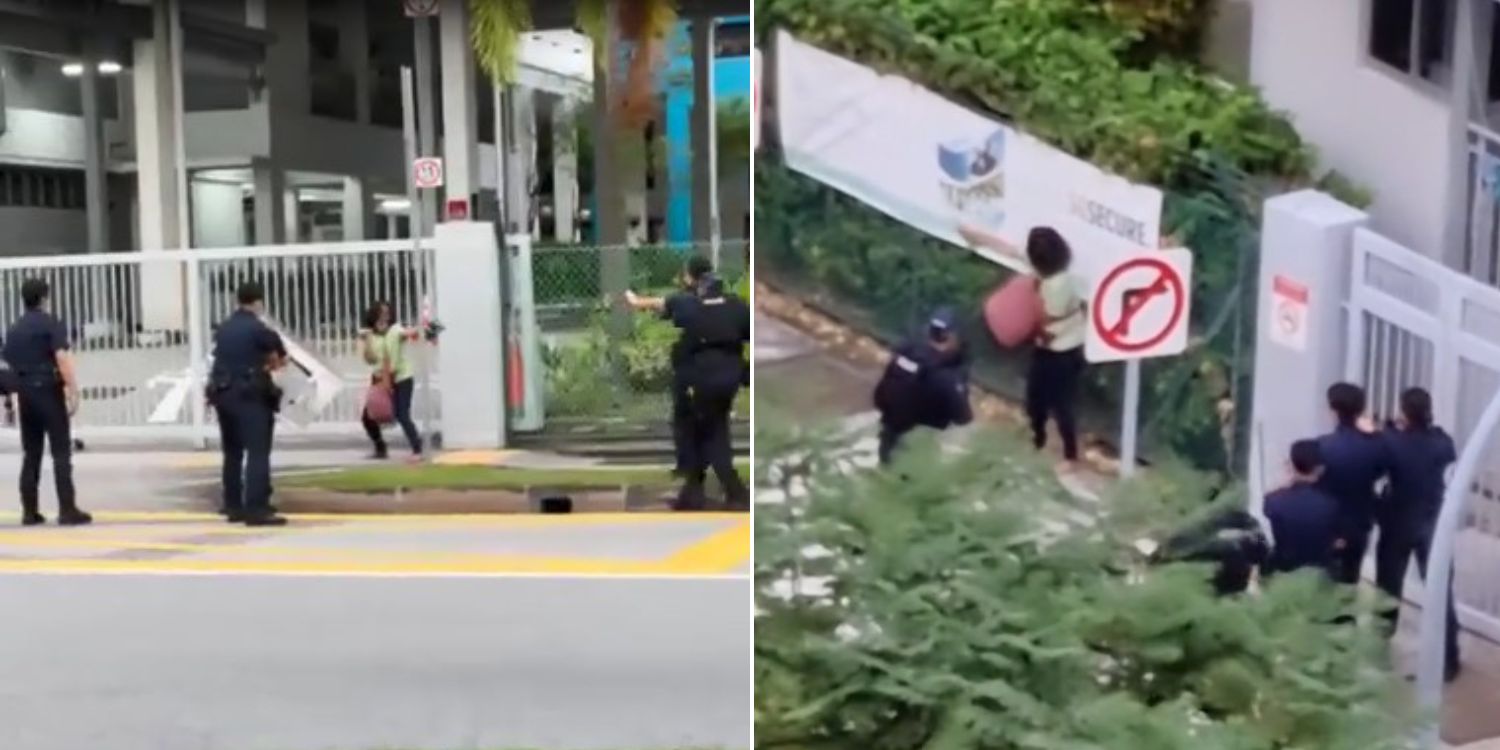 She stabbed herself in the abdomen, the police said.

A woman was seen in videos appearing to wave a knife at police officers in Tampines on Monday (19 Sep) evening.

She was also heard yelling at the police outside the gates of St Hilda’s Secondary School. 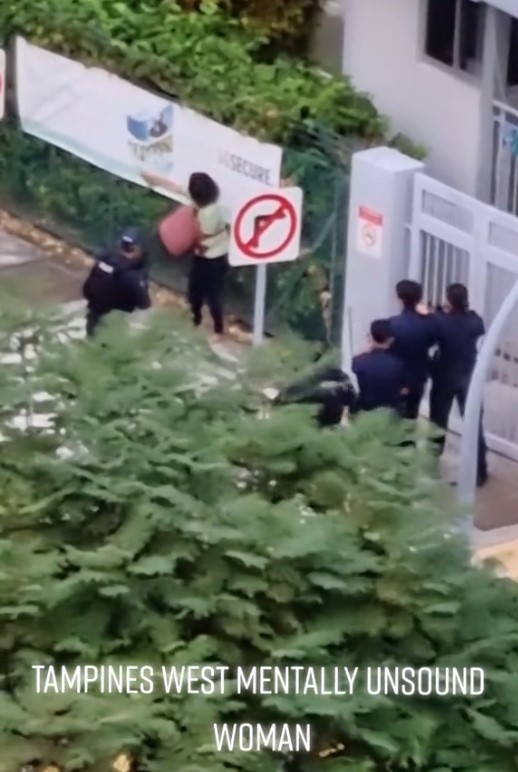 The woman was eventually subdued by the police and sent to hospital.

In a video posted on various social media sites, including the Our Singapore Facebook page, a woman in a light green top and black pants can be seen surrounded by several police officers.

Her shirt appeared to have a large dark red stain on her stomach, and she was holding at least one object in her hands.

She was also yelling something unintelligible at the officers.

As the officers tell her to “drop the knife”, she seems to get increasingly agitated, walking from one end of the gate to the other and waving the object at them. 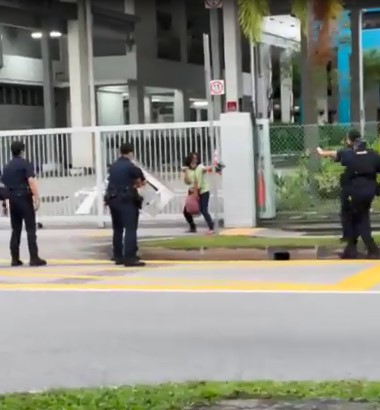 Woman shouts at police to get back

In another video uploaded on TikTok, the woman can be seen standing outside the school fence surrounded by at least 10 police officers.

She has what appears to be a knife in her right hand, and she’s waving it at the officers and shouting at them to “get back”.

The officers retreat slightly, though some of them seem to be carrying guns and a taser. 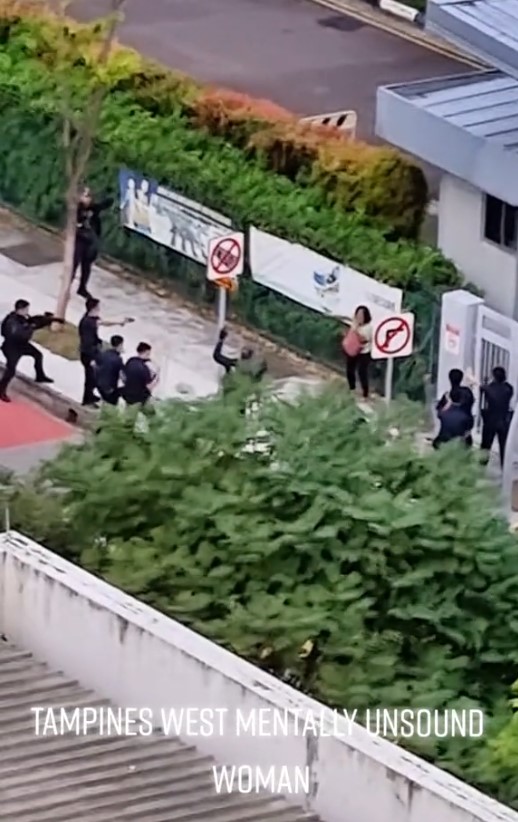 One officer raises his palm and engages with the woman, possibly trying to calm her down.

Later, the woman appears to try to make a call using her handphone in her left hand.

She then drops something on the ground, prompting a police officer to advance quickly and kick her away. 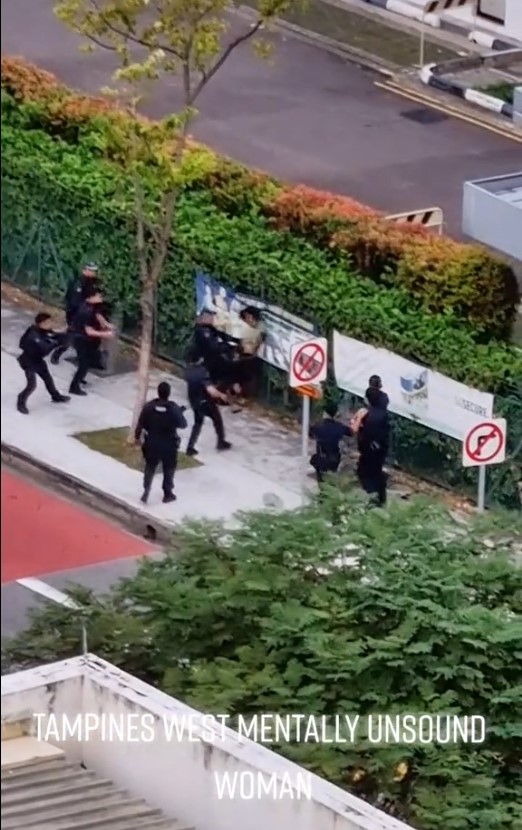 The group of officers then subdue the woman, who falls to the ground. 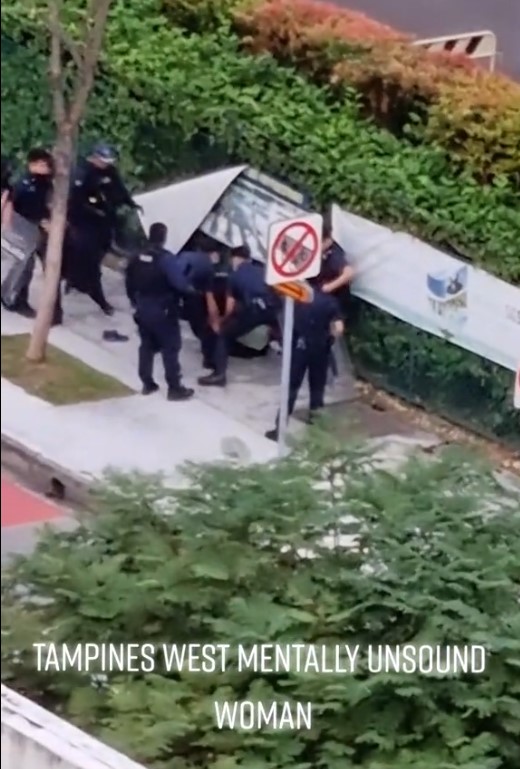 The police received a call for assistance at about 6.30pm on Monday (19 Sep), Channel NewsAsia (CNA) quoted them as saying.

They were dispatched to a location near Block 840 Tampines Street 82, opposite St Hilda’s Secondary School.

When they arrived, the woman refused to follow their instructions. Worse still, she stabbed herself in the abdomen.

One of the officers had to use a taser to stop her from injuring herself further, they said.

The woman was arrested for possession of an offensive weapon, the police added.

The 53-year-old was also detained under the Mental Health (Care and Treatment) Act. Additionally, she’s suspected of drug-related offences.

She was taken to the hospital conscious and in stable condition.

Investigations into the case are currently ongoing.

When CNA arrived at the scene at 7pm, they saw the woman screaming. They also saw at least two police cars and at least 10 officers.

When an ambulance arrived, paramedics tried to calm her down.

She was moved onto a stretcher at about 7.40pm and taken away.

An eyewitness told CNA that the whole incident lasted about 15 minutes, and claimed to overhear the woman saying that she wanted to call her husband.

Latest in spate of similar incidents

The incident is the latest in a recent spate of cases relating to sharp objects in Singapore.

On 14 Mar, three separate incidents were reported: a man with a sword in Buangkok, a razor blade attack in Queenstown and a man who allegedly threw a knife at police in Bukit Batok.

On 23 Mar, a knife-wielding man was shot dead in Bendeemer after he charged at them.

In May, another man who charged at the police with a knife in Boon Lay was tasered and arrested.

In June, a young man was slashed multiple times while drinking at a coffee shop in Geylang, and a man allegedly attacked two people with a knife in Yishun.

On 3 Aug, a teen allegedly slashed a man with a knife in Choa Chu Kang after a booze-fuelled argument.

On 18 Sep, a man allegedly attacked another man with a pen knife on Beach Road. They reportedly didn’t know each other.

Featured image adapted from Our Singapore on Facebook and miseneri on TikTok.