Ex-NP Students Share Stories Of Orientation Hazing, Urge For Those Responsible To Be Investigated 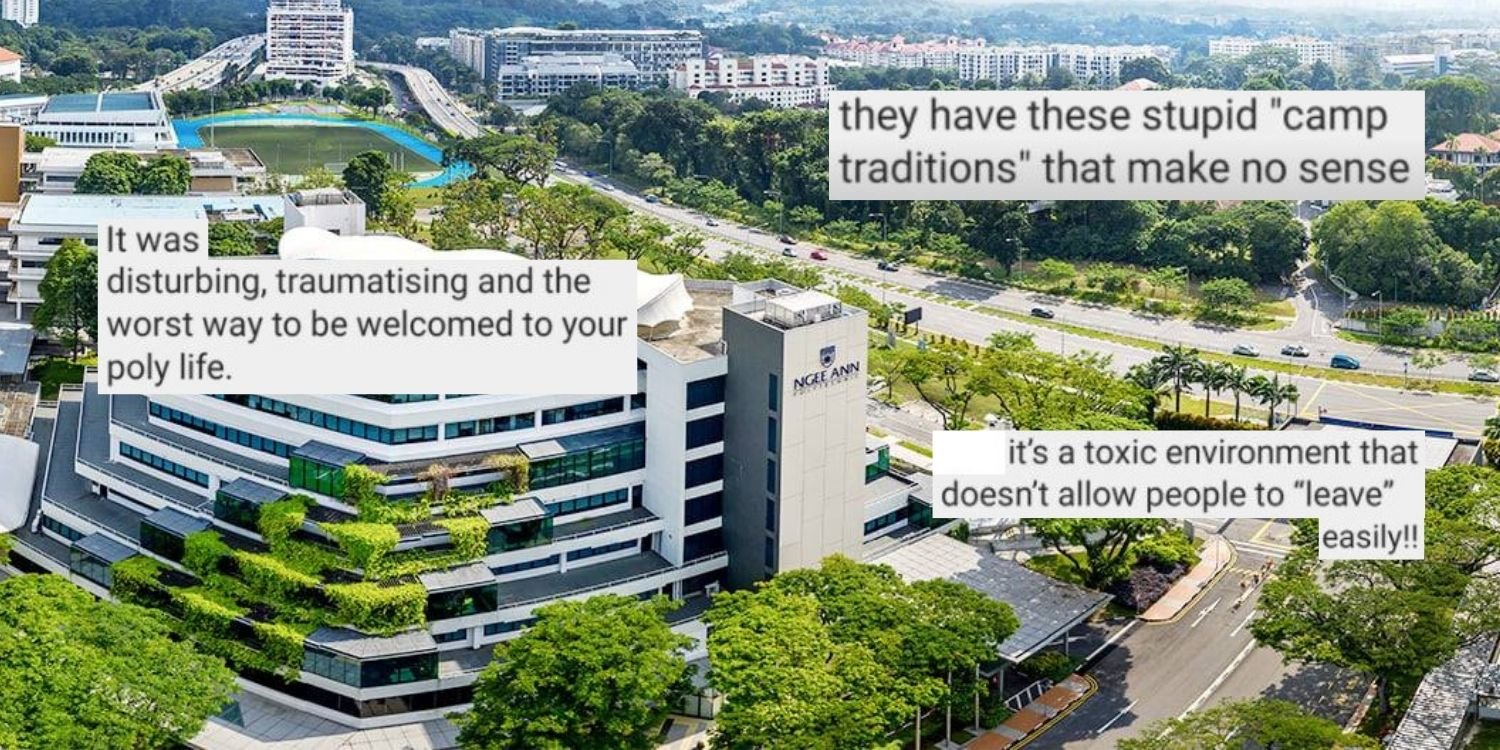 Some defended NP, saying not all its groups are like that.

When young people grow up and enter a new school, they’ll inevitably make many new friends.

It’s not surprising that with many young people getting to know one another, some mischief will occur.

However, many Singaporeans were shocked to find out, thanks to a viral video, that it includes some students being urinated on.

The male students in the video were from Ngee Ann Polytechnic (NP), and they seemed to be taking part in some sort of hazing ritual.

Since it went viral, other former poly students have come forward with stories of questionable activities that took place at NP’s orientation camps and other outings.

Many netizens have had similar experiences 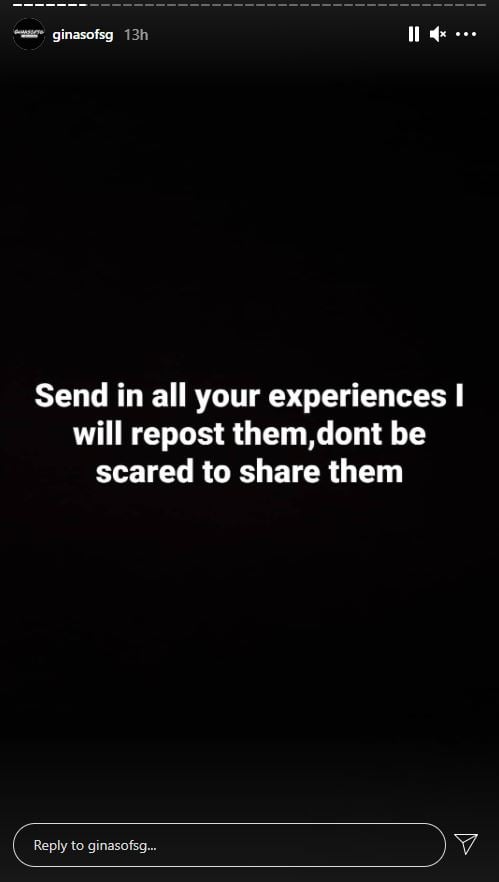 They apparently received a flood of DMs, mostly from people saying they were former NP students. Most of them wanted to remain anonymous.

Their stories alleged that what the whole Internet saw in that video was just the tip of the iceberg.

In fact, such rituals have been going on for awhile, said one message. 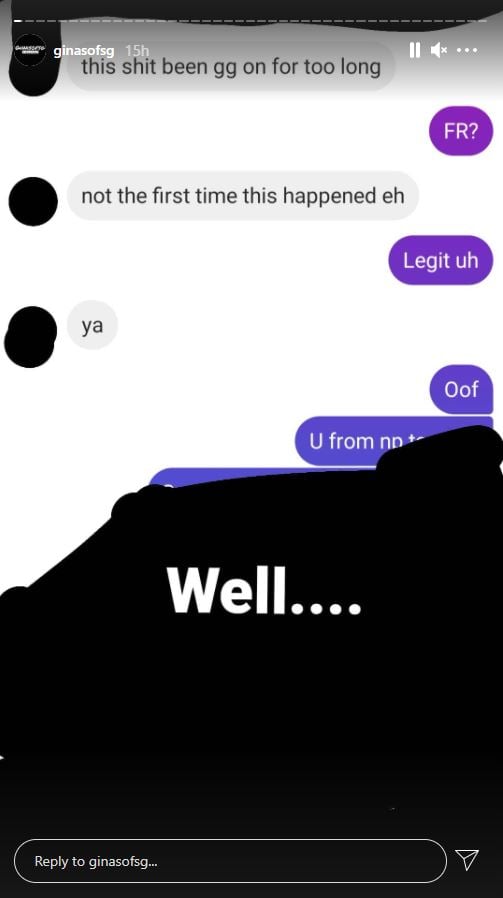 Read on for some examples.

DISCLAIMER: The activities described in the messages might be disturbing to some, so reader discretion is advised.

Contributors who say they’ve been to camps and outings organised by the NP Students’ Union (NPSU) claim that some of the “traditions” that go on there might churn the stomach.

For example, an ex-NP student said “extra ingredients” were added into drinks served to campers, and were stirred in using hands and feet. 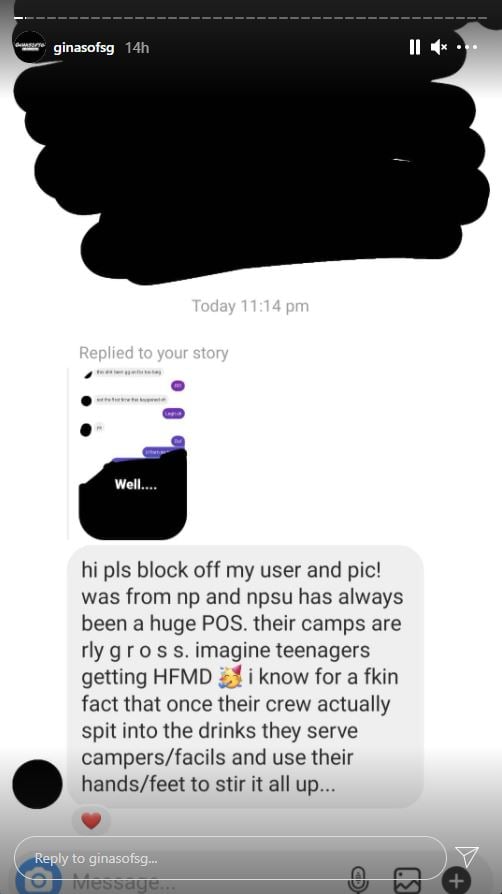 Girls weren’t spared either, said another netizen, who claimed that a senior asked them to “volunteer” to have eggs thrown at them. She claimed the eggs where thown from 3 stories up and they were supposed to catch them with their mouths. 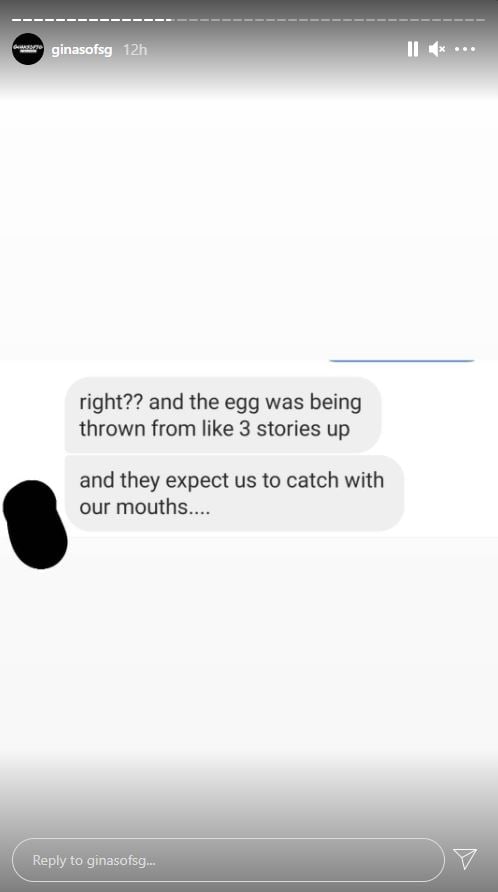 Another netizen alleged that food waste and dirty water was poured over freshmen (i.e. 1st-year students).

They were also forced to stay awake at night or be doodled on with markers. Other students were allegedly made to crawl on wet toilet floors and retrieve “marbles” from sinks.

This ex-student confirmed the “food waste and dirty water” story above, and said a watermelon was taped to a friend’s head for hours. 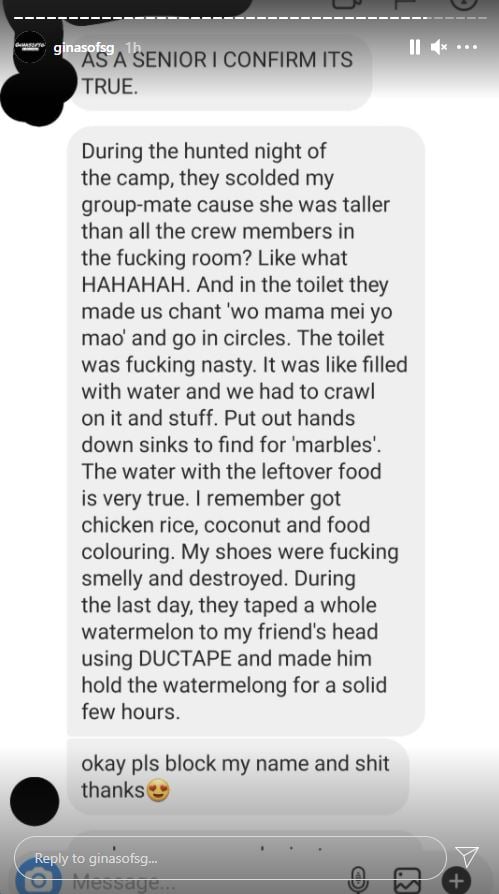 Other activities were more salacious

These were the activities that were still PG or NC16 rated.

Other activities were more salacious, bordering on an R21 rating.

For example, the naked beach runs and sexual harassment alleged by this contributor. 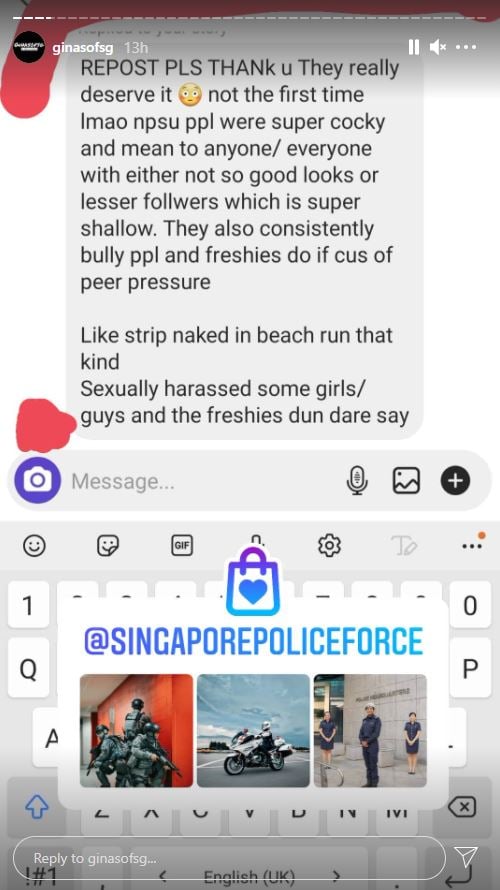 Another outing in Sentosa apparently got out of hand when girls in white were forced to get into the water despite their protests.

Freshmen were also made to lick used, wet socks.

Additionally, freshmen forced to drink alcohol were thrown together on a bed after passing out, irrespective of gender. 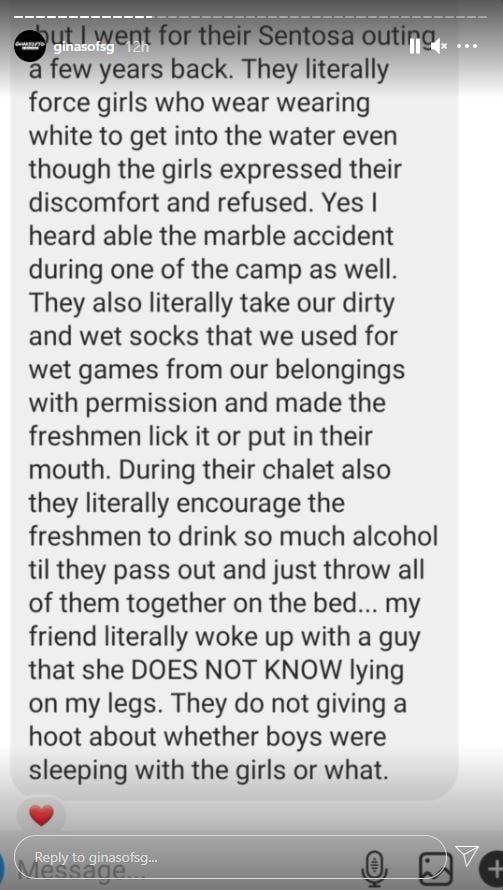 According to a message from an ex-student, he was subjected to verbal abuse from group leaders (GLs).

They were also forced to shower naked next to one another while the GLs watched from behind, saying it’s a “bonding session”. Some guys had their underwear ripped out and torn apart during their birthdays. 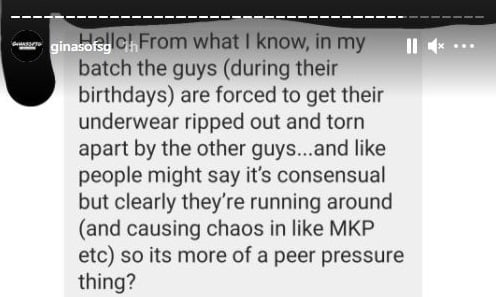 Other activities included squeezing sensitive body parts of male students until they were bleeding. 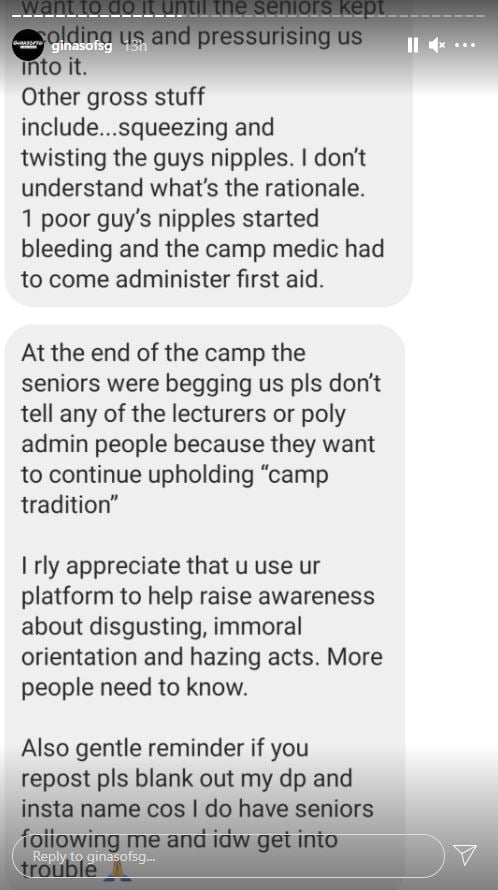 One of the previous contributors confirmed all the stories, saying he’s either been through them or heard about them, including the group showers. 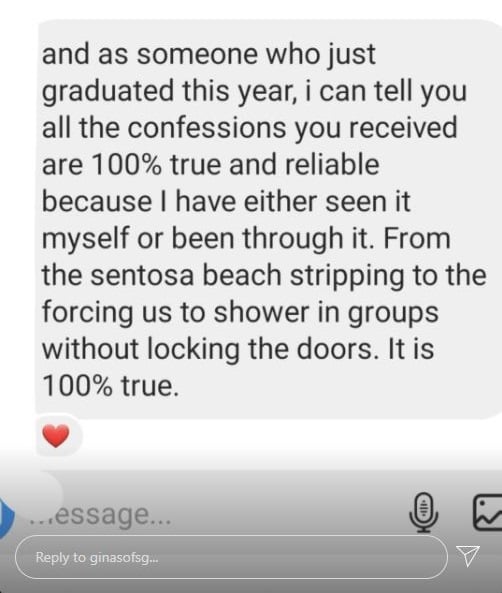 Ex-student traumatised, said he didn’t want to do it

While one of the guys who got peed on in the viral video has said it was consensual, an ex-student who did similar things said he didn’t want to do it.

However, he said he and most of his camp-mates were “forced into it by the seniors”. 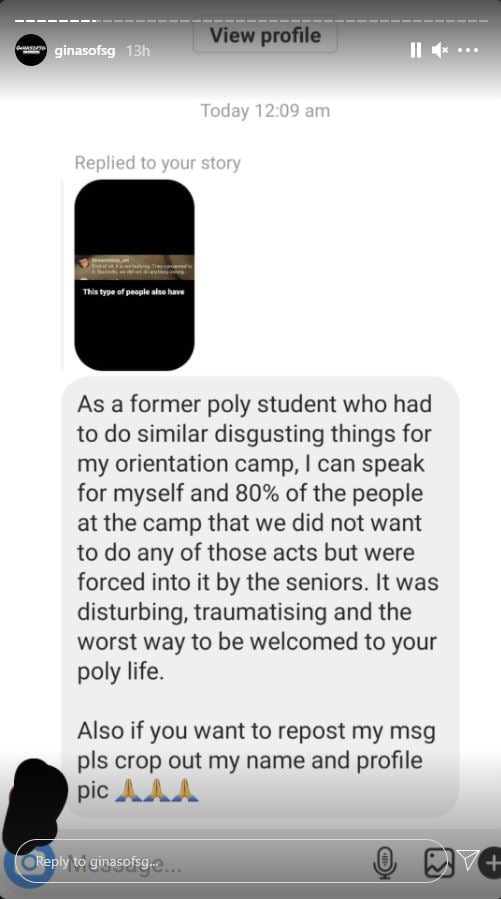 He also called it “disturbing” and “traumatising”.

Another netizen said he wouldn’t want to go to poly after seeing that video. 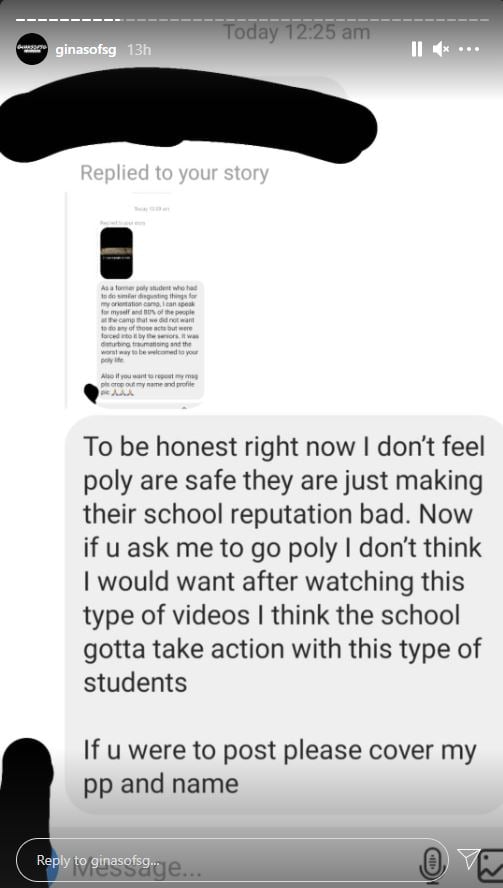 Students do it out of peer pressure?

Why do students allow themselves to be subjected to these “traditions”?

After all, after watching the video, many have said they’ll never allow someone to do that to them.

A former NPSU camper said they were afraid of getting “boycotted” if they didn’t do it. 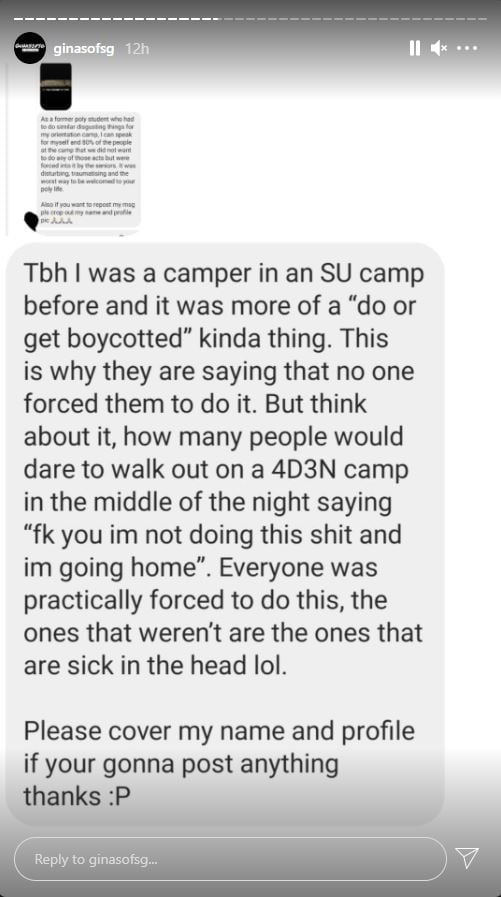 Thus, as it’s a case of peer pressure, they can’t say they weren’t forced into doing it.

Agreeing that it’s due to peer pressure, another netizen made the point that it’s not easy for people to just walk away if they don’t like what’s going on. 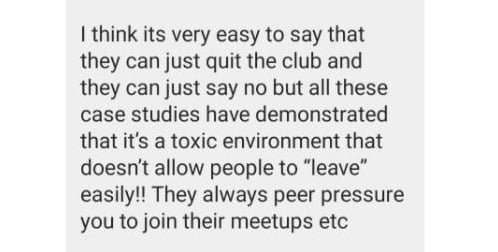 Illustrating that point, another ex-student whose classmate was a GL said she was “brainwashed”.

Many join because they’re “young and clueless”, she added. 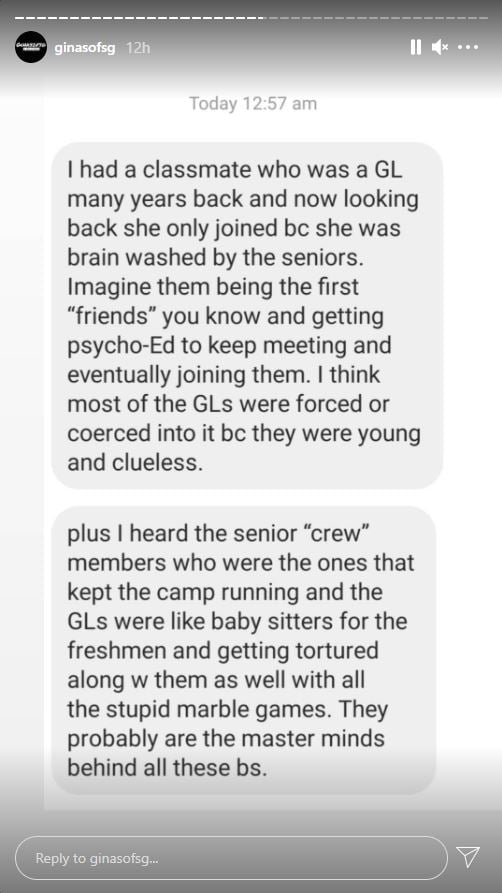 She said even the GLs were “tortured” along with the freshmen by the seniors.

One message alleged that some GLs stole from other clubrooms by turning off the power to be electric doors. 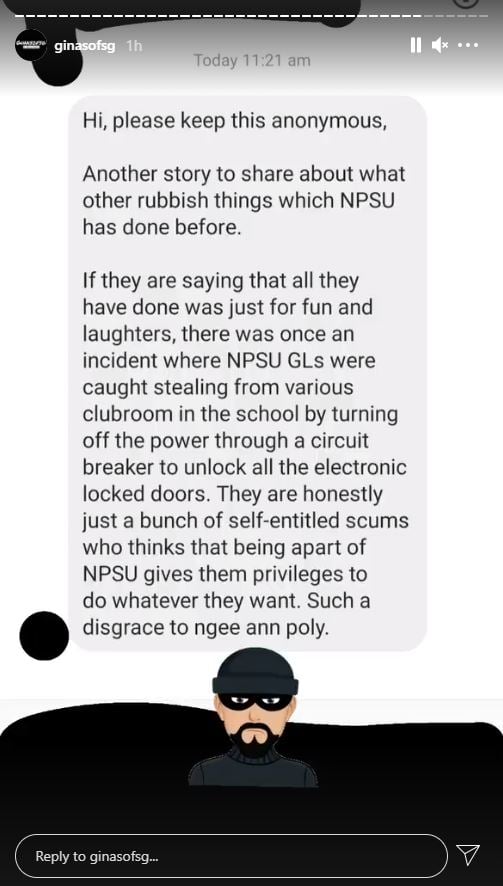 One reason for the alleged act could be that it’s “well known”, according to another netizen, that GLs are forced to sell stuff or fork out their own money for camp funds, which are then spent on partying.

He or she also alleged physical and verbal harassment during the camps. 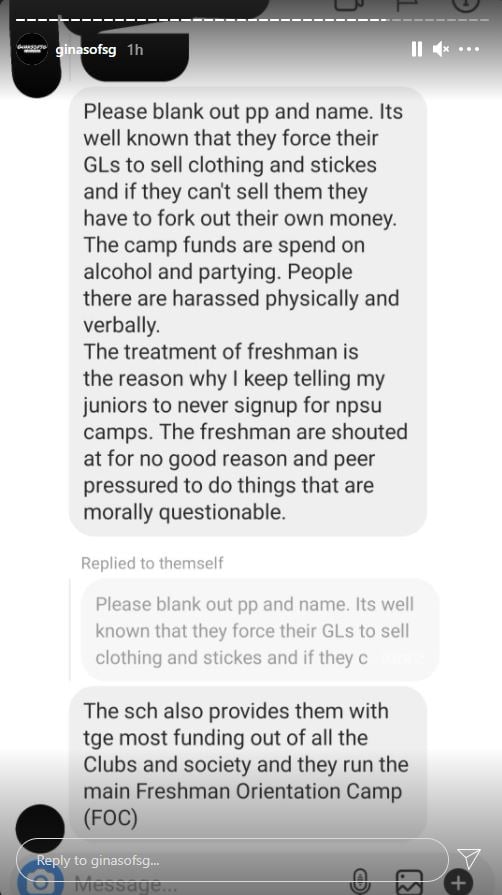 Does this happen only at NP?

Students from Nanyang Poly (NYP) also related their experiences with camps, which were much milder.

This prompted questions as to whether only NP had such “traditions”. 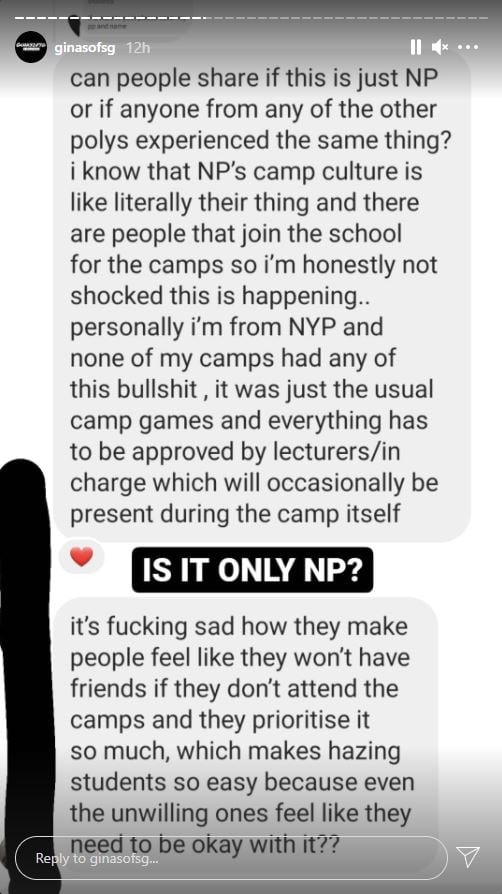 Another NYP student said he/she was shocked at the NP video as NYP orientation was just a dance. 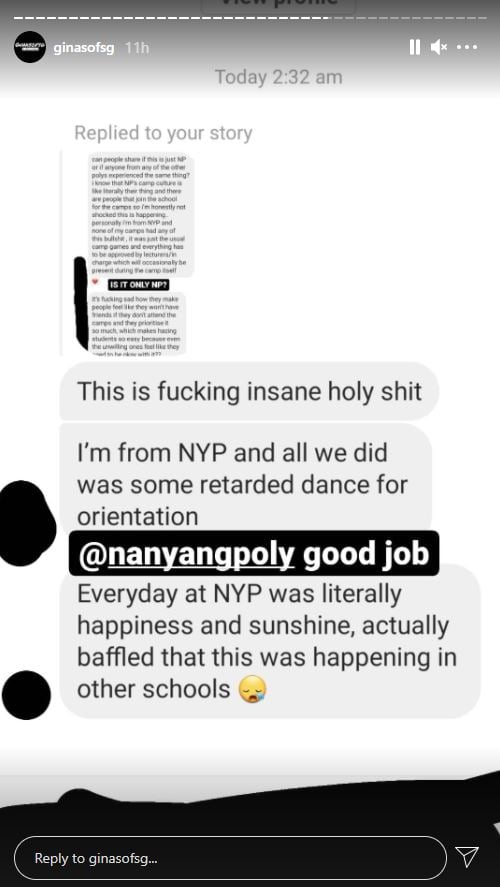 However, an ex-student from Singapore Poly (SP) said he had similar negative experiences, including pinching of guys’ nipples, which he called “disgusting”. 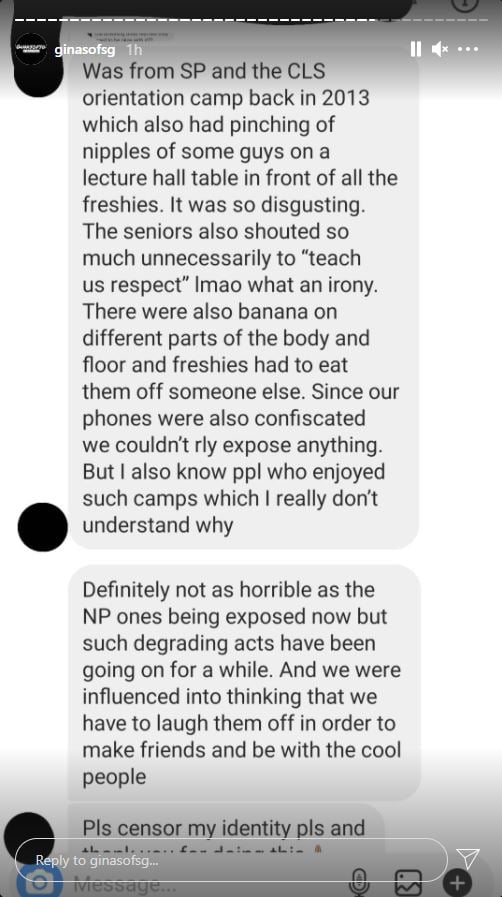 One netizen claimed that one reason why this happens at NP is that its teachers don’t have adequate oversight of the NPSU’s camp planning. 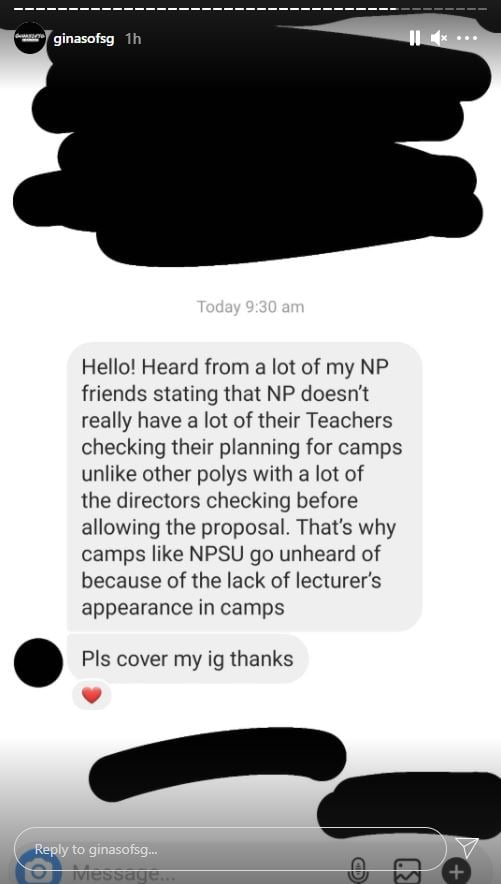 Another contributor questioned how schools could allow such behaviour to go on under their noses.

Instead of focusing on the victim(s), we should ask how a school-funded student body like NPSU could feel that it’s free to conduct “traditions” like these? 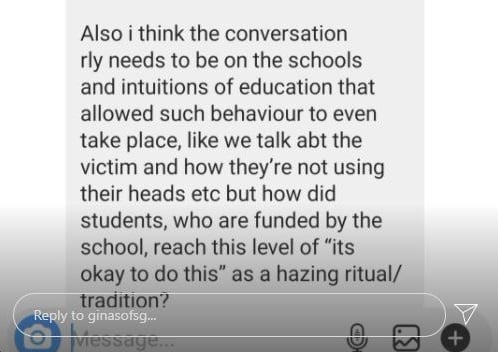 That’s especially since, like a previous comment claimed, NPSU has the most funding out of all the clubs and societies.

Another netizen urged for NPSU to be investigated.

He/she also claimed that the video wasn’t recorded during a camp and everyone in it were seniors – which correlates with what the NP told MS News in a media release. 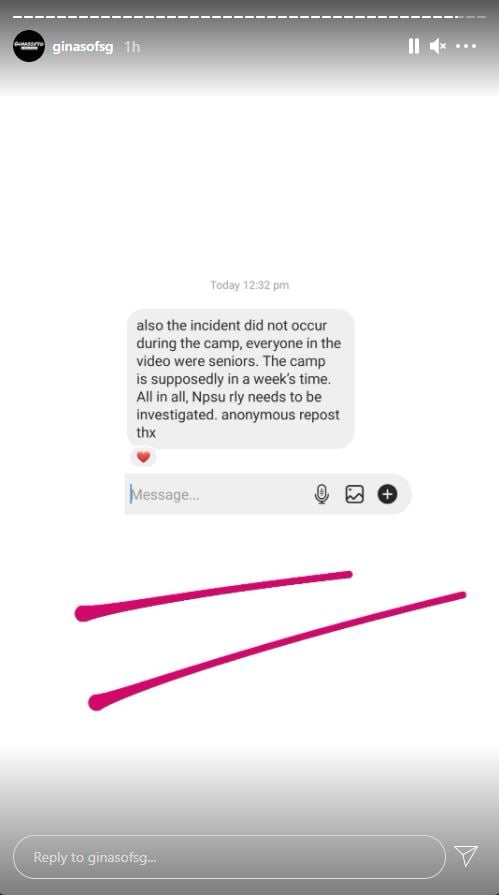 The camp is supposedly in a week’s time, he/she also claimed.

Some netizens also defended NP, saying that that not all NP camps are like that.

One put the responsibility solely on NPSU, saying it had many “toxic” characters.

The netizen also assured that there are other groups in NP that are “more wholesome”. 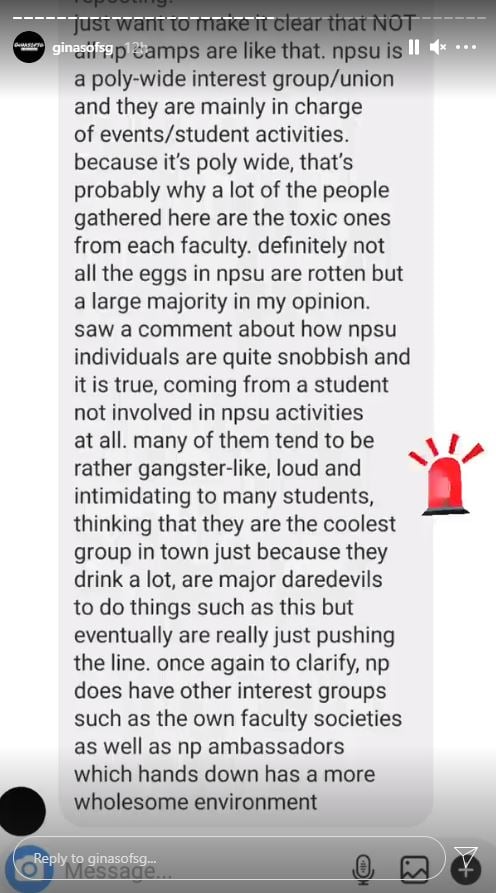 An ex-student claimed that NP’s official societies by various departments are closely monitored by the school.

He/she has been to some of their camps, and they were “memorable and wholesome”. 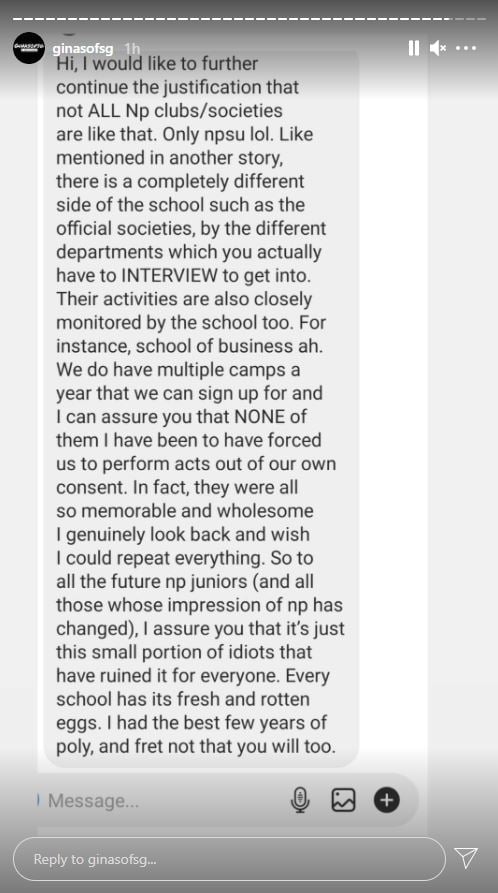 Most importantly, none of them forced people to do things they didn’t want to do.

It’s unfair that the actions of a minority of bad eggs may define NP, he/she added. 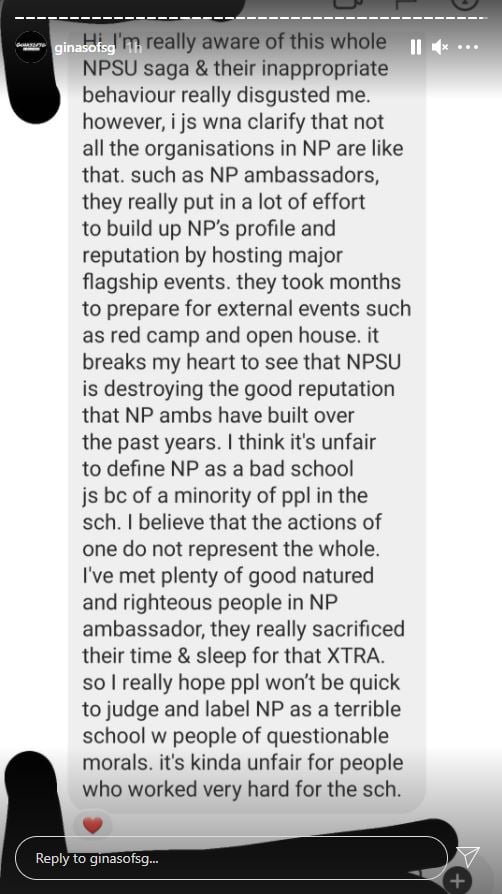 After all, many NP ambassadors are “good natured and righteous”, and they’ve worked hard to build up NP’s profile.

As such, people who want to judge the poly should take them into consideration, the student said.

If the testimonies of the numerous former students who’ve come forward are true, it does seem like there were many negative experiences at NPSU camps.

However, despite all the negative publicity, we have to remember not to tar all students there with the same brush, as we’re sure that there are positive role models among them too.

NP has told MS News that they’ve identified the boys in the video, and they were not freshmen. Neither were they taking part in orientation activities.

But that leaves many questions unanswered. For example, why did they do it?

School bullying and forcing people to do things against their will can’t be condoned in any situation, so hopefully NP will come out and further explain to Singaporeans what’s been happening.