Singapore is very much a concrete jungle, with new developments taking over nature spaces all the time.

However, to some creatures, our concrete jungle seems to be as good as a real jungle for chilling out – except for these strange humans rushing for the MRT.

Let’s try to get inside the mind of this monkey as it watched the world go by outside Lakeside MRT station.

“Why can’t they just relax?” it might have wondered at that moment.

In videos posted on Facebook by a netizen in the Complaint Singapore Facebook group, the monkey can be seen resting casually on a ledge just across a Subway outlet.

Inevitably, it attracts some attention from passers-by, including a curious boy.

“Why can’t he leave me alone?” it might have asked.

Eventually, it yawned unceremoniously, perhaps thinking, “these larger monkeys are so boring, with their rushing around.”

The monkey then made its move, jumping off the ledge and wading into the stream of humans.

As usual, the monkey may have been unperturbed, but the people it walked amongst definitely noticed it.

“Nothing to see here, just a monkey walking away from an MRT station,” it might have thought.

However, even an agile monkey can’t avoid getting blocked by people during rush hour. “Gosh, I really hate those pokey umbrellas,” it might have griped.

As usual, a human whipped out one of these flat metal thingys and held it towards him. “Why are they obsessed with these things?” it might have questioned. 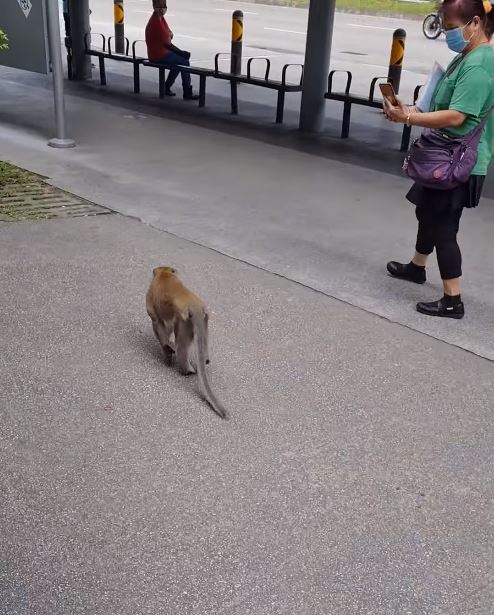 As it walked towards the bus stop, perhaps on the way back to the real jungle, it would have conceded, “perhaps the concrete jungle isn’t for me. I just want a quiet life away from the big monkeys and their metal slabs.” 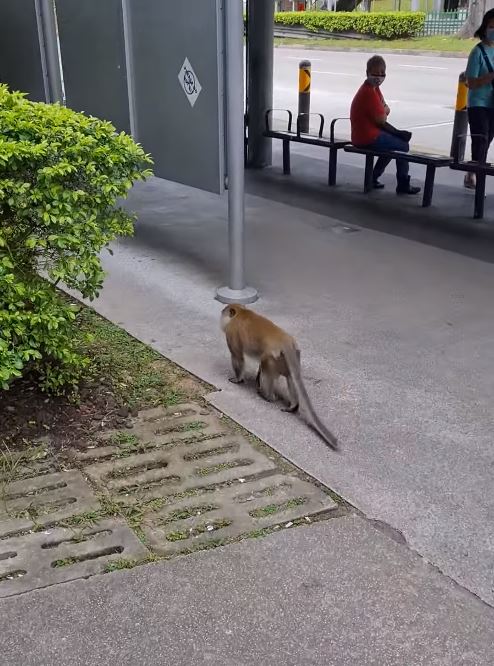 Relaxing in style in the city

The Lakeside monkey should have taken a leaf from his friend in Marina Bay – now there’s a creature who knows how to relax in style.

Or perhaps it would enjoy the heartlands better if it roamed in a pack.

Better still, there should be some enticing food to steal.

Seeing wildlife in our tiny country may be rare, but sightings like this occur every now and then. So knowing how to live harmoniously with them is important.

According to the National Parks Board (NParks), we mustn’t feed wildlife, as this discourages the animals from returning to the wild. Instead, the best way is to not engage.